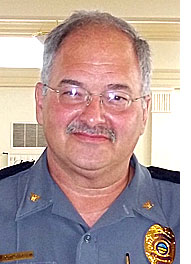 Police Chief John Grote announced that he is retiring from the force. (Yellow Springs News Archives)

After 25 years of community policing in Yellow Springs, Police Chief John Grote has announced that he is retiring from the force. Grote submitted his resignation to Village Manager Mark Cundiff last month. His last day of work will be April 22, 2012.

Grote had planned to serve the village longer in a job with aspects he truly loves, such as working with the schools. But after dealing with some chronic health issues, some of which were linked to stress on the job, he said, he and his family decided he should stop working.

“I was sort of forced to leave because of health reasons, though I would have loved to stay on longer,” he said this week.

Grote, 54, grew up in Yellow Springs and started his career as an officer in the Village in 1984. He took a short leave in the late ’80s, and then returned to become a sergeant and then captain in 1998 under Chief Jim Miller. He served as interim chief several times before Village Manager Rob Hillard hired him as chief in February 2005. Currently, Grote supervises 22 staff members, who make up a team of seven full-time and six part-time patrol officers (including one sergeant, Tom Jones), dispatchers and property management personnel.

The Village plans to initiate a search for a new chief later this fall, Cundiff said last week. The process could involve skills testing, which he is considering using to narrow the field of applicants to a handful of finalists, who can then be evaluated through an assessment center. The center uses a panel of retired police chiefs to provide an unbiased review of the best candidates as they are observed in simulated scenarios involving, for instance, a troubled citizen or youth, a disgruntled employee or a situation requiring strong leadership skills. Assessment centers were used to hire police chiefs in both Troy and Sidney, where Cundiff served as a planner and assistant manager. Cundiff also hopes to assemble a community review panel to gather public input on the process and the candidates.

Grote will not be part of the hiring process, but he plans to help with the transition once a new chief is hired, he said. He does not plan to continue working with the department after he retires.

The search for a new chief will likely begin in October, after Village Council has had a chance to decide how to reshuffle the Village management team. Cundiff proposed last month that Council reduce the staff by two part-time positions, including Village assistant planner and Village economic sustainability coordinator, and hire a full-time assistant Village manager. Council has heard the proposal but has not yet discussed its options.

In addition to these shifts in Village personnel, Dave Conley, superintendent of roads, has announced he is also retiring. According to Cundiff, Conley officially retires in January 2012, though he will leave his job in November. Conley supervises three full-time and one seasonal employee in the upkeep of Village streets, parks, the Bryan Center, and the stormwater and underground sanitary sewer systems. The Village plans to advertise internally to fill that position, Cundiff said.

While no one else has immediate plans to leave, four people in the electric department crew, including Superintendent Kelley Fox, are currently eligible to retire from the Village, as are Clerk of Mayor’s Court June Allison, and Village Finance Director Sharon Potter.