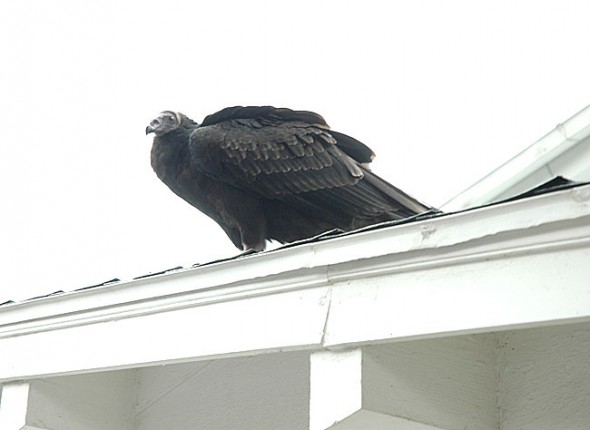 Tiny the juvenile turkey vulture headed back to the Raptor Center on Tuesday after spending a week downtown with the locals.

Tiny, a juvenile turkey vulture who has been all the buzz downtown this week, has returned to his previous home in the Raptor Center. The large black bird first appeared downtown a week ago, perching on the awnings at Tom’s Market, the Emporium, and the Senior Center, startling passers-by as he swooped from one local business to another, then showing up Saturday morning at the Farmers Market. He had no apparent fear of humans and could sometimes be found on the sidewalk near the Emporium.

However, his Raptor Center keepers were concerned that Tiny was becoming too comfortable with humans, and would never learn to live in the wild. He was captured on Tuesday by the Miami Township Fire Department and returned to the center. Tiny had been at the center since July, when he was left in a box on the doorstop of a Humane Society in Highland County, then only a white fluffy baby. He since gained considerable size and changed to black, although he was not yet old enough to have the red head of an adult turkey vulture.

One Response to “Tiny heads home”