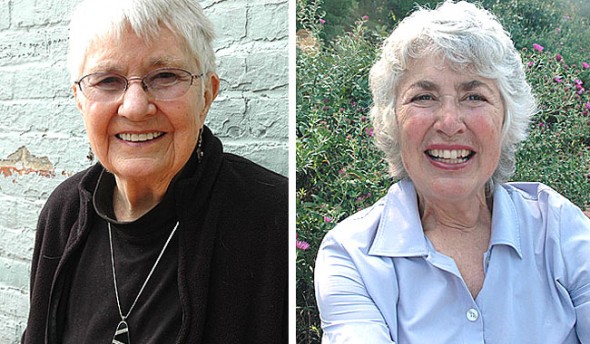 Mary Agna, left, and Macy Reynolds, were recently nominated to the Greene County Women’s Hall of Fame for their work in healthcare (Agna) and horticulture (Reynolds). The women will be inducted into the Hall of Fame on Saturday, Sept. 24, at the Walnut Grove Country Club in Xenia. The deadline for reservations is Sept. 17. (Photos by Megan Bachman)

When villagers Mary Agna and Macy Reynolds are inducted next week into the Greene County Women’s Hall of Fame, they will be among 23 other local women to receive the honor.

Dr. Agna, the first woman health commissioner of Greene County, is a 57-year veteran physician, healthcare professor and public health professional with a legacy of helping the poor and the elderly get proper care. Reynolds is a horticulturalist and gardening educator who was an early leader in the county’s Master Gardener’s program and has a passion for planting native species and using organic methods.

Agna and Reynolds are among six area women scheduled for induction this year into the hall of fame, which has honored 154 women in its 30-year history.

While Agna’s and Reynolds’ contributions to the entire county are being honored, the local women have also been instrumental to village healthcare and gardening efforts.

Agna, 86, pioneered in providing home health care services in the county, spent much of her career in preventative medicine and education and today still works toward increasing healthcare availability for all.

“Healthcare should be available and if people are in need, they should get help — especially senior citizens,” Agna said in an interview last week.

When Agna was the Greene County Health Commissioner, a post she held from 1963 to 1970, she initiated the department’s first home care program to send nurses and physical therapists into residences, brought an environmental health focus to the position and worked “on the fringes of politics” to organize community action on healthcare issues, she said.

That organizing led to the establishment of a food pantry, county support for services for the disabled and backing for new federal legislation creating Medicare and Medicaid to provide medical care for the elderly and poor.

Agna directed health departments in Clark County and Northern Kentucky, where she spearheaded a lead poison control program that brought inspectors into homes. She also served on the state Public Health Council, the primary rule-making body for the State Department of Health. Preventative health has been a major focus of Agna’s efforts throughout her career.

“My heart is in preventative services, which I find are the most important,” she said. “Unless you know the cause of something, you can’t treat it.”

Agna has taught at Wright State University, where she is today an interviewer for incoming medical students and a professor emeritus, and the University of Cincinnati, where Agna received her medical degree in 1950 and later started the school’s first residency in family medicine.

As a physician and volunteer, Agna has worked in clinics in Yellow Springs, Fairborn, Burma and Haiti. Though the health problems of the third world were especially distressing to see, Agna said that the U.S. is becoming more like those nations with its lack of health insurance coverage and, compared to many European nations, inferior social services. Recent federal healthcare reform doesn’t go far enough, Agna said. One solution in the U.S. is extending Medicare to all.

“I think there should be healthcare for everyone and the fact that we don’t have it is a problem for this country,” she said.

In Yellow Springs, where Agna has lived off and on for more than 50 years, she has served on the boards of Friends Care Community and the Yellow Springs Senior Center. The village is lucky to have good healthcare programs, she said, especially with the Senior Center’s home healthcare services and its occasional free screenings and tests.

Macy Reynolds is a lifetime gardener who has taught gardening around the county, including to juvenile delinquents; worked to plant native species and battle invasives, and advised gardeners on organic pest control.

A teacher by profession, Reynolds, 67, took on a horticultural mantle in her retirement, getting certified as a Master Gardener in 1998 and completing additional two-year courses in insects, weeds and trees (Reynolds is the go-to local expert in identifying and controlling weeds, she said). She headed the county’s Master Gardener program for two years and last year was recognized for completing more than 1,722 volunteer hours for the group.

Reynolds has also taught gardening programs around the county, including at the Miami Valley Juvenile Rehabilitation Center in Xenia, where she teaches troubled youth each spring how to grow and preserve their own food with a curriculum she designed. The knowledge might give the youth career opportunities, especially if they don’t go to college, Reynolds said. Plus, gardening can be transformative for anyone.

“You feel like you’ve accomplished something when you raise your own food — it’s empowerment,” Reynolds said. “And it’s a real connection — we get too far away from the process and lose the connection. We get lost out there.”

Reynolds has spent much of her time planting and promoting native plants, which attract local birds, insects and pollinators, improve the soil and require fewer inputs, she said. She was a founding member of the Midwest Native Plant Society, which has put on two native plant conferences in Greene County, and is an ambassador to the Ohio governor’s residence heritage garden of native species.

In her home garden on Orton Road, Reynolds experiments with different native varieties to learn how to deal with pests and “to make native plant gardening attractive enough for people to say that they don’t look like weeds,” she said.

There Reynolds tests new species to plant at the Yellow Springs Women’s Park, where she has volunteered for 12 years. At the Women’s Park, Reynolds recently tracked down the culprit behind overturned echinacea heads: a weevil that had been laying its eggs in them. Reynolds is also a Yellow Springs Tree Committee trustee and a member of the local Friendly Gardeners group.

Though home gardening is growing in town, according to Reynolds, villagers face continuing challenges from browsing deer and invasive species like the emerald ash borer, which may soon kill all of the ash trees in town. Looming climate change may increase invasives and threaten varieties like oaks and sugar maples, which might desert the village for northern climates, she said.

The Greene County Women’s Hall of Fame annually selects several women from its pool of nominations for achievements in the areas of arts, humanities, business, industry, agriculture, health, government, politics, sports, education, homemaking, the media and volunteerism. Nominees must be born in Greene County or have lived there for 10 years. Nominations for 2012 are due by June 30.