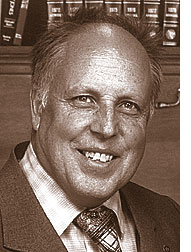 The second of four children, Richard was born Aug. 5, 1920 in Springfield, the son of Robert and Ethel Eastman. Richard was strongly influenced by his father, who originally came to Dayton to work for Arthur Morgan as a structural engineer on the conservancy district dams, and later taught at Antioch College under Morgan. Richard’s father ended his career in 1970 after serving 20 years as Clark County engineer. Similarly, Richard completed his working life by serving 24 years as Greene County engineer.

An excellent student, Richard was on the honor role throughout junior and senior high school and participated in Boy Scout Troop 15. After graduating from Springfield High School, he attended Antioch College. His first co-op job was with the Chicago Daily News at $15 per week. In 1942, he was drafted into Civilian Public Service, or CPS, as a conscientious objector and sent to the Mancos, Colo. CPS camp to work on an earth fill irrigation dam. He was later transferred to Germfask, Mich. and then to the Philadelphia Jaundice Unit. His contribution to the research was his failure to contract the disease.

At Antioch, Richard met Wilberta (Billie) Raecher. They married July 8, 1945 in a Quaker wedding held in the Methodist Church in Billie’s tiny home town of Wesley, N.Y. The couple lived in Philadelphia until Richard completed Civilian Public Service in June 1946. Although many people only knew Richard’s career as an engineer, his work life was highly varied, starting as midwest field secretary for Friends General Conference (Quakers) for four years. He then worked one year with Arthur Morgan at Community Service, Inc. When that ended, the Eastmans bought the Yellow Springs Bakery from Al Anderson in 1951 and made whole wheat bread and rolls. When the bakery didn’t provide enough income for a family that had grown to five, Richard bought a union card and became a laborer. As a union laborer, and later a carpenter, he worked for several construction companies on projects including the Springfield airport and I-75.

In 1956 Richard started at International Harvester Co. as a plant equipment designer. Company educational benefits allowed Richard to complete his Antioch College engineering degree in 1958, 20 years after starting. He continued working at International until 1967, when he was hired by Antioch College to teach civil engineering. What started as a one-year interim position became five, including one year as acting dean of students in 1969 and 1970, at the height of the Vietnam War and during turbulent times at Antioch.

Following his time at Antioch, Richard worked one year as acting executive secretary for the American Friends Service Committee in Dayton. In 1973 he was appointed deputy Greene County engineer, and then Greene County engineer in January 1974 to fill the remaining term of his predecessor. Richard Eastman was subsequently re-elected to that position until he retired in December 1996 at age 76. While county engineer, he was passionate about preserving covered bridges and played a major role in creating the Little Miami Bike Trail. He was known in engineering circles for creative resolution of conflicts between disputing parties.

One reason for Richard’s varied career was the Eastmans’ value for community. Early in their marriage they had made a commitment to living in one place, even if Richard would have to change jobs or even careers. Richard and Billie were part of founding the Vale, an intentional community, located just outside Yellow Springs where they have lived since 1955. Throughout his life, Richard was active in the Religious Society of Friends (Quakers), serving in many capacities over the years. He served six years on the Board of Friends Care Community, during which time the Assisted Living and Independent Living units were built. On a different note, Richard and Billie were active folk dancers and kept the community folk dance alive for many years. He and Billie also facilitated a long-running Course in Miracles study group until the week before his death.

Richard loved his family deeply. He is survived by his wife of 66 years, Billie, by four children, John (and Terri) Eastman of Yellow Springs, Rachel Newmann (and Bill) of Olympia, Wash., David (and Jean) Eastman of Cincinnati, and Roy (and Heidi) Eastman of Yellow Springs. He is also survived by 10 grandchildren and their spouses, and 13 great-grandchildren. He was known for some pithy sayings. When his first great-grandchild was born, he said, “I don’t think being a great-grandfather will be much different than being a grandfather, but what gets me is the thought of being the father of a grandfather.”

A memorial service will be held in Yellow Springs at the First Presbyterian Church Saturday, Oct. 22, at 1:30 p.m. Memorial gifts may be sent to Antioch College, c/o the Advancement Office, One Morgan Place, Yellow Springs, OH 45387 or the American Friends Service Committee, 1501 Cherry Street, Philadelphia, Pa. 19102.