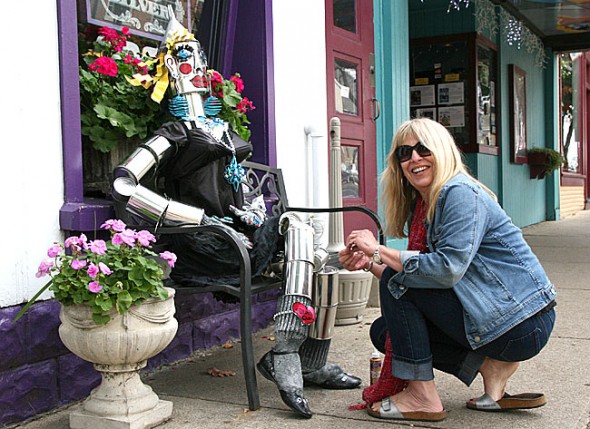 As if black birds were pecking at our downtown garden, scarecrows — 35 at last count — have been popping up over the last two weeks, looming over visitors and villagers coming to town to see the latest creations. Ye Olde Trail Tavern owner Cathy Christian came up with the idea last year, and this year she teamed up with downtown business supporters Bob Swaney and Mindy Harney to make it happen. Ohio Silver owner Marcia Wallgren was caught gluing gems on her Silver Queen’s shoes Tuesday. See page 8, and visit ysnews.com to see more of the creative creatures. See the bottom of the post for a scarecrow gallery. (Photo by Suzanne Ehalt)

What, are you yellow? Village celebrates the good scare

The scarecrows lining village streets portend a dark time ahead. This Halloween season, the zombie apocalypse arrives, with hundreds of the undead soon to be roaming our streets in search for brains; a monster’s ball will bring out frightening creatures to dance in the street; a slate of horror films will terrify all night long; and children will beg for candy while bonfires rise high into the chilly air.

Yelloween is coming, and the town is set to both attract tourists and to repulse them. The more than 35 scarecrows perched above downtown is the first sign that this year’s festivities will be darker but also more creative and prolific, thanks to some demented local organizers.

“It’s only appropriate for Yellow Springs to have a big Halloween,” said organizer Mindy Harney this week. “It’s a town that isn’t scared to dress up, that loves to be playful, creative and imaginative. Those are the things I think of when I think of Halloween.”

Behind the first scarecrow project are Harney and Bob Swaney, the same team that brought the Cirque Carnivals to Dayton Street. But the downtown shops have made the scarecrows all their own. The Little Art Theatre’s scarecrow dons a film reel for a face; Current Cuisine’s wields a butcher knife; a woman with a decapitated head and cutting shears stands in front of Wavelength salon. Harney said she hopes it will draw some tourists who don’t typically shop in Yellow Springs into the stores.

“I love the idea of people being out of their cars and walking around downtown,” Harney said. “It exposes our awesome stores.”

The scarecrows sit on 10-foot poles where American flags fly on the Fourth of July. Harney and Swaney worked with the Village to more than double the number of flag pole holes downtown so more businesses could participate and so it could be a larger exhibit. In addition to creating a definite “atmosphere” downtown, Swaney said, the scarecrow project is another way for the downtown merchants to work together to promote their wares.

“If we work together then we’ll get more people coming to town,” Swaney said.

In that spirit, a new group of downtown shop owners called Merchants Unite! has formed. Anyone is invited to participate in their monthly meetings, held the first Wednesday of the month at 9 a.m. at the Yellow Springs Senior Center.

For the third year in a row, zombies will take over downtown. The undead will come alive on Saturday, Oct. 22, from 5 to 10 p.m., with the walk beginning at 7:30 p.m. Though on the prowl for flesh, the zombies are also generous and the funds raised from suggested donations, raffles and activities will go to Home, Inc. and a local family in need.

The zombie walk is the brainchild of villager Tobi Dawson, who thought it would be fun to stage the zombie apocalypse in a small town (walks are typically held in cities). The response has been incredible, with an estimated 300 to 400 people showing up last year.

“It’s gory and it’s zombies, but people bring their kids,” Dawson said. “It’s not about blood and guts.” The event is family-friendly, organizers said. Last year baby zombies were pushed in strollers alongside 80-year-old zombies.

After this year’s walk the zombies will be encouraged to linger. Corry Street will be shut down and seven appropriately-named bands will play throughout the night, including DJ 501, Pretty Skeletor, Zach Parkman and the Damaged Goods, Love or Drugs and Dr. Meat. Vendors will help zombies with their makeup, take photos, sell zombie apparel and raffle off baskets of merchandise from local shops. A zombie wedding is even planned.

Zombies are encouraged to bring non-perishable food item for the Yellow Springs Food Pantry (last year three coffins were filled to the brim with food) and some money for local affordable housing group Home, Inc., which has helped organize the event, and the Gueth family to help the family purchase a Diabetes Assistance Dog for 9-year-old son Ashton. Though $10,000 was raised to purchase the dog at a Peach’s Grill fundraiser last month, additional money will help the family attend a week-long training with the dog.

A long night of horror

The Little Art Theatre will host the fifth and final all-night horror film marathon on Saturday, Oct. 22, starting at 9:30 p.m. and ending the next day around 11 a.m. Tickets cost $20, which can be purchased at the Little Art Web site (www.littleart.com) or the night of the event.

Former villager and Little Art board president Zach McGee, who relocated to Atlanta two years ago, is calling it quits this year after five years of running the marathon and showing 37 slasher, monster, alien and zombie thrillers. This year’s marathon will be “gorier but funnier,” according to McGee. He’s again kicking it off with Hitchcock’s Rear Window, “to get people in the mood,” McGee said.

“It’s not all slasher or monster movies,” said McGee. “It’s almost like making a mix tape.”

Next is Tucker and Dale vs. Evil, a “backwards redneck horror movie on its head,” and a bit sillier, McGee said. As the night goes on, fueled by Mountain Dew and energy drinks and delivered pizza, moviegoers will watch the more serious film Attack the Block. It’s the area premiere of the British monster movie. The new Blu-Ray edition of Zombie then promises to be both crystal clear and terrifying. Now late in the night, the classic Abbott & Costello Meet Frankenstein will lighten the mood slightly before the director’s cut of McGee’s favorite horror film, Alien, which he said is, “super scary.” And finally, if anyone decides to stay for it, he will screen the area premiere of the controversial Dutch film Human Centipede II.

“I won’t be shocked if the theater’s empty,” McGee said.

Over the last three years, about 100 people have crowded into the small theater, some traveling from as far as Virginia, to see the rare 35 millimeter versions and classics seldom screened. But the horror festival has never made money and McGee personally covered the losses from the marathon’s first year, when only 35 people showed up. Acquiring the films, some from studios long defunct, has been time consuming, and it has been costly. Some can charge from $200 to $500 for one night’s screening.

The marathon has been a labor of love for McGee, but those who have showed up have loved it too. The costume contest always brings out creativity and this year 50 classic movie trailers scheduled for the evening will add variety and fun. Attending a horror marathon is a unique experience, McGee said.

“What I like about horror movies and what the marathon offers is a participatory audience experience — people being together and being scared, grossed out, laughing together,” McGee said. “They offer the certain kind of experience. It’s the community coming together and going for a ride together.”

McGee said he hopes someone will pick up the mantle to keep the marathon horrifying audiences for many more years. If it’s resurrected, McGee said he feels okay about calling it the last marathon. After all, it happens all the time in horror movies, he said.

“We can kill it off and then bring it back.”

A monster of a time

On Saturday, Oct. 29, the village will be teeming with costumed kids and adults and many monsters. Beggars Night in the village takes place that evening, along with the regular neighborhood bonfires that blaze around town.

Downtown will also host Yelloween festivities, starting well before sundown. From 2:30 to 10 p.m., Ye Olde Trail Tavern, itself the site of ghostly hauntings, will sponsor a “Creepy Carnival” in King’s Yard with games for kids and adults and DJ “Hallow” Gene providing the music.

As the night wears on, Corry Street will host a Monster’s Ball, where DJ Dr. Falafel, known locally as Shane Creepingbear, will spin tunes from 8:30 to 10:30 p.m.

Also on Saturday zombies return for the choreographed dance to Michael Jackson’s “Thriller” as part of a simultaneous worldwide performance. YS Dance is sponsoring the performance, which starts at 10 p.m. at the John Bryan Center.

Yelloween is not the vision of the Chamber of Commerce, or any single group in town. That its frightening, fun and imaginative festivities have come from businesses and villagers is a good sign, according to Chamber of Commerce executive director Karen Wintrow.

“These new events are coming from the community, they’re homegrown,” Wintrow said. “It speaks to the kind of community we are.” 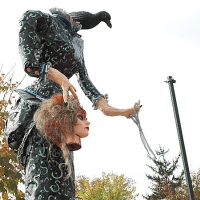 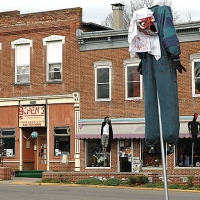 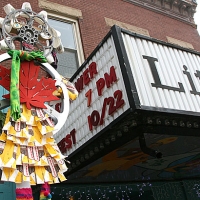 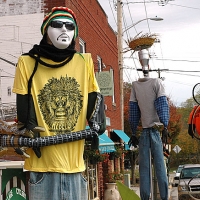 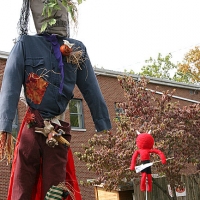 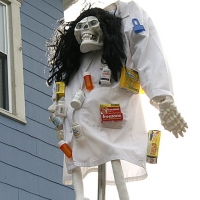 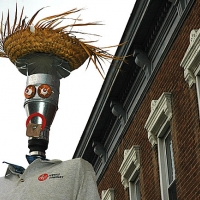