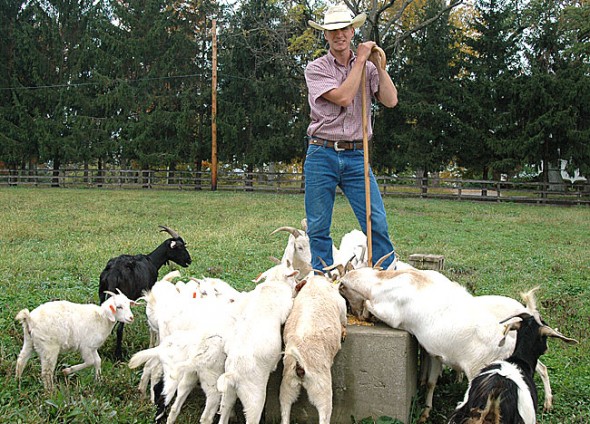 Local goatherd Owen Betts tended his flock at Whitehall Farm this month. Antioch College recently hired Betts’ goats to chew through the overgrown weeds at its farm to make way for a food forest. The goat mowing service is available to anyone with a weed problem. (Photo by Megan Bachman)

He lets the kids play in poison ivy

While some kids on the Antioch College campus are digesting new information, others are munching on weeds. A herd of goats recently chewed through years of neglect at the Antioch gardens, ridding the area of poisonous plants and invasive species to make way for a food forest.

Antioch chose to hire local goatherd Owen Betts’ hungry flock instead of applying chemicals or firing up a fuel-guzzling tractor or mower. And the 11 ruminants, who took three days and nights to clear one-eighth of an acre of dense weeds, ate some of their favorite foods while fertilizing and tilling the land with their hooves.

“I think it’s a pretty responsible way to clean up an area,” Betts said in a recent interview. “The goats clean it up but don’t damage the land.”

Betts is now offering his goat mowing service to anyone with a patch of land that may have gotten out of control. He charges a $50 set-up fee to erect a battery-powered electric fence to pen in the goats and then $150 per day for their hard work. Betts also sells free-range goat meat for $125 per animal.

Goats are the logical herbivore to use for land management, Betts said. Chickens would take years to clear an area that goats can tackle in days or weeks. And sheep and cows prefer good grasses to undesirable weeds.

“The goats will dodge grasses to go for poisonous plants,” Betts said. They favor poison ivy, poison oak and poison hemlock, a particularly prevalent problem at the former Antioch gardens.

As an alternative to traditional landscaping, goat mowing can be a boon. The land isn’t compacted by heavy equipment, pollution is avoided, fuel conserved and machinery saved from stumps and obstructions. Costs can be lower since animal power is cheaper than manpower and there are no haul-away costs. Desired plants, shrubs and trees can be protected with cages. Plus goat poop adds nutrients back to the earth.

“The goats restore what they have taken away,” Betts said.

Goat mowing is ideal for places overgrown with invasive species like honeysuckle or vacant properties neglected for years.

“The goats are great to clean everything out of an area, see what you have, then make a decision,” Betts said. “They get it to a manageable level.”

The goats also provide entertainment while they work. One recent customer had a goat-viewing party and human kids always enjoy feeding their four-legged visitors some fresh grains.

“Watching a goat is better than watching someone with a lawn mower,” Betts said.

The herd of 25 goats spend most of their time at home on Whitehall Farm, where Betts moved last year with his wife, Chanel, and three children from Ventura, Calif. In the herd are 12 pregnant does, alpha female Broken Horn, loner Jimmy the Buck and other goats named by Betts’ children — among them Suzie, Big Whitey, Banshee, Treehouse and Ziggy.

Betts, 25, got an interest in, and taste for, goats while on military tours over the last six years in Iraq and Kuwait as a Navy Seabee. There, goat was a delicacy, best served with a lot of garlic and a marinade. Betts had hoped to introduce more Americans to the relatively lean, vitamin-rich and easily digestible meat that tastes like lamb and has the texture of venison. But most of his meat customers have been families of Middle Eastern, African or Spanish heritage as those cultures traditionally consume goat meat.

Though Betts’ Navy friends mocked his ambition to raise goats, Betts followed up on his lifelong dream to farm, moving to the area to be near the 200-year old family farm in Pitchin in Clark County where his mother grew up. Betts’ grandfather, former Yellow Springs School District Superintendent Lloyd Benham, also lived on that farm.

One day Betts let his goats loose on an overgrown part of the Whitehall property, and noted their quick work of the weed-ravaged area. He found that goat land management is common over large tracts of the western states, including national parks and roadsides, and decided to offer the service locally.

Because goats eat more in sunny, warm weather, spring and summer are the best times to book the herd, Betts said. But he’s giving quotes and taking reservations now.

For a free goat land management quote or to purchase goat meat, firewood or hay, contact Betts at buckihillz@yahoo.com or 937-926-3206. 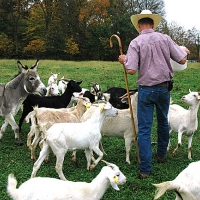 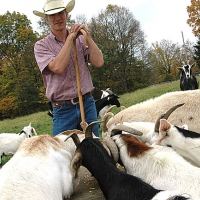