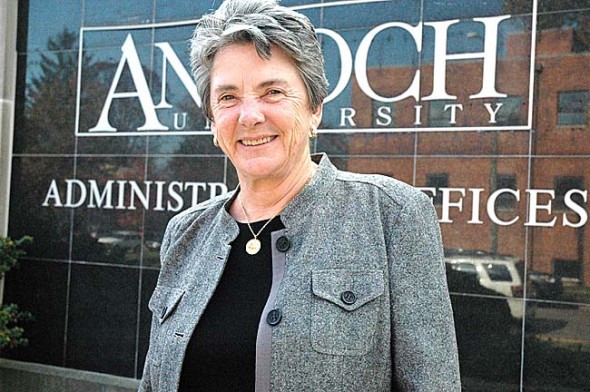 Antioch University Chancellor Toni Murdock will retire in June after six years in the position. Murdock led a major transformation of the university, including its separation from Antioch College. (Photo by Megan Bachman)

Antioch University Chancellor Toni Murdock, who led the school during a time of both significant controversy and critical institutional changes, will retire in June, after six years as chancellor and a 40-year career in education, the university announced last week.

During her tenure, Murdock, now 66, steered Antioch University through its separation from Antioch College, which the university closed in 2008. She also helped to create a new governance system, increase the university’s financial reserves and arrange new offices for the university administration and its public radio station WYSO, according to university leaders.

“Toni has really done a terrific job of guiding the university through some very tumultuous times to the stable situation we’re at now,” said Antioch University Board Chair Larry Stone.

Six years after Murdock took charge, the institution has a new board of trustees at each of its five campuses — Midwest, Seattle, New England, Santa Barbara and Los Angeles — a new slate of campus presidents and 12 new university board members on the 14-member board.

Headquartered in Yellow Springs, Antioch University is a tax-exempt, accredited university with about 4,000 adult students in undergraduate degree-completion, masters and PhD programs. The university’s revenues last year were just under $68 million.

“It truly has been a dream come true to find an institution that so closely fits with my own values and to have an opportunity as a woman,” Murdock said this week, in also describing her tenure as a difficult challenge worth her time.

Murdock stepped into the role of interim chancellor in the fall of 2005 while still the president of Antioch University Seattle. When the search for a new chancellor failed, Murdock was named the chancellor the following year.

Murdock was surprised by the extent of the university’s financial challenges when she arrived. While the university’s other campuses were financially stable, deficit spending at its historic undergraduate liberal arts college, Antioch College, was depleting university reserves, she said.

“If something drastic wasn’t done, the whole university system would’ve gone down,” she said. Murdock reported to the university board in 2006 that the university would be bankrupt within 18 months, information that Zucker said was critical in the board’s 2007 decision to suspend operations at the college in June 2008 and later separate from the college.

“She was able to present thoroughly and passionately and with anguish what occurred,” University Board Vice-Chair Art Zucker said. “Toni’s efforts of clarity of the operation … were instrumental to what [the board] had to accomplish in the transfer of assets.”

Though national press coverage of the Antioch College closure created public confusion about which university campuses were still open, the separation of the two entities was largely positive for the university, Murdock said. In addition to giving the college its long-desired independence, the university benefited financially after the separation.

“The alums strongly felt the only way the college would succeed is if it separates [from the university],” Murdock said. “That way both the university and the college could move forward. Although it was painful at the time, I’m not sure it could’ve happened any other way.”

The university increased its financial reserves from $3 million in 2008 to $20 million today and has since built its endowment from scratch to $7.5 million. Partly that increase is due to not having to bail out the college financially, and partly due to university campus presidents becoming more enthusiastic about fundraising following the separation from the college, Murdock said.

The financial boon has been invested in other campuses and in system-wide projects, Murdock said. New facilities were built for Midwest and Santa Barbara and a new location is planned for the Los Angeles campus. In addition, the university centralized its technological support, developed a virtual library and learning commons and invested in new programs. The university now might add new campuses.

“We’re not confined to five campuses,” she said. “We’ll focus on continuing our growth and expansion.”

Murdock presided over a shuffling of offices at the university. Next year public radio station WYSO will move its studios into the university’s former administrative offices, which are being upgraded for $1 million. And about 50 university staff members will take up residence in the Creative Memories office space in an arrangement that was finalized last month. The university’s staff for its Antioch Education Abroad program and PhD program moved onto the Antioch University Midwest campus earlier this year.

Murdock also created new leadership positions at the university and spearheaded the development of a more distributed governance system. Three new vice chancellor posts were added, in academic affairs, advancement and technology, in order to build a stronger central administration, she said. In 2009 a board of trustees was instituted at each campus to advise and collaborate with the university board and administration. And there are plans for a new university-wide organization to provide for faculty input across the campus.

Zucker said that before the university had five “very independent” campuses and that Murdock crafted a structure that had no precedent for the institution. Implementing the new organizational structure took perseverance and a “strong belief in collaboration,” Murdock said.

As a measure of the university’s success, Murdock pointed to several recent university honors, including two awards for community service, an award from the National Education Association and the National Association of Independent Colleges and Universities and inclusion for the first time under the category of regional universities for Antioch University Los Angeles, Santa Barbara and Midwest in the annual U.S. News and World Report for 2012 of top schools nationwide.

Challenges for the incoming chancellor, for which the search has begun, include maintaining or reducing tuition at the campuses, collaborating with community colleges, reaching underserved communities and expanding offerings, Stone said.

Murdock, for her part, is ready to move on. Having sold her home in Yellow Springs, Murdock will retire to Oracle, Ariz., where she already is living part-time.

“It eats up your life, it’s all-encompassing,” she said of the job. But a career in higher education has been worthwhile, she said.

Murdock began her education career in 1970 as a high school teacher. A New Mexico native, Murdock received her PhD from the University of Arizona, Tucson, in 1986, with a specialization in higher education finance. In 1997, she became the first female president of Antioch University Seattle, where she served for nine years. She was also Antioch’s first female chancellor. Prior to working in education, Murdock was a municipal and county judge.

“I truly believe in the power of education and it is the one thing that can never be taken away from you,” Murdock said. “It’s really a flame inside me that burns. I doubt that I’ll stay away from it completely.”