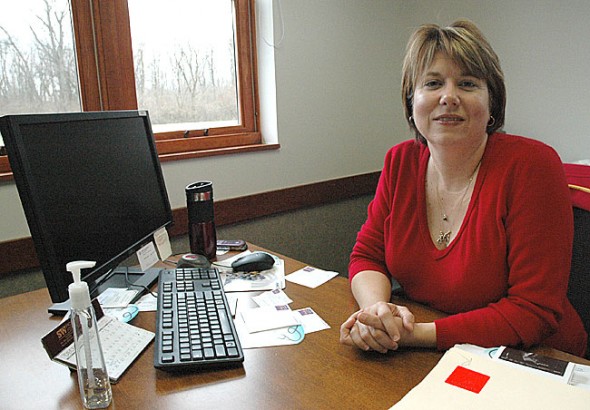 A passion for women’s health

When she talks about why she chose to specialize in women’s health, Dr. Jennifer Frey frequently uses the word “empower.” She wants to empower women to give birth in the way that they want and beyond that, to make the choices that keep them healthy and strong.

“When I went to medical school I never thought about doing anything else,” she said in a recent interview. “I’m drawn to caring for women throughout their life.”

Frey is now offering her services to Yellow Springs women. In August, she joined the office of Dr. Keith Watson, who has practiced obstetrics and gynecology in the village for more than 30 years, most recently at his Kahoe Lane location. And already, she’s experienced the sort of relationship with her patients that she hopes for, that of being “more than a doctor, becoming a part of their lives,” Frey said.

An OB/GYN such as herself can start out helping a woman through the birth of her child, then stay with the patient throughout her life, a trusted advisor on health issues. Frey sees that sort of relationship between Watson and his patients, she said, and appreciates “having an excellent role model right down the hallway.”

And while she cares about delivering healthcare to all ages of women, Frey has a special “passion for obstetrics.” Whether a woman wants to experience each moment of the often painful birthing process or have an epidural that blocks out the pain, “I support wherever they are,” she said. “I want the birth to be as empowering as it can be.”

And Dr. Frey knows quite a bit about the childbirth experience, having had four experiences of her own. She and her husband are the parents of girls aged 14, 12, 6 and 10 months.

Like many women, Frey came to her profession in an unorthodox way. She worked for 10 years as an electrical engineer after having received a degree from the University of Dayton. But after a while as an engineer, she began longing for an earlier dream, that of working in healthcare.

“I didn’t feel I was making a difference in someone’s life every day,” Frey said.

Her own birthing experience led to Frey’s interest in offering childbirth classes, which she did in her home. She also trained to become a doula, a woman who offers both physical and emotional, but not medical, support to women giving birth. It’s the sort of support that women in many cultures receive from their mother, sisters and aunts in their extended family, Frey said, adding that in this country, many women lack that support.

Initially working as a doula on top of being an engineer, Frey felt more and more compelled to work in women’s health, and gradually focused only on her doula work. When she found herself wanting to go further with women’s health, she contemplated becoming a doctor.

After “much thought and consternation,” she entered Wright State Medical School. At the time, she already had a 3-year-old and a 5-year-old, and she later gave birth to her third child in her last year of medical school, and later her fourth while completing her residency at Miami Valley Hospital. She credits a supportive husband and family — both sets of grandparents are in the Dayton area now — with helping her pursue her career dream while also raising four children.

And as a mother, Frey is not only familiar with childbirth, but with the difficult choices that all women make.

“At times it’s hard on them,” she said of her children. “But they know there’s a reason for the hard work.”

Frey, who lives in Centerville with her family, delivers most of her babies at the Miami Valley Hospital, which offers “the full spectrum” of birthing options, including a special unit called Family Beginnings that specializes in natural childbirth, including water birth options. And after women give birth, Frey hopes to stay involved throughout their lives. When they come in for their annual Pap smears, she’s able to talk with them about their ongoing health needs, along with the needs of their daughters.

In her new position, Frey is also becoming more skilled in robotic surgery, under the guidance of Dr. Watson, who has been an area proponent of the new surgical techniques. Directing the surgery from a computer screen but using an actual robot to make the incisions, the physician is able to manipulate instruments “in a more precise way,” she said, resulting in fewer incisions and less blood loss during surgery. Robotic surgery can be used for a variety of women’s needs, including hysterectomies, diagnostic pelvis exams and the removal of fibroids. Miami Valley Hospital currently has three operating rooms equipped with surgical robots.

With four children, Frey knows about the challenges women face when balancing work and career. But she has no regrets regarding the choice she made to become deeply involved in the health care of women.

“It’s hard but it’s worth it, and I knew it would be,” she said. “I definitely made the right decision. I enjoy coming to work every day.”