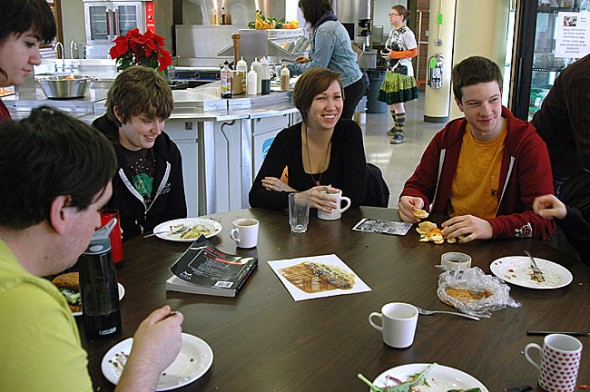 Antioch College students recently ate lunch in their cafeteria, which serves mostly non-processed food increasingly sourced from the campus farm. The Antioch experience so far has been stressful but rewarding, said students, who have to go to class, do homework, work on campus, govern themselves and cook for one another on weekends. At the table are, from left, Eros, Eva Erickson, Jennifer Carlson and Elijah Blanton. (By Megan Bachman)

It’s Sunday night on the Antioch College campus and while some students are studying, others are cooking a meal they planned for fellow students. Chopping up onions and carrots for two shepherd’s pies — one with grass-fed beef and the other gluten-free and vegan — Ethan Kellaway shared his thoughts on the school year thus far.

“It’s worthwhile building the school back up … but it’s very busy balancing all of the jobs we have,” he said, repeating a common feeling among the first class of 34 students at the revived college. Not only are the students expected to go to class, do their homework, work on campus, cook for one another and govern themselves, they are also being leaned on to remake a college.

The exceptional group of students, undergoing an exceptional college experience, vacillate between stress and excitement, frustration and optimism, and feelings of isolation and connection as they work to get the school up-and-running. They have a lot of responsibility, and a lot of pressure on them, to revive the college, they said. In the words of student Adam Abraham,“we’re setting the stage for future generations of Antiochians.”

Louise Smith, dean of community life, said a lot is being asked of these students, but that they’re handling the pressure well.

All eyes are on the students, who received full tuition scholarships in exchange for the risk, and reward, of helping revive the college. Bringing back the historic liberal arts college is not without its birth pains, but students, staff and faculty are confident that the Antioch model is working and that the institution has a future.

“Everyone’s pretty committed and had to be pretty committed to come here,” said Katie Wiebke, a student. “There’s a lot of pride for the school. It will be exciting to see how it can grow, we’re just overwhelmed with the new experience.”

“[The workload] is limiting our ability to get engaged and work on things, to have more input in student life and dive into the governance model,” student Eva Erickson said. “And we still need time to be human.”

Between the time commitments and the small student body, the experience can be intense, but also rewarding, students said. Among their responsibilities, the students work 10 hours on campus, or for a local non-profit, cook on the weekends and participate on various campus committees along with faculty and staff. Community governance has long been a facet of the Antioch experience, but some of the students said they haven’t felt ownership over the model that was handed to them.

“There was a grand plan in place before we got here and it feels like we’re only getting in the way,” said Eros, another student.

Smith helped create the new governance model, in which small groups propose concrete policies rather than deliberating in a large assembly. It is still a work-in-progress, she said.

Students will soon weigh in on faculty searches and hires and have already begun to impact the college, especially in dining service, she said.

“Education becomes so purposeful because you’re so close to the mission of the institution,” he said.

In addition to the hectic pace of campus life and the heavy responsibilities to shoulder, the smallness of the school is perhaps its most distinctive feature so far. Reflecting on their Antioch experience as the first semester comes to a close, nearly all students commented on the college’s size, which affords a close knit group while limiting options for extracurricular activities.

“It’s really awesome because we’re a family, but you don’t get that flow of humanity,” said Wiebke. Fellow student Sam Senzek said it’s not uncommon to walk from one edge of the campus to the other without seeing another soul, which she finds disheartening.

Everything is small at the college, which has just six full-time faculty positions, but that means more interaction between students and faculty and also between students and the administration. Wiebke appreciates that staff are accessible and even participates in a small group committee meeting with “Mark,” or Mark Roosevelt, the college’s president.

Adam Abraham said that at a college leadership conference for students of color, he heard students lamenting the “great institutional hurdles” to impacting decisions at their colleges, while reflecting that “we don’t have those” at Antioch. Maisie Taibbi said there is less of a hierarchy at Antioch, which results in more discussion-oriented classes and active decision-making by students.

“I think there’s a collaboration between students and staff,” she said. “We haven’t separated ourselves from each other. There’s a conscious effort to find similarities.”

Antioch feels especially small because of its location within a small town, students added. Taibbi, from Pittsburgh, recently took a job at the Emporium so that she could meet more people in such a small place.

“The town is really part of campus if you make it that way,” Taibbi said. “Yellow Springs is really a special place with lots of possibilities.”

At a recent literature and science class, professor Geneva Gano asked student Eros if he had completed the assigned reading for the literature class, to which he responded:

“I rigorously skimmed it.”

The courses have been a highlight for many students, who find them engaging and as “rigorous” as President Roosevelt promised.

“Rigor is good for fundraising dollars, but not as much in the implementation,” said Elijah Blanton, who finds the block system too challenging, even though he’s able to get through the three-hour classes with a thermos of coffee. Next semester the load will get even greater as students find themselves adding a foundation course, Blanton said. Of course, he plans to emphasize this rigor himself as he takes a job for the college’s annual fund.

Especially strenuous has been the global seminar course on water, co-taught by the chemistry and philosophy professors, which students said seemed unorganized and too laborious for a two-credit hour course.

Other students appreciated the water seminar’s field trips and the student presentations they heard on the quality testing of a nearby river, composting toilets, and Antioch’s water system. In the literature and science class, taught by Geneva Gano, students said they’ve enjoyed creating almanacs with their own nature writing and ecological observation.

“The goal was to capture the attention of students who might not consider themselves literary-minded and bring them into the study of literature,” Gano said of the combined course.

Rahmanian said students gave overwhelmingly positive feedback on the first block courses and that changes will be made to how the global seminar is designed in the future. A draft syllabus for next semester’s food seminar has been posted for student feedback and the college chef and farmer have weighed in on the food seminar curriculum.

Some students said Antioch alumni were surprised to hear that the students were being given letter grades in addition to professor-written narrative assessments and self-evaluations they were required to complete. Letter grades were added so as not to jeopardize accreditation from the Ohio Board of Regents. Rahmanian said that, “adding letter grades doesn’t take away the importance of the qualitative feedback.”

Even though the revived college has only been open for two months and the students have yet to embark on their first co-op, they are glad for the experiential education model that is seminally Antiochian. All students are required to work 10 hours a week, either as a Miller Fellow at a local nonprofit or at a job on campus.

Abraham, who works for the Yellow Springs Tree Committee, said he never would have been interested in identifying trees until the committee chose him. Now he’s grateful for the knowledge.

Senzek, who works on the college farm, enjoys working outside, being directly involved in her own food production and using what she learns in the classroom in the real world.

“It’s not something I would’ve pursued on my own, so it’s great that it’s incorporated in our education,” Senzek said. “I like having theory and practice at the same time. Most college students have the theory and then wait four years to get the practice.”

Senzek recently woke at 7:30 a.m. to load the broiler chickens she had been feeding into a truck to be taken to slaughter. Later that day, students and staff members dined on fresh, locally-raised chicken, which Senzek described as an amazing learning experience.

“It’s rewarding to know what’s being used rather than food from factory farms,” she said.

Students joked that when they go downtown, villagers often approach them saying “So you’re one of the chosen ones!”

The group of students, who hail from 16 different states and are diverse in age and interest, share some common characteristics that may help them overcome the challenges. They are eager, curious, adventurous, idealistic, engaged, passionate, serious, committed, careful, thoughtful, and optimistic.

Having taught at UCLA and Stanford, Gano said she was impressed by Antioch students, who were more artistic than expected.

“I haven’t seen so many creative minds and students who are ready to jump into a challenge,” Gano said. She said that despite her own heavy workload, she came for the students, and she hasn’t been disappointed.

“These are the students I wanted to teach,” she said, adding that they are explorers who love to interact with the outside world, thoughtful to one another and highly talented.

Smith said each student is a “soulful individual” who came with his or her own struggles but has been “game” to help rebuild the college. Since it’s not accredited, the students are taking some risk in attending Antioch. But their commitment to and passion for Antioch continues to help the students survive a time-constrained and intense campus experience.

“I think everyone’s pretty committed because you had to be pretty committed to come here,” Wiebke said. “Sometimes it’s that selfish half of you that thinks, ‘why didn’t I come here in three years when everything’s ready?’”

“It’s definitely a risk,” added Taibbi. “But the college has a reputation, a past. I don’t think I’d be as confident without that.”

Most students are generally optimistic that the college will continue to attract new students and new funding. In fact, recruitment for next year’s class is going well, according to Cezar Mesquita, dean of admission and financial aid. The college has received 50 percent more inquiries than at the end of recruitment last year and already six students have applied.

“Right now things are looking promising,” Mesquita said, adding he is “cautiously optimistic” the college will meet its Fall 2012 admission goal of 75 students, including 15 on full tuition scholarships and 60 who receive a more traditional blend of need and merit-based scholarships. Federal financial aid assistance won’t become available until at least fall 2013.

“We were selling the dream,” Mesquita said. “The difference is now we can provide tangible evidence of what we’re doing.”

Mesquita said he will rely upon the current students to spread the word, host prospective students and be ambassadors of the institution. And as the students add these additional responsibilities, life on campus may become even more taxing. But Smith said she believes Antioch students have always been a special group willing to take on tough tasks.

“Many of our students come with a story and have overcome adversity,” Smith said. “They’re not doing what’s easy. They’ve looked for the difficult — they still do.”

One Response to “Antioch students assess their year”