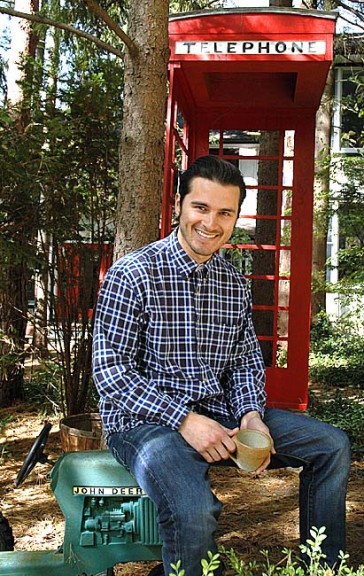 Yellow Springs native Michael Malarkey has hit the big time playing Elvis Presley in London’s West End theater district, in the hit show “Million Dollar Quartet.” He’s shown recently when he returned to the states for a visit at the Littlewood home of his parents, Jim and Nadia Malarkey. (Photo by Lauren Heaton)

According to former Yellow Springs resident Michael Malarkey, no matter how much acclaim he has received before, no actor is ever guaranteed to work again. That goes for those who have hit the big time, as one might say of Malarkey, who has spent the year playing Elvis Presley in the West End production of “Million Dollar Quartet” at the Noel Coward Theatre in London.

Malarkey was home last month on a break from the rigorous schedule of eight shows per week, while his understudy performed in his stead. He spoke with the News about facing shyness and taking risks on his journey to London’s Broadway to play the king of rock and roll.

When Malarkey plays Elvis, he takes the characteristic wide-kneed stance and croons a beautiful rendition of “Peace in the Valley.” The soft Southern accent and pouty lips come through, too, in the show about the December day in 1956 when Presley, Johnny Cash, Carl Perkins and Jerry Lee Lewis made a legendary recording at Sun Records studio in Memphis. But to Malarkey, his job is not to impersonate his character but rather to provide a vector for Elvis that can come alive on stage. That was the approach that won him great praise in his lead roles in the London shows that preceded “Million Dollar Quartet,” and it was also part of the lift that pulled him out of his shell as a young person.

“I was a shy kid — really, really shy,” he said in an interview last month.

But shyness never stopped him from getting up on stage. Malarkey got his first performance experience in the YS Kids Playhouse shows he did with Director John Fleming, including “Bonanza Valley!” and “The Oracle’s Mouth.” Still, quiet and deeply bored with middle and high schools in Yellow Springs, Xenia and Dayton, Malarkey was in for a change and a challenge when his family sent him to live with his aunt and uncle in the French West African country of Cameroon. Armed with a year-and-a-half of “really slacker high school French” and the attitude of a 17-year-old, he was surprised to find that he won instant popularity at school, mostly for being American. Analyzing Antigone and doing math in French was really tough, but Malarkey came out socially in a way he hadn’t before, he said.

As though his year abroad had opened his eyes to the wide world he had yet to know, he returned to Yellow Springs feeling unprepared to go to college.

“University teaches you how to learn, how to analyze things, and if you don’t have a reference point within yourself, it ends up being very general,” he said. “It’s scary if there’s no focus; almost worthless.”

So instead, Malarkey started a band. And then he snagged the lead singer role with Shadyside, a band well-known in the area for its “post hard-core screamo punk stuff,” he said. They went places, touring the Midwest for almost five years and recording an album in Nashville, where Malarkey was perhaps already hearing murmurs about his future.

Maybe it wasn’t clear to him then that his path was already before him. Or perhaps he wasn’t confident enough to say it out loud. But Malarkey was at home on stage. “Dead scared” at first of the expectant faces and the potential for disapproval, he quickly learned that as the front man in a band, there is nowhere to hide, so it may as well be all or nothing.

“I was the singer, and that really made me have to not appologize for myself on stage,” he said. “It was like, okay, you’re here to see us? Let’s do this!”

And he thrived on the intimate bonds that a high energy performance creates, almost necessitates, between performers. It’s trust on stage that allows the players to relive their “story” in front of each audience night after night, as though it were the first time, Malarkey said. That goes for heavy metal as much as for Shakespeare.

When he got a call from Fleming asking him to audition for the role of the villain in a production of “The King Stag” at Sinclair Community College, he took it. And he was recognized for his work. The play itself won acclaim, and Malarkey won a DayTony award, an Irene Ryan nomination, and best breakthrough male performance for 2004–05 from the Dayton City Paper.

The boost was all he needed. The following year, after a summer session at London’s Royal Academy of Dramatic Art, Malarkey was accepted as one of the few Americans at the London Academy of Music and Dramatic Arts. He graduated two years later with a B.A. with first class honours and gold distinction skills in stage combat.

Even with credentials and an agent, Malarkey still had to earn a living. He spent the first 10 months after school waiting tables before landing the lead male part in two plays, “Spring Storm” and “Beyond the Horizon,” produced in tandem at the Royal and Derngate in Northampton. The productions were so successful they were transferred to London’s National Theater, a dream for Malarkey, who had always wanted to work in a theater with such legacy.

The work was intense, requiring that he learn two shows at once and perform them both throughout the week, sometimes back-to-back in the same day (in the style of repertory theater). And packing a 300-seat theater at the National meant that he had to be “on” every single night, even if he wasn’t. That, plus the length of the run, at both locations, tested the work he had done to learn how to be in the moment on stage. The rigor included daily exercises to remove personal tension from both the voice and the body in order to enter a neutral space from which he could react authentically on stage.

It’s similar to what Malarkey now does in his nearly 250th performance as Elvis. Except this show required intense vocal stamina to be able to belt out almost 30 songs every night, twice on Thursdays and Saturdays. Even the singing he had done with the band wasn’t comparable to the demands of the current show, which he simply cannot do unless he is in top form.

“I’ve never been in a show that demands so much discipline,” he said of both the singing and the show’s physical energy.

But Malarkey is grateful to have the opportunity to settle into a role and take some risks.

“Acting is so much about failing,” he said. “School makes people think there is a right answer, but you can’t always do the right thing…so much about acting is reacting, feeding off of what someone else has given you.”

When the current show ends in January, Malarkey will be called to react to the job market again, and he knows he could very well be waiting tables again. But he long ago pushed past giving up, a choice that has already claimed the acting careers of several of his LAMDA colleagues. When, diploma in hand, his prospects still seemed meager, he made a decision that he would get a job acting.

“I told myself I have to do this, because there’s nothing else.”

Malarkey’s brothers Daniel and Kevin are in the acting and filmmaking business too, which means their parents, Nadia and Jim Malarkey, must have similar faith in the fruits of hard work, persistence and change.

In his life as a singer, Malarkey found the experience he needed to be able to play one on stage. So the time spent off stage has a purpose too. And as long as the commitment is there, he knows he won’t be off for long.

“It’s not like things have to be like that forever. I have several lives in me — that was me then, and this is still me now, with a different set of priorities,” he said. “It’s really about getting up and trying again.”