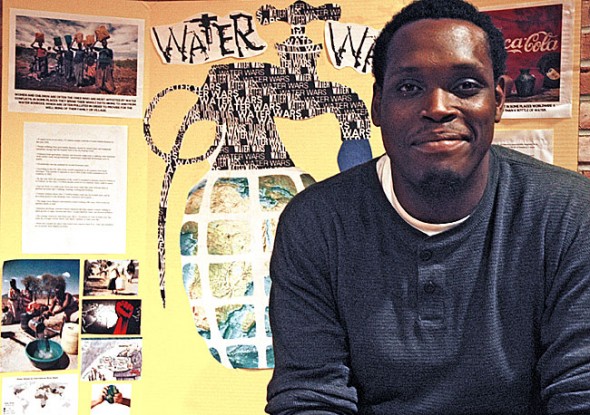 Antioch College student Adam Abraham researched the history of global conflicts caused by the scarcity of water as his final project for the global seminar on the topic of water. All 35 students presented their final projects at McGregor Hall last Wednesday. (Photo by Lauren Heaton)

The entrance gallery at McGregor Hall was packed last Wednesday with students from Antioch College’s opening semester global seminar on the broad topic of water. Rachel Smith and Megan Miller stood beside their posterboard, gesturing with animation to explain their work to the Antioch community invited to view it. The seminar had inspired them to dig into the issue of hydraulic fracturing in the area, and they had used their findings to mount a public education campaign for the Clark and Greene County residents that are currently being asked to decide about fracking in their neighborhoods.

Right next to them, Antioch student Dustin Mapel spoke just as fervently about his idea to develop a new water usage plan for the college, including a rainwater catchment basin, a wastewater treatment process that fertilizes the campus garden and a cost estimate that wouldn’t nauseate the president. Students Ethan Kellaway and James Russell were also enthused about their recent chemical study of the Hebble Creek watershed that proved that the industrial pig farms in Greene County were not adversely affecting the watershed, which is currently within EPA pollutant limits.

Having approached the topic of water through the disciplines of art, science, history, literature, environmentalism and political science all in one semester, faculty members Lewis Trelawny-Cassidy and David Kammler, who led the college’s first global seminar, received a range of final projects that reflected their integrative model. In this contemporary incarnation of a liberal arts education, the global seminars are designed to help students understand the complexities and nuances that are involved in the decision-making that occurs in any system, Kammler said before the presentation last week. The aim is to encourage students to reflect on and integrate all of their learning, Trelawny-Cassidy said, and to help students become effective thinkers on major world issues, Kammler said. And ultimately, being able to perceive the interconnectedness of science, economics, psychology and politics regarding any issue will help students to be effective agents of change, he said.

“We wanted to help get them excited about [creating change], talk about how you go about practically doing it, and then how you let your passion drive you to get something done,” Kammler said. “It’s learning with a purpose, and it’s through a liberal arts education that students become effective citizens.”

Working with Green Environmental Coalition leader Vickie Hennessy this semester, Smith and Miller learned about the chemistry and mechanics of fracking and the process by which gas companies have attempted to lease private land to extract natural gas in Greene County over the past two years. They researched the degradation that fracking can cause to the rivers, streams and fresh water aquifers of an entire region, and realized that instead of a theoretical problem, fracking is a threat right now, right here in Yellow Springs.

“It was shocking — I was horrified,” Smith said of what she learned. “I knew it was important not to become emotionally attached to this issue, but it’s local, and personally we don’t want to do it and we don’t want people we know to do it.”

So they became attached, a little. They created educational packets to distribute to the residents in Fayette County, where fracking is currently a possibility. And they scheduled several screenings of the fracking film Gasland at both Cedarville University and the Xenia public library. They will continue to work on the project when they return to Antioch after the holidays, but they have intentionally limited their activism so that they can focus on their school work, they said.

According to Trelawny-Cassidy and Kammler, the seminar guided students to push for things they believe in and think about how to implement their own creative ideas. Many of the projects reflected a range of investigation students had to do to understand how hard facts would influence their ability to convince others of their beliefs. Cost estimates, for instance, were a big part of Mapel’s project because he knew that in order to convince the college of the need for a new water system, he would need to show them that they had enough money to do it.

“We talked a lot about when you’re trying to fight for whatever cause you’re in, you need to be able to learn fast and become an expert in that field quickly enough to make a convincing argument,” Trellawny-Cassidy said. “It takes a while to learn that skill.”

Other projects from the water seminar included Adam Abraham’s investigation of the conflicts the scarcity of water has created around the globe over the past decade. Since 2000, according to the United Nations, 20 percent of the world’s population in 30 countries faced water shortages, which has led to 60 wars/conflicts, especially around the Tigris, Euphrates and Nile rivers. Over the past 50 years the world has tripled its consumption of water, which is a finite resource, and Abraham concludes that in order to survive as a global community, nations will have to collaborate to manage water better and/or improve the technologies to treat water.

One group researched the potential for adopting composting toilets on campus, including a flush count for Birch Hall which found that the 35 students who live there account for 600 flushes per week. If even some of those toilets were exchanged for the Phoenix brand composter, the students calculated that a full campus of 1,000 students could reduce its yearly consumption of 2.5 million gallons of water.