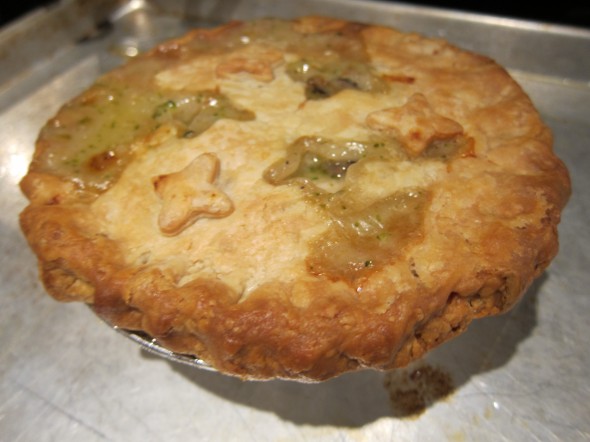 BLOG-Chef to the Homesick Traveler 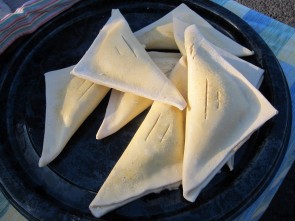 In the first week of December, I was listening to WYSO and the Splendid Table, a radio program on the joys of food. The host was discussing a couple’s recent trip to Fall River, MA where the travelers had encountered a rare treat: meat pies. Their meal was described as a savory pastry made with a lard crust and filled with meat, vegetables, and a light gravy. A lard crust? If you find yourself wondering if a lard crust could possibly be worth the trouble, I have found the answer locally…

For me, Saturday mornings mean farmers market and between October and December in Kings Yard—the space where the market assembles in the late spring, summer, and early fall—you can find a few vendors and their customers exchanging orders. I had come to pick up milk and found myself waiting in line next to a man with a wonderful English accent. He was telling stories of his time in Cornwall, England and, in particular, of the meat pasty for which the area is famous. He was there to pick up an order of locally made pasties and, as he collected his treasure, I was struck by how appropriately Chrissy Cruz had named her business in baked goods: the Home Sick Chef. On the strong recommendation of the man from Cornwall, I ordered two sampler pies: one chicken and one beef.

I’ve known Cruz for over a year now. She is a regular vendor at the Yellow Springs Winter Farmers Market which I help run on Saturdays in the months of January, February, and March. She helped bring live music to last year’s market, and her pumpkin bread is my children’s favorite snack. In 2011, she experimented with new recipes and hit on an absolute winner with her puff pastry. The dough for the meat pies is part lard and part butter, and it is just amazing…that super tasty, flaky crust that perhaps your fabled grandmother made but still eludes you. Cruz also achieves a light gravy that complements the fresh quality ingredients which she gathers from local sources. She will happily volunteer these sources for you, something that I greatly appreciate both at point of purchase and at meal time.

Since our first satisfying pies from the Home Sick Chef, we have picked up several meat pasties and a star-covered chicken pie for Christmas Eve dinner. We popped the full sized pie in a 400 degree oven for one hour—as we dressed for mass and wrapped the last presents—for a super easy, super good, surprisingly well-rounded meal.

To buy her pies, contact Chrissy Cruz at homesickchef@gmail.com or 937-270-4722. Also, you can find her Saturdays 9am to noon at the Yellow Springs Winter Farmers Market held in the United Methodist Church, 202 S. Winter Street. The winter market opens for the season this Saturday, 7 January 2012. We would love to see you there.