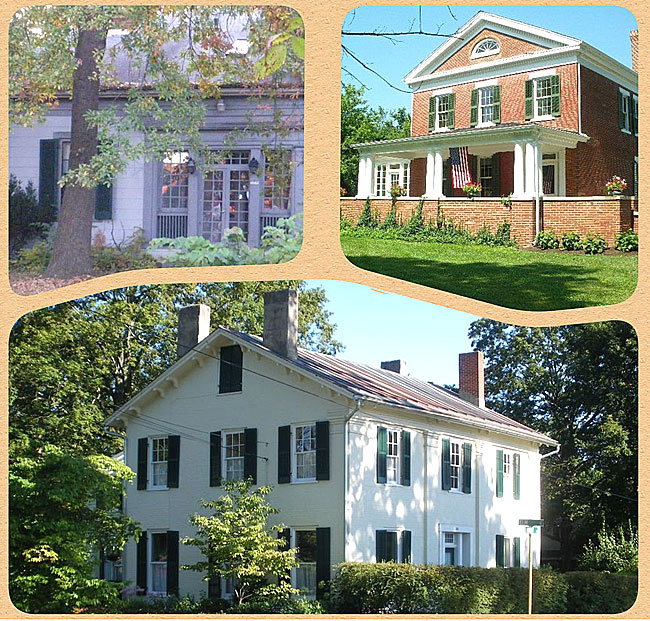 Historic buildings covered by Robin Heise in her talk this Sunday at 2 p.m. at the Senior Center will include the Barr property, top left, the Carr House, top right, and the Mucher home on Walnut Street.

Robin Heise, a graduate student in public history at Wright State University, will talk about her research on local historical buildings at a free public event this Sunday, Jan. 29, at 2 p.m. in the Senior Center Great Room. Light refreshments will be served.

While Heise originally started out doing research on properties, she soon became captivated with the stories of the early settlers who lived in the buildings, she said in an interview on Thursday. For instance, what’s known to many locals as the Carr House (top right, on the corner of Xenia Avenue and Herman Street) was built about 1854 by John W. Hamilton, who was one of two brickmakers who settled in Yellow Springs. Hamilton, who was believed to have made most of the bricks used in the village’s historic buildings, also served as justice of the peace, and as such was one of the original signers of the Antioch College articles of incorporation.

“A lot of the early property owners have been forgotten,” Heise said. “There really were some interesting folks.”

Heise has researched about 12 historic local buildings, and her talk will cover 10 of them, including the buildings shown above: the Carr House, the Barr property (top left) and the historic home on Walnut and Elm owned by Chris and Cindy Mucher, also known as the Cox house.

One Response to “Yellow Springs history in spotlight”