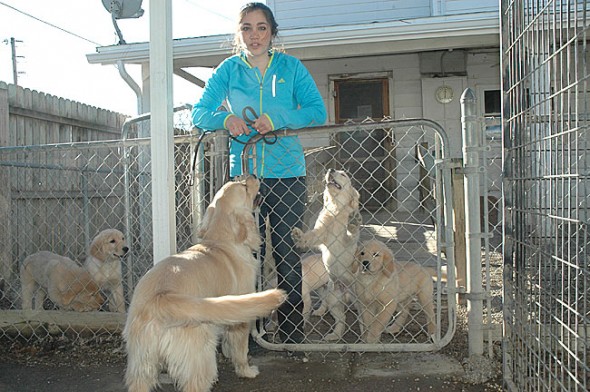 Israeli resident Yarden Oron came to the village last month to learn how to train the seizure alert dogs that help especially kids with epilepsy. She now works with Veera, above, at 4 Paws for Ability in Xenia, and regularly visits the golden retriever puppies who are raised there as future service dogs. (Photo by Lauren Heaton)

Here to help dogs do good

Veera, a 10-month-old golden retriever in training at 4 Paws for Ability in Xenia, is a very smart dog. Thanks to her handler, Yarden Oron, who came from Israel to learn how to train her, the dog knows how to sit, heel, stay, open doors, turn on lights and comfort someone in distress. She will need these skills when she graduates and gets placed as a service dog to help someone living with epilepsy.

Oron didn’t know Veera when she came to the US three months ago to work at 4 Paws, one of the few service dog training centers in the country that works with seizure alert dogs. She had sought a training center in the US because there were none with that focus in Israel. The story of 4 Paws founder Karen Shirk’s recovery from a life-threatening illness with the help of her first service dog touched Oron, and she immediately began looking for a Jewish community in the area to host her. Her aunt had attended nearby Antioch College, and a few online clicks from there she found the Yellow Springs Havurah, and is now living with the family of Jay and Randi Rothman, members of the local Havurah.

Since they started working together about a month ago, Oron and Veera have become very attached. In fact, Veera’s main fault is that she pines so deeply for the next instruction from Oron that she ends up unintentionally disobeying her handler. It will be hard to part with Veera when she is adopted by a family, Oron said, but the loss will be worth the joy she feels knowing that Veera will improve the life of someone who, like her, has epilepsy.

Oron grew up in Tel Aviv with a mild form of epilepsy known as childhood absence. The condition brought on periodic episodes of lost consciousness caused by non-convulsive disruptions in the electrical activity of the brain. The seizures did not hurt her, but they made her feel self-conscious and different from others. Then at some point during her ninth-grade year, perhaps after learning that many “historic geniuses” such as Van Gogh, Leonardo Da Vinci, and Charles Dickens had epilepsy, she said, “I got my confidence and became more open about epilepsy.”

Thinking “I too might be a genius!” she got connected with EYAL, the Israel Epilepsy Association, and spoke about her experience on a children’s television program. Then other stations called and invited her as a guest on their morning talk shows. She connected with families with children with epilepsy, wanting to help them talk about an issue that she herself remembered feeling ashamed about earlier in her life.

It felt important to Oron to educate the public about epilepsy and about how to help someone having a seizure, she said. For instance, for a grand mal seizure with major convulsions, it is proper to clear away any obstructions and roll the person on his or her side to prevent choking. Do not put objects in the person’s mouth or try to manipulate the over-tensed muscles. Instead, give the person space to complete the course of the seizure, which can sometimes last several minutes, and attend to him or her afterward.

After graduating high school in 2007, Oron participated in a year-long leadership training program and then served two years of mandatory military service. Then while traveling in Africa last year, she had a dream that she became a service dog trainer for people with disabilities.

“I called my mom right away and told her about the dream, and one week later I flew back to Israel to look for a training center,” she said.

Oron studied basic dog training for eight months in Israel before coming to the States, and after a few weeks of observation at Paws, began working with Veera. Some dogs, like Veera, are born with the ability to sense what specialists believe is a chemical change in a person who is about to have a seizure. The dogs are tested for their abilities at several months of age and then trained to bark, paw or whine to warn the handler several minutes or hours before an attack to allow the person to take medication or get to a safe place and call for assistance.

Since Paws trains many dogs for children with disabilities, Oron teaches Veera to bark when she sees convulsive movements to alert the parents that their child may be having a seizure. She also teaches her to lie down in different positions to comfort a child after a seizure. And what is most reassuring about Veera’s capability as a service dog is her obvious display of happiness and satisfaction after performing a command correctly.

“Look, she is wagging her tail and looking always at me — she is happy, she wants to work,” Oron said.

Oron is currently applying to college in the US and thinks she would like to pursue service dog training as a career. She recalled how she felt when one of the Paws dogs was placed with a family whose child was deaf. She saw the trainer explain to the mother that she could now call to her child, who, through the dog’s pawing, would know that his mother was talking to him.

Giving someone previously so isolated a new way of connecting to the world through a soft, furry friend convinces Oron that she is on the right path. She remembers what it was like to feel different, and her message is that everyone has strengths and weaknesses, and having a formal “disability” shouldn’t stop anyone from living life and trying new things.

“Having epilepsy doesn’t stop you from living a normal life,” she said. “Do everything every other person would do. Don’t think you’re different because of that.”