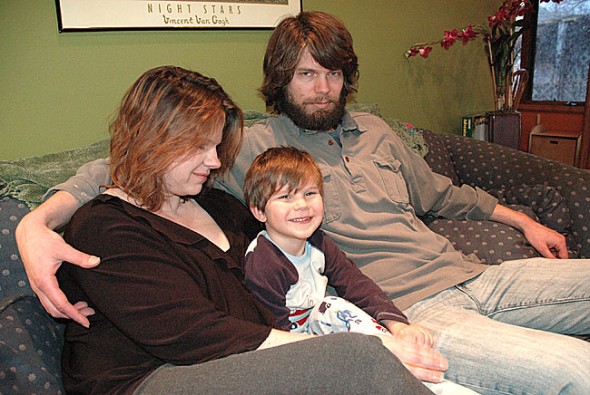 New Yellow Springs residents Kelly and Jaye Drummond lost their daughter, Lauren, 5, last summer in a car accident outside of Springfield. The driver, who is being charged with vehicular homicide, appeared to be talking on a cell phone and speeding at the time of the accident. The Drummonds, pictured at their King Street home with their son, Matthew, 3, are beginning a campaign to lobby local and state officials to ban drivers from talking on cell phones or texting. (photo by Diane Chiddister)

Life changed swiftly, horribly and irrevocably for the Drummond family on a hot sunny August day last year. Jaye and Kelly Drummond had taken their two children, Lauren, 5, and Matthew, 3, for a picnic at the George Rogers Clark Park west of Springfield, where they lived at the time. They decided to drive back to the city on U.S. 40 and had slowed, then stopped, for a deer crossing the road; in the lane on the opposite side of the road, a car coming toward them did the same. When the deer vanished, the two cars began moving slowly on their way. Suddenly, the Drummonds felt an enormous impact as their car was hit from behind and launched down the road. When the car came to rest, Jaye, Kelly and Matthew had suffered non life-threatening injuries, but Lauren, who had been secured in a child safety seat, was critically injured. She was careflighted to a local hospital, where she died later that night.

In November, the family moved to Yellow Springs, where they now live on King Street. Jaye and Kelly help each other get through the day, but they are stunned and heartbroken.

“It’s so sudden,” Jaye said in a recent interview. “You’re out with the kids on a family excursion and suddenly, because a driver isn’t paying attention, your child dies. It’s a nightmare, and we have to learn the horrifying truth again every day.”

Jaye and Kelly have, besides their son, one reason to keep moving forward. They hope to change local and state laws so that other families don’t suffer the same tragedy. Specially, they want to raise awareness about the need for laws banning the use of cell phones while driving.

“I’ll dedicate as much of my life as I can bringing attention to this problem, with the hopes of eradicating it,” Jaye said.

The driver of the car that hit the family in August, a 22-year-old woman, is believed to have been on a cell phone, as well as exceeding the speed limit, at the time of the accident. And it’s likely that she was, the Drummonds believe, as she hit them with extreme force and did not appear to have put on her brakes, according to state highway patrol officers at the scene. Springfield prosecutors are pursuing a criminal case against the driver, with a charge of vehicular manslaughter and vehicular homicide.

While the Drummonds are gratified that this one driver, at least, may be brought to justice, that action doesn’t change the larger problem, which is that countless people are driving while talking on cell phones or texting.

“I see people going up and down our street talking on their phones all the time,” Kelly Drummond, a nurse practitioner, said.

There is growing awareness in the country about the dangers of texting while driving, and most states — although not Ohio — have laws banning this activity. But there’s far less awareness about the dangers of driving while talking on the cell phone. While some states have passed laws banning the use of handheld cell phones while driving, those laws give the mistaken impression that it’s safe to drive while using hands-free devices. According to a 2010 report by the National Safety Council, or NSC, it is not.

“Cell phone driving has become a serious public health threat,” the report states, estimating that more than one in four motor vehicle accidents involve cell phone use. The National Highway Traffic Safety Administration estimates that at any given time about 11 percent of all drivers are using cell phones, according to the report.

Motor vehicle crashes are the leading cause of death for 3-to-34-year-olds in this country, and one of three top causes of death throughout a person’s lifetime, the report states. In the past 15 years, more than 650,000 Americans lost their lives in car accidents. The NSC report estimates that 25 percent of all crashes in 2008 involved cell phone use. Using this figure, the death rate linked to cellphone use while driving would be equivalent to the lives lost if one jet with 90 passengers crashed approximately every three days per year during that time.

And many more Americans suffer injuries. In 2008 alone, 2.2 million Americans were injured in car accidents.

“To reduce this toll, prevention must focus on the top factors associated with crashes,” the report states, identifying cell phone use along with alcohol and speeding as the leading factors. Some risk factors involved in using cell phones while driving are obvious, such as attention taken away from the road while dialing. But other risk factors are not. According to the NSC report, response times by cell phone users are slowed because people are not actually capable of “multi-tasking,” doing two things, such as talking and driving, at once. Rather, our human brains handle tasks sequentially, switching from one to another. This switching involves a series of steps that ultimately can lead to an overload of information, so that some information is shut out. One effect of this switching is slower response times, and another is the brain ignoring some visual information. Consequently, when on the cell phone even those drivers looking straight out the window are not seeing all the visual information that non-cell phone users see, because their brains simply can’t process it.

“Drivers talking on hands-free cell phones are more likely to not see both high and low relevant objects, showing a lack of ability to allocate attention to the most important information,” the study reads. “They miss visual cues critical to safety and navigation. They tend to miss exits, go through red lights and stop signs and miss important navigational signage.”

The NSC study, a compilation of 30 studies across cultures that examine the effects of driving while talking on a cell phone, comes to the conclusion that “the risk of crashing when engaged in a hands-free phone conversation is about four times greater than when not using a phone while driving.”

Ohio remains one of 10 states with no ban on texting while driving, and one of 13 states with no laws banning cell phone use. Last June the Ohio House passed a law banning texting while driving, which has since gone to the Senate Highways and Transportation Committee, which heard testimony on the bill in November, without taking action. However, a similar bill died in the Senate a year ago.

While the state so far has taken no action on distracted driving laws, some Ohio municipalities have. In December, the city of Kettering banned text messaging while driving, as have Toledo, Columbus, Zanesville and Delaware, among others.

The Drummonds hope to start their campaign to make driving safer in Yellow Springs.

“Why wait for the state to take action? Kelly Drummond said. “We think Yellow Springs is forward-thinking enough.”

Making clear the risks of driving while distracted by cell phone use and texting is especially important now, since those activities are so much a part of life for countless young people, making it likely that more and more people will drive distracted as those young people age, Jaye Drummond said. It’s critical that young and old alike become more aware of the dangers of driving while distracted, and local and state bans are a significant way to do so.

“We need the laws to express community disapproval,” he said.

Nothing can bring back Lauren Drummond, who her parents describe as a “magical spirit” who loved dancing and singing, and on the day she died was thrilled to be starting Mills Lawn School in 11 days. But with the “Lauren’s Law” they hope to bring about in Yellow Springs, and ultimately in Ohio, they hope to help others avoid their devastating loss.

To all drivers, Jaye Drummond says, “Please pay attention to the road at all times. Consider the lives of others, if not your own.”