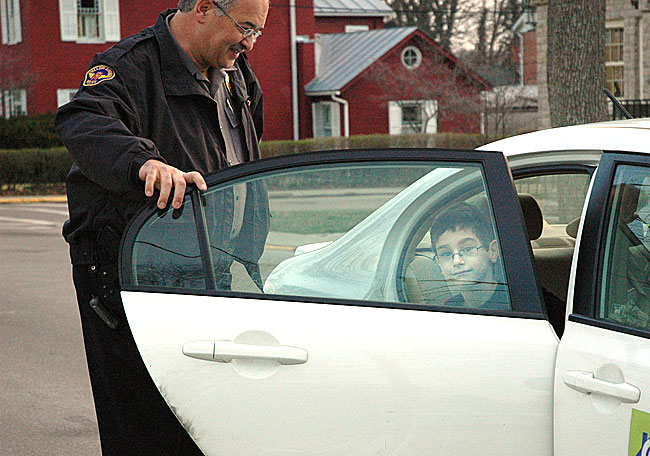 Yellow Springs Police Chief John Grote is retiring at the end of this month after 25 years with the department. He’s shown here at his daily morning duty helping Mills Lawn School kids get out of cars and into the school safely. A reception for Chief Grote, plus two other Village retirees, will take place Thursday, March 29, at 11:30 a.m. in rooms A and B at the Bryan Center.

Closing one door—Bittersweet goodbyes for the chief

Yellow Springs Police Chief John Grote likes to tell the story of a recent visit with his 6-year-old son to an area pediatrician. The doctor suddenly looked up at Grote, who was in uniform, and said, “I know you. You used to bring doughnuts when I was on safety patrol.” (The doctor was Patricia Fine, who grew up in the village and went to Mills Lawn School.)

Honoring kids who are trying to help others cross the street safely is one of the parts of his job Grote loves. It’s a small thing, but something that helps build community, he believes. And the community-building aspect of local policing is what he’ll miss most when he retires at the end of this month.

“This is bittersweet,” Grote, 54, said in a recent interview. “There’s parts of the job I absolutely love, and parts that are difficult and I don’t like much.”

At the end of last week, Grote was dealing with one of his least favorite parts. Local police had the day before apprehended three Springfield people who allegedly robbed Wesbanco, and he was wrapping up the case. Some police chiefs might have found it gratifying to bring three criminals to justice, but Grote is not that sort of chief.

“I’ve never had the feeling of wanting the macho cop image. That was never me, and it’s less and less me over time.” he said.

But apprehending criminals ­was never the most important part of his job. Mainly, Grote has been part of, and then overseen, a department that administers justice with a gentle hand, in the style developed by longtime Police Chief Jim McKee, who initially hired Grote in 1984.
“I like the way that Yellow Springs police apply the law,” he said. “As I learned from Chief McKee, arrest is often the last resort. I couldn’t have worked in a better place.”

After 25 years on the local force, Grote’s last day on the job will be Friday, March 30. While his decision was mainly sparked by health concerns — he’s diabetic and has had two heart attacks in recent years — he also feels he has run his course as the Yellow Springs chief.

“Good things have happened, and I know there’s things I could have done better,” he said. “It’s time to move on and let someone else do those things I couldn’t do.”

A reluctant cop
John Grote always was a reluctant police officer, beginning when he was asked by former Chief McKee to apply for a job in 1984, when Grote was just out of college. Having grown up in Yellow Springs, Grote had graduated with a degree in biology from the University of Cincinnati. As a young man he also worked for the local fire department as a paramedic and fire crew member, and he’d become increasingly interested in getting a job at the fire department.
But then McKee called, offering a job in the Yellow Springs police department instead. Grote took the required tests, did well, and ended up taking the position. He stayed on the job until he and his wife, Liz Blakelock, a veterinarian, moved to Pennsylvania in 1987 when she got a job there, but they returned to the area when the couple decided to start a family. And once again Chief McKee called, asking Grote to come back to the force.

He learned everything important about policing from McKee, Grote said. For instance, the former chief treated everyone with respect, even those who had broken the law.

“He always said, ‘I will treat you with as much respect as you let me’,” Grote said.

McKee saw helping the community as an important part of his work, and he and the late Mary Ann Bebko started the police department’s Coat Fund in the early 1990s when they noticed that some local children didn’t have warm coats in the winter. That fund (with donations of about $15,000 last year) has grown to include not only the purchase of coats, but paying utility bills for villagers who fall behind (last year the fund paid $8,000 in delinquent bills) buying groceries and medications for those out of funds, and purchasing Christmas gifts for the children of cash-strapped families. And when providing gifts, McKee preferred to give the money to the parents to purchase the gifts, so that the kids could look up to their mom and dad, rather than to the police department.

“I learned from him that it wasn’t just a matter of doing it, but how you do it,” Grote said.

Overall, Grote said of the Coat Fund, “That’s not law enforcement but it was Jim and Mary Ann’s vision of taking care of the community. I don’t know any other police department that does things like that.”
The Coat Fund also cemented Grote’s view of Yellow Springs as a community-minded town.

“It’s been amazing to me how generous people are,” he said. “People of even meager means will still write that check.”

In the late 1990s, the concept of “community policing” became trendy in police circles, as more departments embraced a broader vision of their job that included doing good works as well as arresting criminals. The concept was new to many municipalities, but not to Yellow Springs.

“It was strange to me to hear about this as a new thing, because we’d been doing it all along,” Grote said.

Grote, who by then had earned a graduate degree in police administration from Northwestern University, was encouraged to take over the chief’s position when McKee retired in the mid 1990s. However, he resisted the push, feeling that his talents lay in being a support to the new chief, and as such he served as captain from 1998 to 2005 during the tenures of Wiley Simpson, Jim Miller and Carl Bush. After the Village had hired and lost (or fired) three chiefs during that time, Grote in 2005 agreed to be a candidate for the position. He has held it since then.

Grote is quick to acknowledge his shortcomings, and he believes that his management style, which he describes as hands-off, hasn’t always been effective. Some personnel problems over the years have been very difficult, he said, and he hates firing people. He also felt that his community-minded police style was sometimes at odds with that of some of his officers, who seemed to have more of a “numbers game” (striving to make the most arrests) approach to the job.

“That aspect of policing turned me off, and I saw it quite a few times,” he said.

But overall, he believes the local police department has been largely successful in carrying on Chief McKee’s vision. In recent years, he said, he’s tended to hire officers who are a bit older than young rookies, since those added years tend to bring added maturity to the job. He works at encouraging his officers to see events from others’ point of view. And he also believes the local department has served as a model of a more humane approach to police work for some other area departments.

“I think we have changed the culture a bit,” he said.

For whatever reason, the local police department is never at a shortage of those who want to work here, and there’s a stack of résumés now in the chief’s desk drawer.

“We get a lot of people seeking employment,” he said. “People know we do things differently here.”

The hardest part
Ask Chief Grote what was the hardest part of his tenure, and he doesn’t hesitate: it was the disappearance of local youth Tim Lopez, and the resulting discovery that Lopez had been killed by another local young man in drug-related violence.

“That opened our eyes to some serious issues in Yellow Springs,” Grote said.

Lopez, a senior at Yellow Springs High School, disappeared in the fall of 2002. While rumors swirled of Lopez being a low-level drug dealer, police couldn’t nail down evidence nor find his whereabouts. Finally, two years later, his body was found in the backyard of another former YSHS student, Michael Rittenhouse, who was in 2005 found guilty of killing Lopez and is currently serving a sentence of 15 years to life at the Lebanon Correctional Institution.

The two years during which Lopez was missing were a period of anxiety for the village, Grote said, with the police flooded with calls urging them to solve the case. During that time police interviewed about 20 young people, and the youth culture that emerged from those interviews was disturbing.

“There was a lot of drug use going on among young adults and teens,” he said. “It opened up a problem that the village was facing at the time.”

A tip following the Columbus arrest of Iddi Bakari, also a former YSHS graduate who was charged with operating a drug ring from that city, led police to Lopez’s body.

Grote was deeply affected by the tragedy, he said, and the department began focusing on cracking down on young people who sold drugs to each other, as well as others who sold drugs to youth. A new emphasis on drug interdiction, during which local police, given probable cause, searched for drugs during traffic stops, netted new information and arrests.

“We started to learn more about how drugs made it to Yellow Springs,” Grote said.

Several years later, Grote believes that the policy had an effect. The information police found led to drug busts at two area meth labs, according to Grote. It’s harder now to get hard drugs, such as heroin, in the village, he said. Still, he hopes the village remains vigilant.
“We know it still happens,” he said. “We know there’s a fair amount of marijuana use. We’re still concerned.”

His concerns also include young people experimenting with pharmaceutical drugs, as well as alcohol use, Grote said. In general, he hopes that drug use is down somewhat in the village but believes that, in general, “I don’t know if you make a dent. It’s like a wave, up and down. You do what you can.”

Grote’s lifelong association with Yellow Springs has been particularly useful in working with young people, since he graduated high school with former longtime YSHS principal John Gudgel, and the two are good friends. When young people got into trouble, the two men met to consider the best way to try to turn things around, and Grote was happy to let the school take the lead.

“We often collaborated to see who could do the best for the kid at the time,” Grote said. “Most of the time, it was the school.”

All in all, he said, he followed this approach due to his deep trust in Gudgel.

“I respect John more than he knows,” Grote said.

In general, Grote has not seen huge changes in the village over the years. He believes it’s still the special place he grew up in, and that it’s still a nurturing community.

He hopes that his successor continues to adhere to the style of community-based policing that Chief McKee developed in Yellow Springs.

“I want to see someone in the job who understands the culture and the nature of law enforcement here,” he said. “I do believe it’s different.”