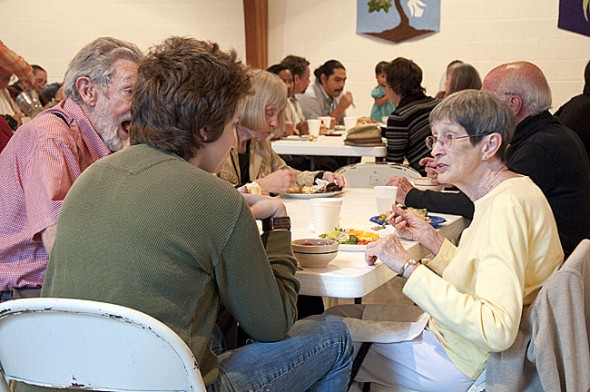 Ruth Bent and Al Denman want to keep the local potluck tradition going by throwing community feasts on March 14, April 11 and May 9, from 6 to 8 p.m. at the First Presbyterian Church’s Westminster Hall, 314 Xenia Avenue. All villagers are invited and should bring a dish to share and their own service. Here Antioch College students dine with villagers Tony Bent and Bev Price at weekly potlucks held last fall. (Submitted photo by Dennie Eagleson)

Of sharing food and company

While too many a potluck means a church meal with creamy casseroles and jello molds, the rich potluck tradition in Yellow Springs is decidedly non-traditional. Instead of the typical American fare, international recipes abound, vegetarian dishes are prolific, locally-grown foods are featured and the conversation is just as tasty as the cuisine.

At three upcoming potlucks, starting next week, villagers can share their cooking and enjoy the “luck of the pot.” The food fests will be on the second Wednesday of the month, on March 14, April 11 and May 9, from 6 to 8 p.m. at the First Presbyterian Church’s Westminster Hall, 314 Xenia Avenue.

Longtime villagers Ruth Bent and Al Denman are behind the community potlucks, which are simply about food and fun. There are no expectations, no cost and no invitation necessary.

“It’s an occasion where lots of people come together with no other purpose than to be together and eat, “ said Bent, who’s lived in town for 60 years. “You don’t have to be invited or to wait for someone to call you up for dinner — just come!”

Denman said he’s been to upwards of 1,000 potlucks in his 84 years, 47 of which he’s spent in Yellow Springs, and that he’s never left hungry, or had indigestion.

“One of the almost miraculous things about potlucks is there’s always enough food and a good balance,” said Denman, known for bringing fresh fruit salads.

Denman and Bent were inspired by the “town-gown” potlucks held weekly last fall to welcome, and to feed, the new Antioch College students, who were without an on-campus kitchen for nearly two months. Around 100 people from the college and community  showed up to each meal. And annually, the Thanksgiving potluck and summer neighborhood potlucks draw many villagers together to feast.

“Yellow Springs is a real place, not a suburb full of houses,” Bent said. “Part of the feeling you get is we all belong to something we all value.”

Denman looks forward to potlucks for the “mystery” of not knowing what he’ll eat and the conversations with old friends and new acquaintances.

“We share our food, but we share a bit of ourselves as well,” Denman said. “The food is only a part of it. The joy of eating it is great, but there’s the joy of meeting new people and visiting over a meal that none of us planned on.”

Potluckers should bring a main dish, salad or dessert to share and their own plates and utensils. The First Presbyterian Church will provide coffee, ice water and hot water for tea. And with Denman’s commitment to washing onsite any dishes that villagers forget to bring, no disposables will be used at the event.

Though potlucks of as little as a dozen people can be disappointing for the discriminating palate, the much larger numbers that the community potlucks attract means the variety and quantity of food is never a problem, Denman said. If past potlucks are an indication, diners can expect meatloaf, baked ham, beans, pasta, rice and vegetable dishes, baked bread, cookies and more.

“There’s always plenty to eat and something for everybody,” Bent said, adding, “even for picky kids.”

If successful, more community potlucks may be organized in the fall, Bent said