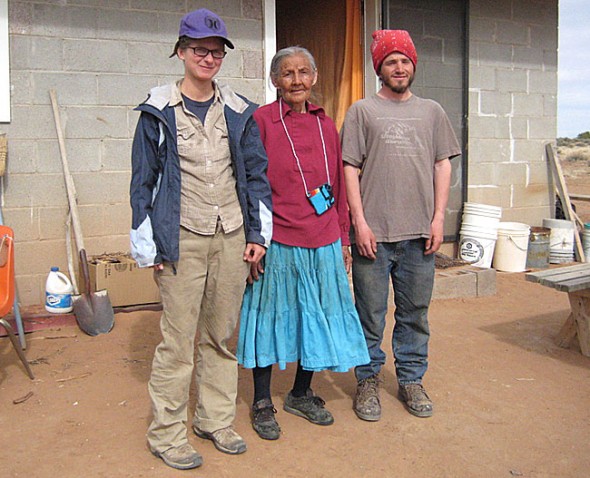 Standing up for a threatened people

Far from the fertile green fields of Yellow Springs, in the arid high desert of the four corners region of Arizona, live the scattered families of the Navajo, or Diné, tribe. They have, for decades, resisted federal government attempts to remove them from their ancestral land, and have done so with the help of some steadfast Yellow Springs residents who live without electricity, herd sheep and carry water for Diné elders during cold, windy winters.

The work of those local residents is more than an act of solidarity for an oppressed minority struggling to keep alive its traditional ways. In the formidable country of Black Mesa, Arizona, in the midst of dire poverty, are a people taking a stand against the encroachment of the industrial world on an indigenous culture. And that is worth fighting for, they said.

One local supporter, Jenny Johnson, will speak about her personal experience on the reservation at an educational event, film screening and fundraiser for the Diné resistance from 6 to 9 p.m. Saturday, March 10, at the Yellow Springs Senior Center, 227 Xenia Avenue. A vegetarian dinner will be provided with a suggested $5 to $10 donation. “Broken Rainbow,” a 1984 Academy Award winner for best documentary, will be screened.

“It’s a genocidal policy,” Johnson said of the 1974 federal resettlement act, which mandated that 14,000 Diné move from their land to border towns hundreds of miles away. The Diné land would then be granted to the neighboring Hopi tribe, whom Johnson said would in turn lease its vast mineral resources — including coal, uranium and natural gas — to energy companies like Peabody Coal.

“It’s ripping people’s culture away from them,” Johnson continued. “The land is central to their cultural identity and to their existence and to move off their land is like losing their soul.”

Clinton and Whitesinger, in their 80s or 90s, are part of a small and dwindling number of Diné living in defiance of the federal relocation policy, amidst threats and harassment. Many are poor and elderly. The struggle to survive alone in the desert is especially daunting over winter, which is when Johnson, Stockwell and Snider come to help.

“As long as Grandma Ida is there, they’re not mining coal,” said Snider, who has spent the last five winters with her. Snider, who is 71, is inspired that an 85-year-old woman has stood up to the U.S. government for 38 years. Clinton is the only Diné left on Star Mountain and has at times resorted to hand-to-hand combat to protect her land from Hopi fence-builders.

A few hundred miles to the north, on Big Mountain, is Whitesinger, who doesn’t speak English — she only speaks the native Diné Bizaad language — and lives without electricity. Recently, four of her cows were confiscated by Hopi rangers and had to be repurchased for $420, a large sum for a subsistence farmer.

Sheep are central to the Diné, who eat the meat and weave rugs from the wool, so volunteers spend much of their time walking for miles taking the sheep out to pasture and distant watering holes. The work is tough. Snider walks 5 to 12 miles a day with the sheep in hilly terrain in rapidly-changing weather conditions. And he must fetch all the water for cooking, cleaning and bathing from miles away. But “it’s good work,” and is the least he can do considering the way that Native Americans have been treated, Snider said.

Johnson, 23, has faced 50-mile per hour winds and snowstorms at high altitude (over 6,500 feet), and strained her body felling trees and chopping wood.

Because of the strenuous work, herbalists, bodyworkers and massage therapists are needed on the reservation. Johnson hopes local healers step up to donate their time or supplies. She is also looking for donations of cash or food iteams. Without refrigeration, volunteers need to bring food like bulk beans, rice, nuts, eggs, oil, honey and winter crops like potatoes, onion, carrots, squash and apples.

Though life is difficult for the remaining Diné, the alternative may be worse, Johnson said. If they are relocated, they are given $5,000 and a house. But the house requires constant utility payments and the Diné must get jobs. Worse yet, in the words of Johnson, “They are uprooted and expected to survive in a white man’s culture,” and must give up their traditional way of life, she said.

Plus if the Diné leave the land, it will likely be mined for coal and other resources, Johnson said, which would wreak havoc on the land, water and air.

The resistance will not go on forever. Clinton and Whitesinger are getting older and the energy-industrial complex marches ever closer to native lands. But the act of standing up for the Diné resonates still.

“For Grandma Ida to hang on to what’s decent in spite of the government is awesome,” Snider said. “Anywhere I can support that resistance to the competitive, greedy system that’s around us, I will.”

Those who cannot attend the fundraiser but would like to join the caravan, donate supplies or in any other way help, can contact Johnson at willtheway00@yahoo.com .