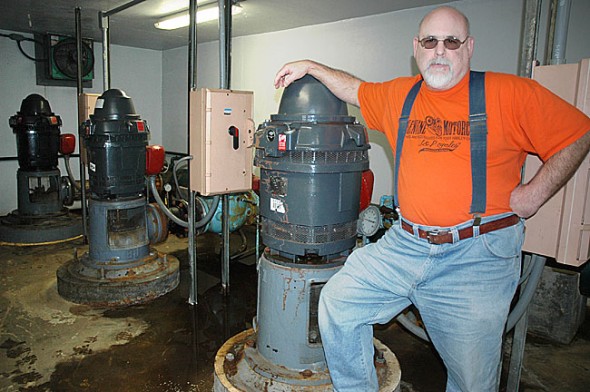 Ted Dunevant, operator of the Yellow Springs water plant for the past 26 years, is retiring at the end of this month. He’s shown in the water plant’s pump house, the last stop for local water before it’s pumped into the village. (Photo by Diane Chiddister)

Village water, from the ground up

LIQUID ASSETS
This is the second in a series of articles examining issues regarding local water.
• Click here to view all the articles the series

You could say the Yellow Springs water system began about 425 million years ago, when a large inland sea covered the area. Over eons, the sea deposited thick layers of mud and shells from marine life. Those layers gradually solidified into bedrock formations which, much later, were covered with loose layers of gravel and sand beneath ice as a glacier further north began edging southward.

Beginning about 30,000 years ago, the glacier spread a thin sheet of ice over much of what is now Ohio, its southernmost point located near what is now Lebanon, according to retired Antioch College geology professor Peter Townsend. Glacial activity in this area continued over thousands of years, as the ice layer receded to the north, then crept south again.

The area that’s now the North Glen experienced significant glacial run-off during this back and forth glacial movement, and that rushing water eroded the thick layer of loose sediment to expose the bedrock beneath. Visitors to the Glen in 2012 can see that bedrock, which starts at the top with visible Cedarville and Springfield layers of rock, with the Euphemia, Massie, Laurel, Osgood and Brassfield layers beneath.

In the south Glen, south of Grinnell Road, this back and forth glacial movement did not cut so deeply, consequently leaving in place the layer of loose sediment, a combination of glacial till, sand and gravel. That gravel is what now provides Yellow Springs with its abundant supply of water, according to Townsend.

The Village pumps its water from a layer of gravel about 120 feet underground, as four wells continually extract groundwater that has found a way into the gravel’s porous openings.

“Water invades any openings available,” Townsend said. “It will displace the air in any place that has holes.”

The four wells — visible above ground are green U-shaped pipes standing about 10 feet high, some surrounded by a cement block enclosure — comprise the Village well field at the end of Jacoby Road south of town, near the Little Miami River. The wells are constructed of steel casing, and at the bottom of each about 20 feet of layered screens help to filter dirt and debris from the water as it’s pumped up to the surface.

Water that flows through the local system is initially groundwater, mainly recharged by rain that percolates down through the ground, according to Heather Lauer, spokesperson for the Ohio EPA. While some of the water may have originally flowed into the ground from the Little Miami or Yellow Springs Creek further upstream, by the time it reaches the Village well field, it has taken on the characteristics of groundwater rather than surface water, she said. The Village tests the water twice a year for signs of the organic decomposition that is found in the surface water of rivers, and has not found any in Village water, according to Village Water and Wastewater Treatment Superintendent Joe Bates.

The Village well field area is part of a larger aquifer, which is a geological formation capable of receiving and storing water, that begins just south of Grinnell Road, near that road’s intersection with the Little Miami River, and extends further south into Xenia Township. It is described as a buried valley aquifer due to its layers of loose sediment, and is also identified as an unconfined aquifer, meaning that it lacks a natural barrier between the ground surface and aquifer, according to a 2003 EPA report. Because of this lack, the loamy nature of the soil and potential sources of contamination that could reach the Village water supply within five years, the aquifer is considered to be at high risk for contamination from outside sources, according to a 2003 EPA Susceptibility Report.

The Village pumps about 400,000 gallons of water a day out of the well field, similar to the amount that villagers use daily during most of the year, although use goes up to about 500,000 gallons a day over the summer, according to Ted Dunevant, the operator of the Village water treatment plant.

For 26 years, Dunevant has been the man responsible for safe and abundant water flowing through village taps. But he won’t be there much longer, as he plans to retire the end of March.

“His efforts go unnoticed. People don’t know he’s behind the scenes, and whenever they turn on the faucet, he’s linked to it,” said Bates.

When Dunevant leaves, Brad Alt, current operator of the wastewater treatment plant who has recently earned his water treatment certification, will take over the water plant job, with a new person to be hired to run the wastewater plant, Bates said. In the future, he plans to have the two plant operators trade jobs regularly, so that both become familiar with the operations of each plant.

On a recent tour of the plant, Dunevant opened a door to reveal the water’s first stop at the plant, the aeration room. In this room water pours over a series of racks, becoming aerated as it flows over each level. The aerating process is the first of two steps aimed at eliminating iron from the water, with the air initially oxidizing a liquid form of iron and turning it into a soluble form that can be more easily removed, according to Dan Cloyd, the Ohio Environmental Protection Agency environmental specialist for the division of drinking and groundwater, who oversees the local water plant.

From the aeration room an underground pipe carries the water to the filtration room, where it flows through about five feet of sand. The sand filters most of the soluble form of iron from the water, according to Cloyd.

The water then flows through a pipe to the chloration building, where it is injected with chlorine, the only chemical the Village adds to the water since Council last year voted to discontinue adding fluoride. The addition of the disinfectant makes the water safe to drink by eliminating bacteria that cause water-borne diseases, Dunevant said.

Chlorine is used to disinfect water in about 99 percent of municipal water systems, according to Cloyd, who said that chlorine is “cheap and extremely effective” as a disinfectant.

The Village adds 1 part per million of chlorine to the water, according to Cloyd, who said that amount is “a minimal amount” and that 4 parts per million is considered the upper limit of added chlorine safe for drinking water.

From the chlorine building, the water flows to a holding tank that’s located beneath a large hill behind the plant, and from there it flows to the pump house, from where it is pumped to the approximately 1,600 water connections in the village.

On average, a cubic foot of water takes about an hour to move through the treatment plant, Dunevant said.

Built in 1962, the 50-year-old treatment plant “is like an old carburetor,” Dunevant said. “I can walk in this place and smell when there’s something wrong.”

Dunevant spends his working days keeping an eye on the water’s progress through the plant, and making sure that there’s an adequate level of water in the Village’s two water towers. It’s a job he performs alone, day in and day out, but he likes it that way, he said.

In his 26 years on the job, Dunevant, a former mechanic, has come up with some ideas on how to make things run better and enhance efficiency at the plant. For instance, he designed a battery-powered backup system that allows the plant to operate off the grid, so that Village water is not affected by electrical shortages. It would take a huge catastrophe, such as an earthquake, to disrupt the delivery of the Village’s water supply, Dunevant said, and he’s proud that “there’s never been a time on my watch that we didn’t have water.”

While the Village plant is undeniably old, it appears to be doing its job, according to Cloyd, who said, “We’re not seeing a lot of problems” with Village water.

“The water is in good shape,” he said.

In general, he said, the local water system’s quality can be linked to the system having groundwater as its main source, since “byproducts are mainly present in surface water,” and the Village system includes only an insignificant amount, if any, of surface water recharge.

The Yellow Springs water system’s problems involve “aesthetic concerns” that are caused by the presence of manganese, which can cause brown water and staining. But these are not health concerns, according to Cloyd.

“We get more complaints about aesthetics than about the things in water that people can’t see,” he said.