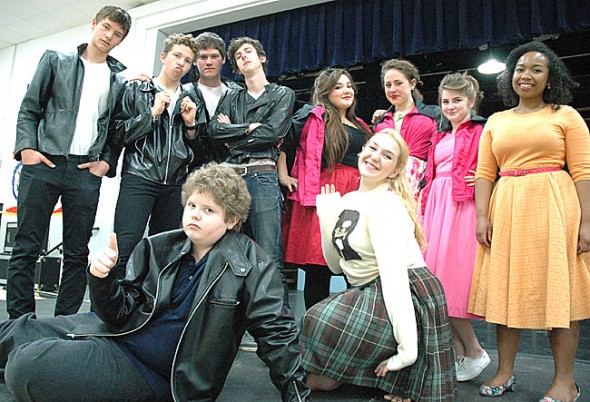 When Grease was announced as this year’s spring musical over the loudspeaker at Yellow Springs High School, students screamed. Auditions were packed with many who had never before acted. Boys came out for the show in droves. But it wasn’t until the 1950s-era costumes arrived on set — with the girls twirling in their swing dresses and the boys strutting in their leather jackets — that director Katie Mann knew the extent of their enthusiasm.

Musicals can be corny, but Grease is cool. And YSHS students are eager to play their rebellious teenage counterparts at the fictitious Rydell High School, to jive and swing in Grease’s lively dance numbers and to tackle tough issues like teen pregnancy, gang violence, love and heartbreak, cast members said.

“Everyone knows Grease, everyone loves the show and every guy wants to be John Travolta,” Mann said.

Grease opens Friday, April 13, with performances continuing on Saturday, April 14, and Sunday, April 15, and the next weekend — April 20, 21 and 22 — at the Mills Lawn Auditorium. Friday and Saturday performances will be at 8 p.m. and Sunday matinees at 2 p.m. Tickets are $10 for adults and $5 for students and seniors.

Set in 1959, the quintessential play about high school follows its characters at a pajama party, drive-in theater, school dance and burger palace. It opens with a new student, the naive Sandra D. (Zyna Bakari), recounting her brief summer love affair with the popular Danny Zuko (Benjamin Green), leader of the T-Bird gang. The dancing is athletic, with throws, lifts and flips. The songs are iconic, including “Summer Nights,” “Grease Lightning,” and “We Go Together.” And the themes are universal among teenagers, cast members said.

“He’s someone I can really relate to,” Rory Papania said of his character, Kenickie. Papania has enjoyed playing an “angsty teenager,” compared to other, more distant roles, such as a German-Irish spy that sends people to their death, he said. And of his leather jacket and jeans costume — “I could dress like this every day,” Papania said.

Cole Edwards came out for his first high school play this year and though the dancing has been difficult, he’s had an “awesome” experience, he said.

“I was an athlete and thought plays were not that cool,” Edward said. “But Grease is cool,” he said, and the T-Birds, of which his character Sonny is a member “were the swag masters back in the day.”

Talia Boutis, a member of the ensemble, has found the dancing so thrilling that she turned down a speaking role so she could dance and sing in the production. And Zyna Bakari has relished the challenging role of Sandra D., who she said is “annoyingly sweet,” “incredibly naïve,” and “totally unlike anyone I’ve ever known.”

“It was hard for me to be Sandy,” Bakari said. “I was like ‘why won’t she stand up for herself?’ In Yellow Springs we’re taught at a young age to speak for ourselves.”

Drama club leaders were initially nervous when they realized that they ordered the original, PG-13 version of the play instead of the edited high school version. In the edited, G-rated version the girls don’t smoke cigarettes or drink wine at the pajama party, many of the songs are edited for language and content and the plot line with Rizzo’s pregnancy is omitted.

“The issues that arise [in the PG-13 version] are important and they’re what we see all the time — I don’t know why we’d hide it or keep it away,” Bakari said, adding that Yellow Springs students can handle it because they are more mature than other high school students.

“They decided after a lot of discussion that because these are issues that teenagers deal with all of the time, they should go ahead and do it,” said Moira Laughlin, director of the Theatre Arts Association. To explore the tough themes more deeply, a “Talk Back” discussion between the audience and cast members will follow the show on Saturday, April 21.

In addition to the controversial topics it addresses, Grease has been a learning experience in other ways, Laughlin said.

“This is a really fun educational experience seeing how things were,” Laughlin said. “If they thought their parents or their grandparents were really nerdy or conservative, they are seeing how teenagers were not really any different than they are now.”

“Unfortunately the theater technicians never get as much recognition as the actors,” said technical director Ara Beal. “If you’re doing a good job, it should be the seamless part of the production that is not noticed.”

Directing her first show at YSHS, Mann said that she was impressed by the passionate actors who would only give their best and the support from the local community. Also working with Mann are Ali Thomas, who choreographed two of the dance numbers, and James Johnston, the music director.

“The support from the community has been overwhelming,” Mann said. “Most schools aren’t lucky to have the theater board they have in Yellow Springs.”

And in her final performance, Bakari expressed her gratitude for the theater programs at YSHS and Yellow Springs Kids Playhouse.

“Since 2000 theater has been the biggest, most influential part of my life, “ Bakari said. “Yellow Springs theater has given me a wonderful foundation forever.”

When the curtain closes on the final performance of Grease: “I’m going to cry so many rivers,” Bakari said

The eighth annual curtain warmer fundraiser will be prior to the performance on Saturday, April 14, from 6:30 to 7:45 p.m. at the Arthur Morgan House. Tickets are $25 and include hors d’oeuvres, dessert, sparkling wine and preferred seating at the show. To R.S.V.P. call 767-7766.