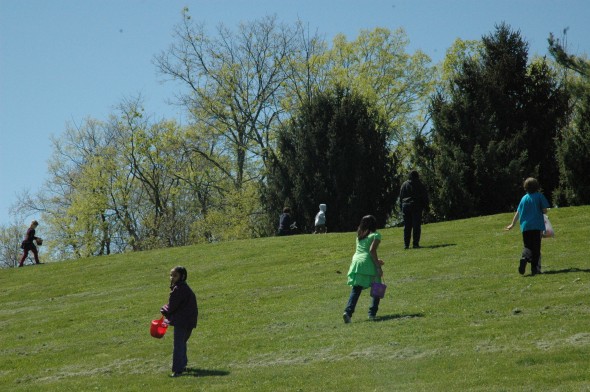 Egg-seekers join the hunt at Gaunt Park on Saturday.

When I was a kid, there were a couple of certainties surrounding the Easter holiday: I was going to have to wear a dress, gloves and a hat, and for the bearing of these atrocities, I would be rewarded with sweets and trinkets. This was an arrangement that worked out nicely for me, especially since, in addition to all the various treats that were left behind for my sister and myself by the Easter Bunny (who, by the way was most definitely real: the tooth prints he left behind in the carrots were solid proof), there was also the prospect of the Easter egg hunt.

I like the idea behind this particular style of holiday gift-giving, a kind that says, “Sure, you can have stuff, but my friends, you’re going to have to go out in the back yard and get it yourself. Here, take these baskets with you.”

And there were always bonus eggs, of course, those being the ones we didn’t find in the yard last year. Particularly nice was when we would find them in the middle of summer, like maybe the ol’ bunny himself got bored and decided to drop a surprise for us in his off-season. Chocolate melted? Jelly beans a little hardened, perhaps ant-laden? We were children. Normal food standards did not apply to candy.

On Saturday, we took our 19-month-old, Lucy, to her first ever egg hunt. Central Chapel AME Church holds an annual hunt at Gaunt Park, and the fine folks in charge, by their own estimation, had hidden around 800 eggs, all told. There was a patch of grass under the trees by the parking lot covered in eggs for those 4 and under, and a larger hunt for more skilled egg-seekers, which extended up the hill by the pool and into the pine trees. The Easter Bunny was in attendance, spreading goodwill (and doling out sweets) to the 70 or so people who showed up. 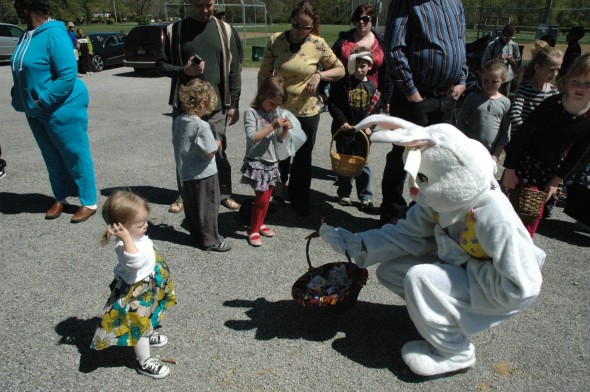 It was an impressive scene: as the time for the hunt grew closer, the ladies in charge gave the countdown. A look of determination spread over the faces of all the hunters, legs moving in anticipation.

As I said before, Lucy had never hunted eggs, only being a dedicated walker for about six months now. When go-time was called, and everyone rushed to the grass, she seemed mostly entertained by all the activity and haste, following the other kids into the grass to see what the excitement was about. 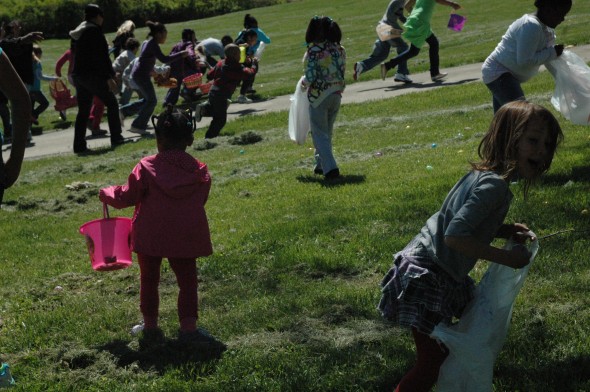 Hunters on the trail.

Lucy  toddled her way up to the eggs, observing them with marked interest, but not really making the connection between the colorful things on the ground and the basket slung over her shoulder, which was almost as tall as she was.

Needless to say, her haul was not impressive: she picked up only two eggs, later having half a dozen more donated to her basket by incredibly generous kids, seasoned hunters who were clearly struck by the shame of such a piddly collection. The eggs Lucy did claim for her own, she studied with great care, picking them up, turning them over in her hand, putting them back in the grass and then picking them up again. 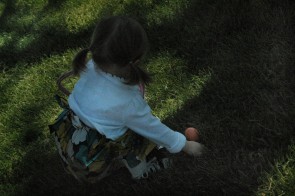 "What is this magic?"

Anthony and I tried to urge her forward, seeing the mass of eggs begin to disappear as they were collected, but she was oblivious to our ministrations. To her, this little thing with such a minute grasp on the English language, we surely sounded like adults of the Charlie Brown variety: so much muffled background squawking, while she was doing the very serious work of observing and studying human action.

When all was said and done, and the last of the weary hunters began making their way down the hill, Lucy kept walking around in the grass under the trees, stopping now and again to check her basket inventory, and finally taking one out to inspect it. She held it up, pressed it against her face for a moment. Then, as though sensing a great revelation was just in sight, she held the plastic egg in both hands. Carefully, she separated the halves, revealing the mystery inside. 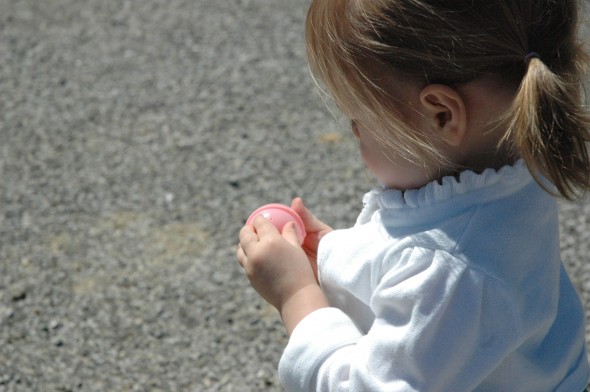