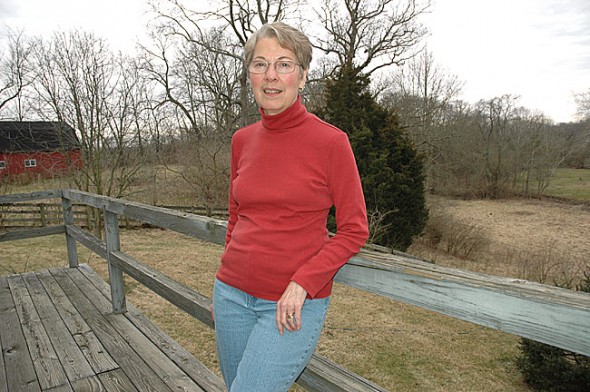 Longtime Yellow Springs novelist Ruth Myers has recently published an e-book, No Game for a Dame, a mystery set in Depression-era Dayton. The novel has hit the top-10 list of historical mysteries on Amazon.com. She’s shown at her home southeast of Yellow Springs. (photo by Diane Chiddister)

20 years ago, Ruth Myers had succeeded where most writers fail. Instead of just talking about writing novels, she reliably produced them, becoming a dependable midlist author for mainstream publishing houses such as Fawcett and Ballantine. But the difficult world of publishing became even more challenging as large conglomerates bought up smaller publishing houses, and Myers found that an editor who loved her latest book one day had lost his job the next. Finally, the publishing business became so discouraging that she opted out altogether.

But two decades later, things have changed. Many writers have taken publishing into their own hands, and are either on their own or with small independent presses publishing their books for electronic reading devices, such as Kindle. While initially hesitant to enter the world of electronic reading and publishing, Myers surprised herself by taking to the process with pleasure. Now, she’s published a new e-book, No Game for a Dame, a mystery novel set in Depression-era Dayton. The book is available at Amazon.com. (readers can also order a print-on-demand hard copy), and recently, the book has climbed to the list of Top 10 Historical Mysteries on the Amazon.com site.

“This seems to me sort of Occupy Publishing,” Myers said of the trend toward writers bypassing the traditional process in favor of electronic publishing. “It’s more a people’s movement. There’s a closer connection between reader and writer.”

For instance, many of Myers’ readers find her book online at GoodReads.com, where in readers’ forums they can contact the writer to ask questions or comment on the book. GoodReads has 5 million members, divided into groups of specialized reading taste, such as readers who prefer mysteries with female protagonists. That’s the category that Myers’ new book falls into, as she has created the Dayton private investigator Maggie Sullivan, a gutsy “broad” who keeps a .38 under her seat and a bottle of gin in her desk, making her way in the tough, man’s world of Depression-era Dayton.

A strong woman who’s not above using her “great-looking gams” to her advantage, Maggie was modeled on two strong women who influenced Myers’ own life. Both her mother and mother’s best friend from college became teachers in an era when most women didn’t work, living in rooming houses and riding mules to the one-room school houses where they taught in Missouri. Growing up, Myers heard many stories of her mother’s experiences as a single working woman during the Depression, and some of these stories found their way into the book.

As well as setting her story in the Depression, Myers plans to stay with Maggie Sullivan stories through the World War II years, partly because she wants an opportunity to look more closely at how people lived during that time. Women, especially, took on new opportunities they had because men were in the service, and everyone was engaged with the war effort in a way that seems alien to us now.

Myers chose Dayton for the story’s backdrop since she’d worked there herself as a young journalist for the now-defunct Dayton Journal Herald, and she was intrigued by Dayton’s rich history, especially up through World War II.

While Myers had thought years ago that it was possible for her to give up writing, she’s found recently that she’s much happier working away on another novel.

“Writing is the essence of who I am,” she said. “I see plots and stories on a day to day basis that seem interesting. It’s easier to set them down than to have them trundling around and elbowing me.”

Myers knew in the third grade that she wanted to write for a living, and pursued journalism at the University of Missouri after spending the later part of her childhood in Wyoming. She then worked for a paper in Michigan. After she met her husband, Henry, who was in the Air Force, the two moved to the Dayton area, and Ruth got a job writing for the Journal Herald. She discovered Yellow Springs when sent on an assignment to write about the Fels Institute, and returned to tell Henry that they should move here. The couple moved to the village in 1971, and lived here in 1992, raising their daughter, Jessica, in the village. Since then they have lived in the home they bought southeast of the village on Clark Run Road.

In the 1970s and 80s, Myers wrote eight published novels, including the suspenseful Journey to Cuzcan, the romantic fiction Costly Pleasures and Captain’s Pleasure and ending with A Touch of Magic, using in that book knowledge she gained as a professional musician. While Myers was constantly doing the creative work she loved, she was also pressured by the publishing houses to produce what sold best, and so veered into romantic fiction, where she felt less at home. So leaving the world of fiction-writing when the publishing business declined was less difficult than it might have otherwise been.

During her most productive years, Myers credits the Yellow Springs Writing Group’s weekly meetings with sustaining her.

“I don’t know if I would have evolved as a writer without their encouragement,” she said. “It helps a lot having a support structure like that.”

Myers tried her hand at other kinds of writing after she gave up novels, but missed telling stories. About five years ago, when a friend loaned her a Kindle, and Myers reluctantly tried it, she surprised herself by getting hooked.

The Kindle is more convenient than a hard copy book in many ways, such as being lightweight and easy to stick in a purse. Myers was also delighted at the new authors she was able to find and read for little cost, discovering the writers on GoodReads or Amazon, then paying only $.99 or $1.99 to download the books into her Kindle

“For any high volume reader, it’s a way to discover these new authors,” she said. “Some of them are spectacular.”

Several years ago, the idea of returning to novel-writing in this new format began percolating in Myers. She wrote a draft of her book and had it accepted by Tuesday House, an independent publishing house with virtual offices. While her publisher offered editorial review and help with marketing and promotion, Myers has also played a role in her book’s publication by making design decisions. She chose local graphic designer Alan Ramey to create a cover that suits the noir style of the book.

Having had a good experience with No Game for a Dame, Myers is already at work on her second Maggie Sullivan book, sometimes sitting for hours in the Dayton Public Library to get the period details just right. She’s thrilled to be doing her creative work again, and doing it exactly as she wants to, without being confined by the bottom line needs of a publisher.

“Coming back to writing at this point in my life is not about making a living,” she said. “It’s about writing what I want to write. It’s about having freedom.”