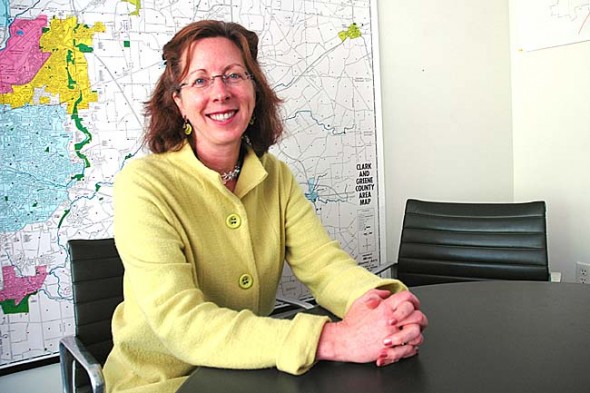 Coming out of an executive session that followed their regular June 4 meeting, Village Council members unanimously voted to offer the job of permanent Village manager to Laura Curliss, who has been the interim manager since February. Curliss verbally accepted the position.

“You have a deep knowledge and capacity that is difficult to capture in a small town like ours,” Council President Judith Hempfling said to Curliss following the Monday night vote. “I’m hopeful that we will accomplish a great deal for the public good and will move our public goals forward.”

In response, Curliss stated that, “I’m here because I have a lot of the same interests that people here have,” citing solar power, affordable housing, the arts and land preservation, among others. “I’m interested in how small communities stay economically viable. Nurturing creative people is the right way to go.”

In an interview following the vote, Curliss said that details of the contract, including salary, have not yet been worked out.

Asked her first priority on the job, Curliss, an attorney, said it’s impossible to isolate one thing.

“There’s so many balls you’re juggling, and what’s the priority depends on the day. You have to keep the agenda moving in the right direction. This week, it’s Street Fair,” she said.

Curliss and her husband, Patrick Gentile, who is the medical director and CEO of the Community Care Hospice based in Wilmington, plan to move to the village with their 15-year-old son, Michael, as soon as they find a house, she said in the interview. Her family is already very familiar with Yellow Springs, as her husband and son come hiking in the Glen regularly, and the family walks and bikes together. Curliss said she hopes to find a house that allows her to walk or bike to work.

When she’s not working, Curliss says she enjoys practicing yoga, taking photos and writing. And when she and her family move to town, Curliss looks forward to taking part in village activities.

“There’s a lot going on in Yellow Springs,” she said. “That’s why people want to live here.”

Council hired Curliss as interim Village manager in February, just before the departure of former Manager Mark Cundiff, who took a job as manager of Sidney. Previously, Curliss had worked for seven years as executive assistant to Mayor David Raizk of Wilmington and before that in the Clinton County prosecutor’s office.

In February Council had stated it would follow the same open search process that it used earlier for former Manager Cundiff. Later that month the search process was dropped, when it became clear that Curliss was interested in applying for the permanent manager job. However, Council members did not clearly announce at that time or later that they were no longer holding a search process.

“I think we mishandled the process in terms of not being more clear,” Lori Askeland stated, reading from an e-mail communication to citizens.

Various factors contributed to the lack of clarity, Askeland said, stating that, “I can assure you that it wasn’t a deliberate act of obfuscation, so much as not having our eye on this particular ball at the right time and in the right way.”

While she regretted the process, Askeland stated she favored hiring Curliss because, “of all the managers, and manager candidates I have been able to interview, Laura Curliss is, bar none, the most knowledgeable and has the most desire to accomplish things, even take on new and significant projects, of all the serious candidates we have had or interviewed.”

Askeland and Karen Wintrow, having both gone through several search processes, emphasized their awareness that there are few manager candidates in the area appropriate for Yellow Springs.

“There is a limited pool of candidates out there, and the pool with the skill sets we want is very small,” Wintrow said.

Council “has the right and the responsibility” to hold personnel discussions in executive sessions, Hempfling stated, saying that Council decided to move ahead with hiring Curliss after several months observing her on the job, along with receiving feedback from Village staff and many villagers. She stated that Council continues to welcome feedback from citizens.

Other items of June 4 Council business will be in next week’s paper.