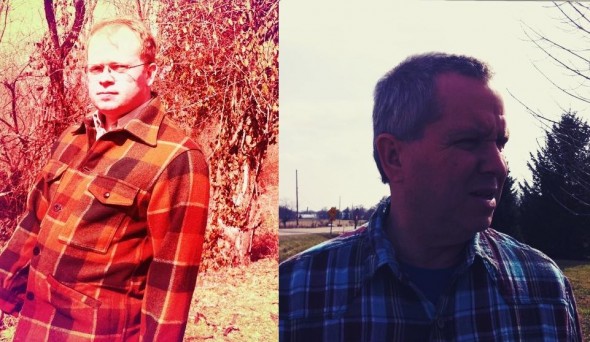 When I first started this blog, it was upon the premise that I’d write about my foray into Yellow Springs life as a newcomer and relative outsider. Since then, I have occasionally written about ventures into wild, new territory in a more metaphorical sense. Today, I’m writing about a particular terrain that will, in many ways, always be uncharted to me: fatherhood. I can only faithfully record my observations on dads and their doings through my experience with the two closest fathers of my acquaintance, those being the father of my child, Anthony, and my own very esteemed daddio, the Right Honourable Reverend Pat Aron Shows, Jr., known to friends and loved ones (and everybody else) as Chip.

Before sitting down to write this blog, I called my dad, who lives in Florida, to ask him to weigh on in the institution of fatherhood. He has, as Anthony put it, “been weighin’ in on this thing for almost 30 years,” but I thought it would at least be the journalistically sound thing to get his opinion on the deal. Fatherhood is, to him: “The greatest thing that’s ever happened to me; the most fulfilling, most challenging. I think that’s about it.”

But, because this is a blog, and I have to create some sort of narrative here, I’ll go ahead and expound on that.

My dad was born, I think, in Mississippi, or thereabouts. Up to the writing of this piece, it occurs to me that I have never bothered to ask. This may cast some doubt into your mind, dear reader, about my reliability as both a writer and a daughter, but you must believe me when I say that, if Mississippi ain’t it, it’s close enough.

After his birth, the details are a bit fuzzy for me; I know he is the third of four children, the other three being my aunts Sheila and Daphne and my uncle Gary. I have some vague idea that he went to school, where he presumably made friends. At some point he had aspired to be a pilot, like his father before him, but was ultimately led to pursue a vocation as minister in the Congregational Methodist Church. To this end, he attended Wesley College, which Google confirms for me definitely is in Mississippi. It was at Wesley that he met my mother, Brenda, and was, I assume, wooed by her considerable beauty, grace and hilarity, and married her in short order. A few years later, he accomplished his crowning achievement: myself. This great work was, two years later, revised with the addition of my sister, Hayley, and 15 years later, an epilogue was added in the form of my now-10-year-old sister, Madison. I have been assured that no further chapters or appendices will be added.

Being the daughter of a preacher means living in a weird sort of spotlight: one is expected to behave as befits the child of the clergy, but one is also allowed certain freedoms. Perks, if you will. For example, our best imitation of silence during and attention to my dad’s sermons was always required. However, after the once-a-month communion Sunday services, Hayley and I were allowed to rush the pulpit and partake of any remains of the communion meal (which, in our church, was oyster crackers and grape juice in tiny plastic cups).

My dad’s other great love, besides his family and the Heavenly Host, has always been computers. My dad used the internet, for example, in one of its earliest forms, the BBS. One of my earliest triumphs in my lifelong quest to impress my dad was the cracking of his computer’s password at the age of 7; I have long assumed that this genius work of deduction was what led him to build me my own computer the next year, either as a reward for my ingenuity, or as a means of keeping me from screwing around with his machine. 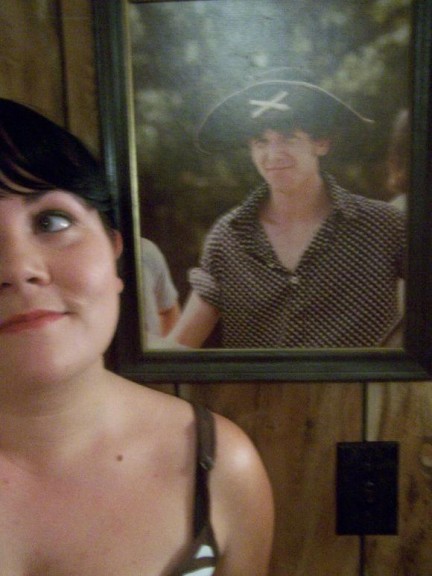 Me, circa 2007, and my dad, circa 1970-something. Supposedly he was participating in a Civil War re-enactment; I'm not sure which side the pirates fought for.

My dad taught me to catch a fish with a cane pole, and I still have a very visceral recollection of him guiding my small fingers as I scaled and gutted my first fish, a good-sized bass, which we ate for dinner. He also taught me how to mow the lawn (which I never did) and how to create a simple DOS-based program (for my third-grade science project; I forgot how like two weeks later), and told me that “Kommen Sie!” was German for “Come, you!”, which is what the SS guards in the game Castle Wolfenstein were yelling at me.

All the other various details of my dad’s dad-hood will always be lost to me; as a child, I neither possessed nor desired insight into the trials that either of my hallowed (and harrowed) parents faced when raising my sister and me. Since becoming a mother, the mysteries of my own mother’s parental years has slowly begun to decode, like a book I’ve always had but could never decipher, being translated a page each day. But to know what it was like for my dad, the best I can do is to observe my partner, Anthony.

As with my dad, I asked Anthony to compose “one sentence on parenthood.” Here’s what he gave me:

“Given the multitude of possible avenues a life, my life, might have explored, I regard it as strange and still a bit surreal that I find myself in possession of a going-on-two-year-old who demands of me far more than I knew I had to give. Yet, despite the oddity of my current circumstance – and all the curiosities and novelties it does arouse- I know it, motherhood and fatherhood, to be a common feature of the species, quite unoriginal, which forces a convenient perspective on my daily choice to stick with the ones I love. The only possible insight I might be able to share to those pursuing a similar course of action can be summed up in two words: good luck.

In case what you have just read deviates too greatly from the ‘one sentence on parenthood’ that Lauren asked for, let me try again:

I do not always like being a parent, but I do always love my daughter.”

Thanks, Anthony. My turn.

In my estimation, Anthony is the epitome of dad-ness: that is to say, he works his butt off at it. When I told him, tremulously, that he would soon join the ranks of father-dom, his first response was to hug me and assure me that we were going to be an excellent trio. What this meant for him was being an equal schemer in the caper that has been the raising of our daughter, Lucy. Since her birth, Anthony has tackled the challenges and relished the joys like somebody with a serious mission. The baby’s hungry? He’ll shove that spoon full of pureed peas into her face with a vengeance. She’s just soiled her diaper so hard that it shot up her back? He’s got the wipes ready and the tub filled, and why don’t I go sit on the couch and watch Star Trek? Sounds good, chief. He’s instituted a rule for himself which states that, at any point, when Lucy brings him one of her books and places it in his hands, he must stop whatever he’s doing immediately and read it to her. This means that he can now recite the full text of Good Night Moon in his rich baritone to a room full of seasoned listeners with perfect accuracy. He has also become quite skilled at diverting Lucy’s chatter to more suitable topics should she choose to remember and repeat one of those colorful words she’s heard Mommy exclaim on occasion. 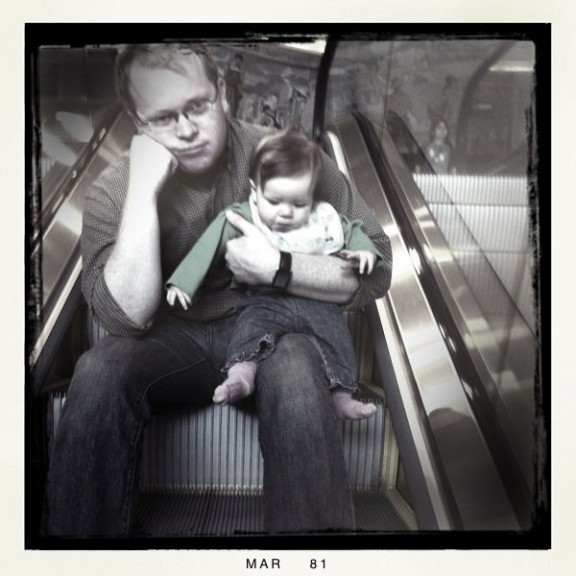 Despite these attentions and devotions, Lucy seems to maintain that she prefers me. (Bragging? Of course I’m bragging, y’all.) Nevertheless, it was “Papa” she learned to call on first, and Papa was the first person not physically connected to her with whom she formed a relationship; the actual first person to see her emerge into this world. Mothers get a lot of praise (don’t get me wrong, we totally freakin’ deserve it), but dads sometimes get the short end of the stick. A neighbor of ours recently told me, “We kind of get the shaft present-wise during grade school years; Mother’s Day is in May, and kids always make their moms a present at school, but by the time June rolls around it’s summer vacation, so no handicrafts for us.”

Outside of popsicle-stick frames and holiday-themed acrostics, there’s also the little thing about moms and babies inhabiting the same body for the better part of a year. Something about that means instant mom-child connection. But Dad doesn’t necessarily get that built-in connection. He has to work a little harder to make that bond. It’s like trying to be best friends, every day of your life, with somebody who, at the risk of too many scatological bon mots, won’t stop pooping in the bath tub. And who, after you’ve cleaned up their mess, rewards you by running to Mom for hugs.

This is what impresses me by my two beloved dads. I see them as loving stage hands, changing props and adjusting lighting, so that the stars can get on with their work of dazzling everybody.

Perhaps I idolize a bit? Well, I’ll take my leave to do so. Today, I’m saying “thanks” to all the dads out there who love their families, and to all the moms and aunts and uncles and grandmas and grandpas and everybody who has a hand in directing a new person into the somebody that they’re going to be.

And to my dad: thanks for not freaking out too much the time me and Hayley burned all the grass in the yard. But it grew back the next year; no hard feelings, right?