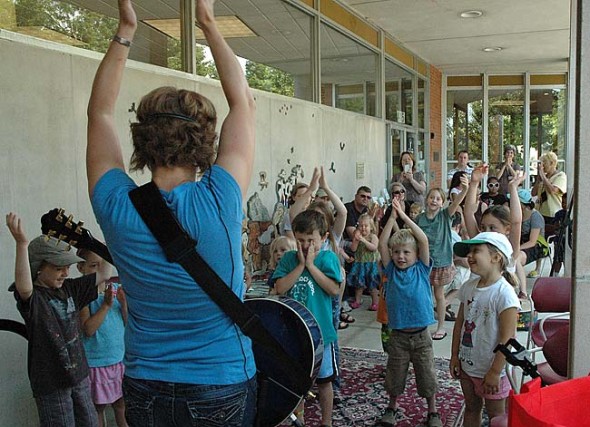 Kids gathered on the library steps on Saturday morning during Street Fair to hear Dorie Phillips sing and dance at the library. (Photo by Lauren Heaton)

Reading a summer portal for all ages

How can a person meet the woman behind Tiffany’s glass, learn Arabic, relive the Apollo 11 lunar landing, unravel the secret plot against an ophanage in Botswana and travel through time and space in one summer? By tapping the imagination through reading, of course. The Yellow Springs Library is ready to chart a custom itinerary for anyone interested in crafting a new experience for themselves through the library’s summer reading programs. While the library is keen to make kids and teens more aware of its stores, adults are also invited to get reading this summer. And if broadening horizons doesn’t incentivize, then perhaps cold, hard prizes will.

“Dream Big” is the theme of this year’s summer reading program, at the heart of which is a reading log that allows patrons to keep track of the number of hours (kids and teens) or whole books (adults) they read between now and Aug. 1. For every eight hours youth read, they can present their reading log at the library to get a prize, which could be anything from a pen to a water bottle or a book. For adults, the challenge is a little more hefty (five books), and so is the prize (a chance to win an iPad).

Admittedly, there can be barriers to reading. The first task for a reader is finding material of interest. But how does one navigate the hundreds of thousands of books and magazines the library holds? Last week several librarians and local residents shared some of their favorite recent reads and the culling methods they plan to use this summer to get their hands and eyes on more of the books that matter to them and to the library’s patrons.

Every summer for the past three years, Keira Fogarty, 10, has packed her lunch and taken it to the library’s Lunch Bunch to eat and talk about books with other kids. That’s where she heard about Rick Riordan’s modern Greek mythology stories and proceeded to devour every last one in the series. Then she went rummaging through the stacks and fell upon British author Cathy Cassidy, who wrote Indigo Blue and Nature Girl, both of which Fogarty loved, and which lead her to the more mature material in Suzanne Collins’ The Hunger Games.

Henry Crews, 18, is another avid reader who found early on that classics like Gulliver’s Travels and The Adventures of Baron Munchausen were a “great escape from the dullness of life.” He hasn’t stopped reading since. He finds books through sheer volume trial and error, checking out 20 to 30 books at a time and only stopping to read the really good ones, such as Toni Morrison’s The Bluest Eye or Roger Zelazny’s Creatures of Light and Darkness, a modern take on Egyptian mythology. For political funnies he greatly enjoyed recent books by Steven Colbert, Jon Stewart and Is It Just Me or Is Everything Sh*t?: The Encyclopedia of Modern Life.

For local resident Kathy Beverly, who reads an average of three to four books every two weeks, the method of good book hunting can be more methodical. One of the “smartest things she ever did,” she said, was use the Washington Post’s “Best Books of 2011” list to get last year’s top 50 best fiction and 50 best nonfiction books. Among them she’s found gems such as The Evolution of Bruno Littlemore (a chimpanzee), Edith Pearlman’s short story collection Binocular Vision, and Jamrach’s Menagerie, a high seas tale about a search for a Komodo dragon.

While local librarians Ann Cooper and Connie Collett were shy to let on about their favorites books, they are never short on methods for finding what are soon to be yours. For this summer, the adult recommendations for light summer reads include Andrew McCall Smith’s Limpopo Academy series about a Botswanan women’s detective agency, the story about the woman behind the famed stained glass in Clara and Mr. Tiffany, and Summer Rental, about three 30-somethings vacationing on the Outer Banks. For young adults, the list includes Okay for Now, by Gary D. Schmidt, about two misfits who discover through adventure their mutual curiosity about birds and Broadway; Hoot, by Carl Hiaasen, about two boys who attempt to save a colony of burrowing owls from a proposed construction site; and Madeleine L’Engle’s classic fantasy A Wrinkle in Time. Younger readers may wish to seek out the illustrated Joha Makes a Wish: A Middle Eastern Tale about a wishing stick that brings bad luck; The Dream Stealer about a plucky Mexican girl’s adventure with the Dream Stealer and his dream castle; documentary styled Team Moon: How 400,000 People Landed Apollo 11 on the Moon; and Newberry Medal winner When You Reach Me, about a 12-year-old New York City girl who receives a series of mysterious notes that defy the laws of time and space.

While the librarians themselves are an enthusiastic resource for tracking down material, Cooper suggests that the library Web site can also be used to find books in imaginative subcategories including Asian fiction, urban lit, here be dragons, just for laughs, paranormal romance, Christian thrillers, Westerns, gentle reads, culinary comfort, etc. (which can be further subdivided into ages 0–8, 9–12, teens and adults). From the Greene County Public Library home page, click through “Find Answers” to “Research Databases” to “Home Access” to “Literary Sources” to “NoveList Plus,” a site that also recommends books based on other books one has enjoyed. The American Library Association has lists of book award winners, notable books and publishers lists of top reads. And for kids, the Yellow Springs library has an A to Zoo reference for finding best books, and parents can also use book lists published by trusted literary advocates such as Nancy Pearl or Jim Trelease.

Though Fogarty has been a zealous reader since her grandmother Gerry began taking her to the library as a toddler, she does things at the library other than reading. This summer for instance, the library has scheduled a host of events for kids, teens and adults, including for the kids, Slime! Return of the Boonshoft on June 19, Cowboy Magic with Mark Wood and his rope tricks on July 18 and The Turtle Lady and her live reptiles on July 30. Teens might enjoy a rocket launch on June 16, a henna art workshop on July 9 or a fencing and sword fighting demonstration on July 17. And adults could learn how to use their e-readers with a workshop on June 19, see a traditional Japanese kamishibai storycard theater on July 2 (with Hazuki Kataoka and David Battino) and sample some treats from Argentine chef Mariano Rios’s live-fire grill on July 23 (grilling demo outdoors in the library parking lot).

Simply by hanging around the library, local youth Sophie Bottelier and Keldon Harker say they “just find books” they want to read. Harker has already logged two hours and 15 minutes of reading time this summer with the Inheritance dragon series and as of last week was in the middle of Dragon Born. Bottelier has logged an hour and 20 minutes and is currently engulfed in the Little House on the Prairie series. She found by hanging around books that she has a serious interest in the history and culture of Egypt.

“I like ancient Egypt and the fact that they used pyramids and guard mummies to protect them in the afterlife,” said Bottelier, who is going into the third grade. “In first grade I stole an Egypt book from my friend and read it. (I gave it back!) And now I just love it.”

While all three youth are dutifully recording their reading time, clearly it isn’t just the prizes that motivate them to keep going back for more books. Crews, who also logged reading time as a kid, eventually became such a book enthusiast that he wanted to share it with others and has been an organizing member of the library’s Teen Advisory Group for several years. And Beverly, who has been a compulsive reader for over 50 years, has never tired of her attraction to books and the doors they open.

“It really is that books show you things you wouldn’t encounter in your regular life… especially getting different points of view,” she said. “In his books Edward P. Jones reveals the African-American experience, the history and the sensitivity of the current situation. I would never have that perspective if I hadn’t read about it.”

To register for any of the summer reading programs, collect a reading log at the library or sign up at http://www.facebook.com/greenelibrary.info .