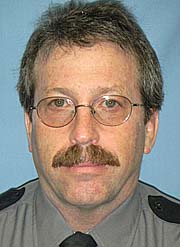 Yellow Springs Police Sergeant Tom Jones retired from the force last week, several days before an internal hearing focused on his conduct was scheduled to take place. Jones’s retirement was effective on July 1. He had been with the Yellow Springs Police Department since 1984.

On Friday, June 15, Interim Police Chief Arthur Scott suspended Jones after the sergeant refused to follow an order at the beginning of that week to report to the ACE Task Force. Yellow Springs police have in the past provided one full-time officer to the Task Force (headquartered in Xenia). Yellow Springs police officer Andrew Gault was the department’s representative until he left the department in early June. According to Village Manager Laura Curliss, who oversees the department, Jones was assigned as Gault’s replacement to the Task Force.

In a memo to staff on June 15, Chief Scott barred Jones from the department until a fact-finding “predisciplinary conference” could take place. The hearing was scheduled for Friday, June 22, rescheduled for June 29, and was finally canceled when Jones announced his retirement. According to the notice for the hearing, the charge against Jones “may be the basis for disciplinary action (up to and including discharge.)”

Jones, 52, joined the Yellow Springs police in 1984 as a young officer and earned the rank of sergeant in 1994. He applied for the jobs of interim police chief in 1997 and police chief in 2003, but was not appointed. He had recently been working the night shift.

Jones, who lives just outside Yellow Springs, took a retirement option open to him in 2009, and returned to work through an Ohio Public Retirement System program that required him to serve another three to eight years. In May Jones reached his third year of mandatory service and will receive full retirement and benefits compensation, in addition to a $35,000 severance package, according to his retirement agreement. Also as a routine part of the agreement, both the employer and the employee agree to withdraw any pending grievances or claims against one another, and the employee also agrees not to make disparaging comments about the former employer. According to Curliss, there will be no further action from the Village. She thanked Sergeant Jones for his service to the village. Jones declined to comment for the story.

Next to Jones, officer Pat Roegner, who has been a Yellow Springs officer for six years, is the local department’s most senior officer. The department currently has six full-time police officers and a handful of active part-time officers.

The Village plans to fill Jones’ position by hiring a new police officer soon. The department has also increased one of its part-time officers to full time to replace Gault. Curliss said she would be working with Interim Chief Scott to assess the needs of the department and decide if naming another sergeant is necessary.

“Departments as small as ours often operate without sergeants,” Curliss said.

The Village is still in the process of designing a search for a permanent chief of police. At Village Council meeting this week, Curliss proposed the Village solicit résumés this month and have an interview panel select the finalists in August. Finalists could attend an open house, and the public could give feedback to the manager, who’s job it is to hire the chief. Council members preferred to perform the search in the fall.