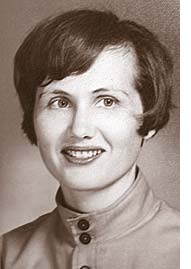 Patricia was born Oct. 29, 1931, the third of three daughters born to Francis Wayland and Dolly Lucille Hunt of Cincinnati. Her sisters were eight and 10 years older and still remember arguments over pushing Patsy’s baby buggy. Patricia showed early academic and musical promise. She completed first and second grades in the same year, skipped eighth grade and graduated from Western Hills High School at age 15. Cello lessons began at age 9 and by age 11 she knew that she wanted to become a professional musician. Pat and her first husband, Allen Winold, graduated from the Cincinnati College of Music in 1950. They performed with the North Carolina (traveling) Symphony and lived in Columbus and Wilmington before moving to Bloomington, Ind. At Indiana University, Patricia earned master’s degrees in cello and English. The couple had two daughters — Claire Elizabeth and Erika Marie.

After her marriage to Allen ended, Patricia taught English at Southern Illinois University in Carbondale. She then accepted a position at what was to become Wright State University as a member of its inaugural faculty. At Wright State, she taught both English and music history, headed the International Studies Program and played in the faculty quartet. Searching for a home, Pat thought immediately of Yellow Springs, which she remembered fondly from attending summer Shakespeare at Antioch’s Amphitheatre during college.

Patricia was first diagnosed with multiple sclerosis in her 20s. For many years, it was a disease of exacerbations followed by remissions, but in 1984 Patricia took early retirement from Wright State due to her diminished mobility and energy. She adapted musically to her illness by switching from cello to viola da gamba, a fretted instrument. Patricia’s Early Music Center, a performing and teaching organization, was granted startup seed money by Village Council and the Yellow Springs Community Foundation. The Early Music Group performed throughout the state, including for an El Greco exhibit opening at the Toledo Art Museum.
Patricia met Raymond Olds at a local Peacemakers meeting. They were married in 1967.
Before MS made it difficult, they enjoyed camping and canoeing together, and later they cruised. Patricia and Ray renovated a farmhouse near the Glen and she donated one of the earliest easements in favor of the Tecumseh Land Trust. Although they divorced in 1987, Pat and Ray remained loving companions — at least most of the time — until his death earlier this year.

Pat was a regular writer of letters to the editor. In one published last year, she referred to Yellow Springs as her “intentional community.” She gave back to the village in many ways. During the early ‘80s, a contentious time, she served on the school board. She started a mentoring program for the McKinney School in the 1990s. More recently, she served on a steering committee for the Visioning Project. She will probably be most remembered for her work as convener and chief gadfly of the Accessibility Committee. The efforts of that group led directly or indirectly to improved access to the post office, Tom’s Market and the Senior Center; and to much needed attention to the condition of sidewalks.

In national politics, Patricia was a lifelong “yellow dog” Democrat and worked for Howard Dean, Hillary Clinton and President Obama, among others. She was a staunch and generous supporter of the ACLU.

Patricia said she did not expect to live as long as she did, as she had been told that her type of MS was life-shortening, not life-threatening. She died of inoperable necrotizing fasciitis, a complication of pressure ulcers. Although the time from diagnosis until her death was short, both of her daughters were able to be with her, sing to her and nurse her.

Besides her family, music and literature, Patricia loved good food, good movies, good conversation and Scrabble. Fittingly, she won her last two Scrabble games, one with her friend Janeal Ravndal and one with Claire. At her request, there will be no memorial service per se, although one of her Scrabble groups recently toasted her with tea and cookies, and a tree planting and picnic will be held at Ellis Park in late October. Patricia is survived by her daughters, Claire Winold of Yellow Springs and Erika Werdal of Blaine, Wash. She is also survived by grandchildren Dana and Lucas Werdal and Noah Winold, great-grandson Osiris Miner, sisters Marjorie Sutton and Marion Massman, nieces Leslie Barton and Melodie Hood, nephews Mike and Brian Sutton and honorary nephews Ed Sabrack and Don Hollister. Donations in her memory may be made to the ACLU or the Yellow Springs Community Foundation.