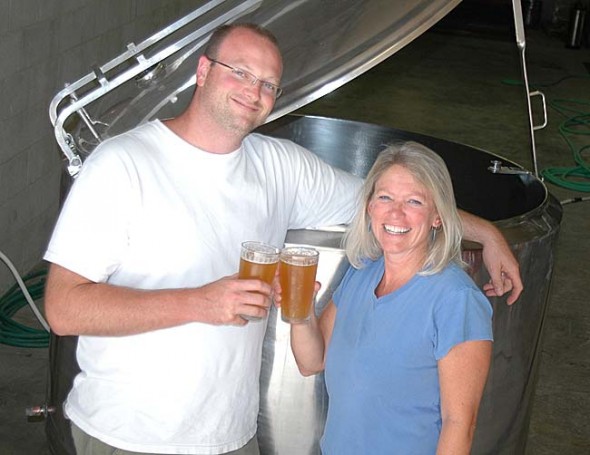 Beers crafted to please the palate

The craft beer revolution is coming to Yellow Springs, say the owners of a new microbrewery here whose aim is not to transform local hearts and minds, but palates, one batch of handcrafted beer at a time.

For Nate Cornett of the Yellow Springs Brewery, who is hoping to begin serving customers at the company’s MillWorks location by year’s end, the revolution is about moving beyond domestic lagers the likes of Budweiser and Coors for a fresher, more flavorful beverage.

“This is the chance to know who makes your beer and to know what goes into it,” said Cornett, who co-owns the business with his wife, Lisa Wolters.

Cornett, an information technology contractor, and Wolters, a ceramic artist and graphic designer, have long dreamed of opening a microbrewery here. (More than four years ago they reserved the website domain: yellowspringsbrewery.com). Now the time seems to be ripe. Sales of craft beer grew 13 percent last year alone, while the number of U.S. breweries reached its highest level since 1887, according to the Brewers Association. Yellow Springs Brewery is one of six microbreweries in the Miami Valley in the planning stages or recently launched, and one of two slated (the other, Vitruvian Brew, is also located at MillWorks) to open in the village.

“When I first moved here, I thought a brewery would be a perfect fit for this town,” Cornett said. According to Wolters, not only is Yellow Springs a fun community with a tourist draw, it has an arts and crafts culture that would appreciate an artisanal product and an environmental community that favors local food.

Cornett went on to experiment with beer recipes as a homebrewer and volunteer at an area microbrewery to get some chops in the brewery world. But he won’t be alone in production. Joining the team as Yellow Springs Brewery’s lead brewer is Jeffrey McElfresh of Kettering, an experienced homebrewer with a fixation on quality.

“The quality of the product will always come first because everything that we do will be based upon what’s best for the beer,” McElfresh said. “What we’re looking for in our beer is a full-flavor beer that’s drinkable that sets itself apart based upon aroma, flavor, mouth feel — all the things that go into a fine beverage.”

A small, independent brewery, Yellow Springs Brewery will offer high-quality brews to drinkers discerning tastes in a range of styles — from India Pale Ales to Belgium saisons to Irish stouts. But for those who are most familiar with domestic lagers, there will be lighter options too. Take Cornett’s signature Cream Ale recipe, which he refined while homebrewing. It’s a flavorful yet drinkable ale that aims to please, and possibly convert, fans of American macrobrews.

With brewery tours, tastings events, and specialty beer releases, Cornett and Wolters hope to educate local beer drinkers as much as refresh them.

“We want to expand people’s horizons and encourage them try new things,” Wolters said. “We have to convert the non-craft beer drinkers over.”

Wolters herself was once wary of craft beer, which can have a “hoppier” and thus more complex flavor. Now she enjoys more variety in her beverages, takes a more confident approach to experimenting and though she is not yet a “beer geek,” is well on her way, she said. For her part, Wolters is excited to own a local company, and hopes the business will someday serve its beer in locally-made ceramic pint glasses.

To satisfy the “beer geeks,” Yellow Springs Brewery will experiment to create top-notch brews, using an all-grain process for a more natural and better tasting beer. And since freshness is key to flavor, they hope to distribute on-site as much as possible.

“Beer is alive,” Cornett explained. “Craft beer is still alive when you’re drinking it. For some beers, the longer they sit, the more flavor they lose.”

Much of the beer they produce will be sold in the brewery’s tasting room. Thanks to an Ohio law passed last year, licensed breweries can now sell beer on-site — by the pint — without an additional costly tasting license. Cornett and Wolters also plan to sell beer in refillable growlers, large 64-ounce jugs, and to distribute kegs to area bars and restaurants. A bottling or canning line may be added a few years down the road.

Meanwhile, Yellow Springs Brewery, which is independently financed, is moving quickly to get up-and-running by the end of the year. Last week Cornett and McElfresh were busy hauling in several loads of shiny stainless steel equipment to the 3,800-square foot production and retail space at the MillWorks Business Park on North Walnut Street. Recent additions are a 600-gallon hot liquor tank to heat water, a 300-gallon mash tun repurposed from a dairy farm in Wisconsin and three iconic conical fermenters. Production will begin with three seven-barrel batches per week, the equivalent of about 168 kegs per month.

Because sustainability is paramount to Cornett and Wolters, they’ve invested in a system that recycles chill water to save both water and energy, and they plan to use local fruits and vegetables for seasonal beers, like a pumpkin ale. Though hops is mostly grown in colder climates, Yellow Springs Brewery is looking to source its hops from Ohio and has already built a relationship with one grower.

Though the brewery has yet to open, Cornett is already taking on the role as a craft beer revolutionary, and his company, whose motto is “Crafting Truth to Power,” is committed to “going against the grain,” he said.

“Speaking Truth to Power was a way to stand up in a non-violent way and make someone listen,” Cornett said. “We’re trying to do the same thing in the craft brewery revolution. What we’re saying is: We want more flavor. We want more styles. We want better tasting beer.”