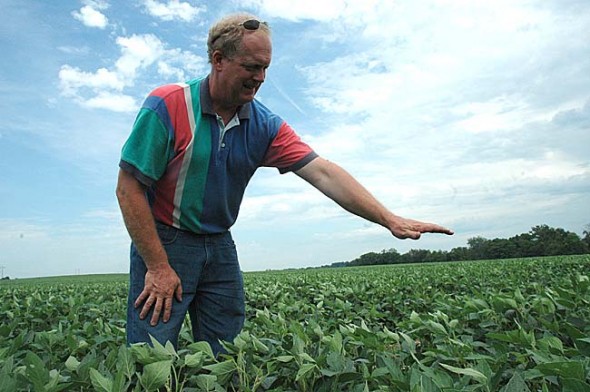 The soybeans at Craig Corry’s Miami Township farm only reach to his knees, when they should be nearly waist high at this point in the season. The moderate drought in the Dayton area has stunted the growth of area soybeans and corn, threatening to cut into yields. (Photo by Megan Bachman)

The hot and dry weather this summer has no doubt stressed local homeowners whose lawns have turned brown from lack of rain. But even more stressed are area corn crops now shriveling in the fields and the farmers who depend upon commodity crop yields for their livelihood.

“Some of it can recover but you’re going to have a lot of yield damage,” said Clark County farmer Mike Haubner of area corn, much of which missed out on precipitation when it needed it most — during mid-summer pollination. Less than 3 inches of rain have fallen in the Dayton area since June 1, nearly 5 inches below normal.

“I can see signs of stress to the plant,” said Miami Township farmer Craig Corry of area corn plants, whose leaves are drawing up like pineapple leaves. But some of Corry’s crop looks healthy, and he remains hopeful that with some rain in August too, much of his crop can be salvaged.

“We probably have across the area suffered some yield reduction, but farmers are eternally optimistic,” he said. “We still have a chance to have some respectable yields.”

By the end of this week an additional 1.5 inches of rain could fall, but in a year that is still 8–9 inches below normal rainfall totals, these rains won’t pull the area out of its moderate drought, according to Myron Padgett, a meteorologist for the National Weather Service.

“There are some showers expected this week, off and on, but not widespread,” Padgett said on Monday. “It would take 5–6 inches of rain to get out of drought conditions and we’re not expecting that amount.”

Even if the rains came, the damage to local corn may already be done, according to Seth Teter, an Ohio Farm Bureau spokesman.

“Unfortunately, the corn crop has been so stressed that the rain we’re now seeing won’t do much,” explained Teter. “For a lot of people’s it’s too little, too late. They might be able to salvage something, but yields will be down.”

Meanwhile, wheat harvest yields came in below normal and the crop of soybeans, though they are more resistant to drought, may suffer as well, according to Haubner, a Clark County agricultural extension agent. Farmers growing fruits and vegetables for the local market have also been affected by the drought. They’ve been able to irrigate their much smaller fields to keep the crops alive, but have had higher water costs and reduced production, they said.

And it likely will remain dry for some time to come. Moderate drought conditions in the Miami Valley are expected to persist through October as the National Climate Prediction Center is forecasting rainfall to be below normal over the next one to three months. Temperatures, which have already reached record highs this month, are also expected to remain above normal.

The precipitation anomaly is not unique to the Yellow Springs area. Nearly two-thirds of the continental U.S. is now affected by drought and the entire state of Ohio is experiencing either moderate or severe conditions. If July rainfall continues to be scarce, the nationwide drought could as bad as the dust bowl of the mid-1930s, according to meteorologist Jeff Masters of Weather Underground. Locally, a worse drought occurred here in 1988, when area corn yields were 25–75 percent below normal, Haubner said.

Early on this season, corn yields were projected to be prodigious. Farmers planted their corn crop early during the warmest spring on record in the Dayton area. There was talk among farmers of “the greatest harvest ever” as corn prices plummeted to around $4 per bushel, according to Haubner.

But a heat spell overtook the area, with 25 days this year exceeding 90 degrees, and the rain stopped falling. Signs of corn stress showed up in leaves that are browning, wilting and tightly curled. With yield amounts uncertain throughout the hot and dry Midwest, corn futures are selling today for more than $8 per bushel, the highest ever.

The corn plant is particularly affected by dry conditions because of its reliance on rain during several critical moments of its growth, especially pollination and grain fill, explained Corry, a sixth-generation family farmer. Pollination begins when tassels appear on the tops of plants. The pollen from the tassels blow off to pollinate strands of silk at the top of an ear of corn to produce kernels. If a silk doesn’t receive pollen, a kernel will not form.

For many fields, pollination is over or nearing its end, and the hot and dry weather may have stymied this necessary phase in a corn plant’s life. As Corry explained, corn plants don’t receive their pollen in extreme heat and dry weather. But luckily for Corry, who cultivated 500 acres, some of his cornfields are just beginning to tassel and the rains of the last two weeks may salvage his crop. The full inch of soaking rain last Friday was a “very, very helpful rain,” he said.

But the rains, even when they have come, have been spotty. On the day that Corry measured an inch of rain just south of Yellow Springs, Doug Christen only tallied 1/10th of an inch at his Smaller Footprint Farm north of town. Hauber said he sees this variability as well. Corn growing across the road from his Clark County farm stands just 1.5 feet off the ground, not far from a plot of shoulder-high corn.

High temperatures have compounded the problem. Soils have dried out much faster in the heat, leading to lower crop moisture. In Southwest Ohio, crop moisture is “excessively dry,” the second-worst possible rating.

“When the topsoil is so dry, it’s just baking in the sun and not able to take up water,” said Teter of the Ohio Farm Bureau.

But not only do high temperatures worsen drought conditions, dry weather leads to more heat, according to meteorologist Padgett, who estimates that local temperatures have been 3–4 degrees higher this summer because of the dry weather.

What’s needed are widespread rains, and rains which last for days, to recover many crops, experts said. Rains are especially critical in August, during a time known as “grain fill,” when the kernels of corn grow much larger.

Overall, small farmers and local gardeners have fared far better during this trying season. Though irrigation isn’t feasible in fields of hundreds or thousands of acres, it is possible on smaller plots.

At Jackson’s Farm on U.S. 68 in Xenia, a 50-acre farm that grows mostly fruits and vegetables and sells at the Yellow Springs Farmers Market, an irrigation pond has come in handy this season. Water is pumped to crops to keep them healthy and productive, according to farm worker Eric Sagasser. Christen has also had to step up watering at his 3-acre Community Supported Agriculture farm, though yields have still dropped because of the heat.

“We’ve been watering to keep the plants alive, but plants can be alive and not set fruit,” Christen explained. While a 50-pound green bean harvest is typical for this time of year, this week he only harvested seven pounds. And the second hay cutting has been far less than usual, meaning they may have to supplement the feed of their six pigs.

Most neighborhood garden plots in the village are doing fine, though gardeners have had to water their plants more often, according to garden coordinator Thor Bailey. The long heat spell may have had a bigger impact as it kept some gardeners from checking on, and caring for, their crops, he said. But one positive outcome is that drought has also encouraged the gardeners to pile mulch on their garden beds, which keeps more moisture in the soil, according to Thor.

Trees could be another casualty of the drought. Thor said that many area trees appear stressed. Signs of tree stress are a dull green color, wilting or curling leaves and leaves falling off. Villagers may consider irrigating their trees, which need about one inch of water per week, according to an Ohio State University Extension website. But the impact on trees might not show up until next year, when tree branches die back, Bailey said.

Though local plants and trees are clearly parched, the Village municipal water supply is so far unaffected by the lack of rainfall, according to Joe Bates, superintendent of Yellow Springs water and wastewater.

“We have excellent storage and have had no problem meeting demand,” Bates said. With Village water towers that can hold two million gallons — five times local use — and an underground aquifer so close to the Little Miami River to supply drinking water, Yellow Springs is in good shape, he said. When the Village faced an even worse drought in 1988, local water supply was never affected, Bates added.

A bigger threat to local drinking water supplies is an aging water plant, whose equipment could unexpectedly malfunction.

“We’re in pretty good shape, but we do have an older plant, which is always a problem, drought or no drought,” he said.

In a recent public water survey completed for the Ohio EPA, Bates reported that in case of a local water shortage, the Village would seek to establish an emergency water connection with another public water system, implement conservation measures and restrict certain kinds of water use. Conservation measures, though not currently being enforced by the Village, are always good practice, Bates said.

“It’s still good to conserve no matter what because we don’t know what will happen one month, two months, three months down the road,” he said, adding, “Everyone has a brown lawn — why do you have to be different?”

For water tables to really drop, a drought would have to last many years, according to the National Weather Service. And since 2011 was the second wettest on record for the Dayton area, long-term drought indicators for the area are positive. So even though only 15.49 inches of rain have fallen this year as of Monday (24.41 is the normal value), the drought’s impacts might be confined to this growing season.

But that’s little consolation to farmers like Corry and Haubner, who remain vulnerable to Mother Nature’s seasonal whims.

“It can be stressful but when you deal with [the weather] every day and every year, that’s just the nature of the industry,” Corry said. “When you get a drought like this, it’s unchartered territory.”

Even with the grim forecast of dry weather through October, Corry is not counting his corn out yet:

“You never know until you get grain in the bins.”