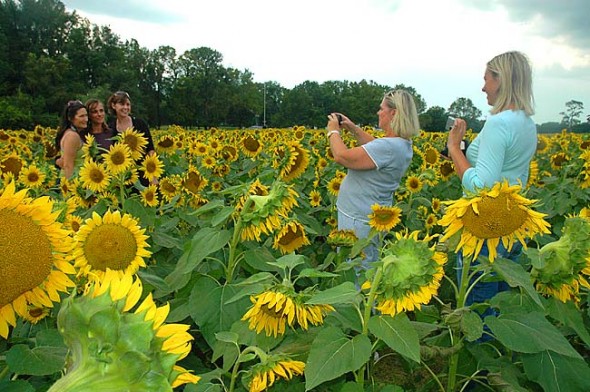 The sunflowers in the field just north of Yellow Springs are a big draw this time of year. Shown above are several women from Columbus who last year took time to photograph the flowers just after attending a yoga workshop in town.

The Tecumseh Land Trust, or TLT, is this year sponsoring its first ever Sunflower Photo Competition, seeking photos of sunflowers. The photos may be taken anywhere, as long as sunflowers are featured, and the deadline is Sept. 14. The winner will receive free tickets to the TLT Harvest Auction on Sept. 21, as well as other prizes. Submissions may be digital or hard copy. For more information on the contest, go to http://www.tecumsehlandtrust.org or call 767-9490.

However, photographers and all others who plan to visit the sunflower field just north of Yellow Springs on U.S. 68 are urged to take care turning into or out of the property, as well as when just driving by the field. This week two accidents were linked to sunflower-seekers. On Tuesday, Aug. 28, a driver who said he slowed to look at those taking photos in the sunflower field was rear-ended by a car that was then hit by a third car. Three passengers in the three cars involved in the accident were taken to Greene Memorial Hospital, though none of the injuries were serious, according to Yellow Springs Police.

The accident followed by two days a two-car accident at the same spot. At that time, the driver said he had also been looking at the sunflower field when he slowed down and was then struck from behind, according to local police.

So enjoy the sunflowers, but drive carefully!