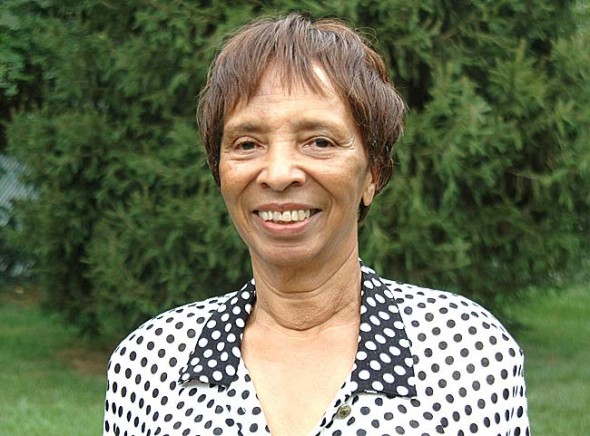 Alyce Earl Jenkins will be inducted into the Greene County Women’s Hall of Fame on Saturday, Sept. 22, at 11:30 a.m. at the Walnut Grove Country Club in Riverside. Jenkins, who has lived in Yellow Springs for 50 years, is being honored for work in the field of rehabilitation counseling, which is focused on helping those with physical and mental disabilities find work. Jenkins is the 26th villager to be inducted. (Photo by Megan Bachman)

Alyce Earl Jenkins may have stumbled by accident into the nascent field of rehabilitation counseling in the mid-1960s, but it was no accident how much this longtime villager contributed to the discipline over a distinguished four-decade career. For that work, which focused on helping those with physical and mental disabilities find work, she will be inducted into the Greene County Women’s Hall of Fame this month.

Jenkins is one of five area women scheduled for induction this year into the hall of fame, which has honored 159 women in its 30-year history, including 26 Yellow Springers.

As much as Jenkins helps her clients grow professionally, she also helps them grow personally, find their passions and learn how to deal with day-to-day challenges, she said. She has reams of stories of people she has counseled and the difference it has made, from a truck driver who learned to read in order to follow traffic signs to the adults and high school drop outs she taught job-seeking skills to. Jenkins set up the first rehabilitation counseling program at Greene County Career Center, and even during the decades she was a full-time professor at Wright State University, she volunteered at numerous agencies throughout the Dayton area.

“My students would have internships in the community, so it was incumbent upon me that if I was going to send students to be involved in agencies, I would be involved too,” Jenkins said.

During her teaching career, Jenkins was a source of inspiration for her students. Just ask Yellow Springs resident Bernadine Parks. Parks only went back to school to finish her undergraduate degree. But after she took Jenkins’ introductory rehabilitation counseling class, she found a professor that supported her like no other and a lifelong career calling.

“When I walked into class that day I never would have imagined the career I would have,” Parks said.
With Jenkins’ encouragement, Parks went on to get a graduate degree, after which she went into the field of mental health counseling, became an adjunct professor and today is the director of a grief counseling center at Hospice of Dayton.

“Alyce was a wonderful teacher, but even more than her skills in the classroom was her ability to be interested in students,” Parks said. “She had that ability to continue connections with students. She was instrumental not only for me but for everyone in the [rehabilitation counseling] program.”

But according to Parks, Jenkins’ most impressive accomplishments came in her advocacy for the field. The passing of a licensure law was “huge for the profession” according to Parks. Jenkins spent years pushing for the licensure, drafting the rules and regulations and sitting on the state licensure board.

Jenkins said she was surprised to receive notice of her impending induction into the hall of fame, having been retired since 2007. But she is no stranger to awards, having received them from both houses of the Ohio General Assembly, the Ohio Civil Rights Commission, the National Association for Multicultural Concerns and many other local, state and national groups.

After 40 years, Jenkins admits that she herself always had the skills to be a successful rehabilitation counselor.
“I’m a helper — a natural helper,” she said.