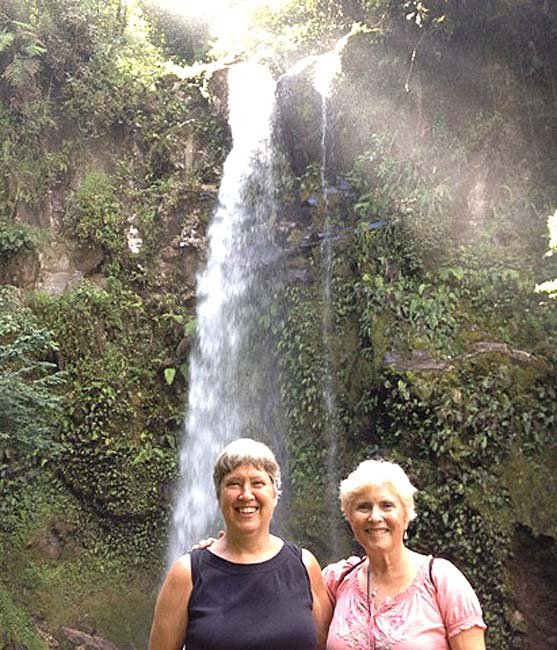 Kim Roman and Linda Sikes, pictured here in South America, were among a host villagers who sought adventure abroad over the summer.

Rwanda, Lithuania, Panama, China. What do these countries have in common? They’re all places Yellow Springers visited this past summer, many taking trips that combined vacation with work or educational opportunities. The stories they returned with provide tiny windows on the world outside the village.

McKinney Middle School language arts teacher Aurelia Blake traveled to Kigali, Rwanda to help start a creative writing contest similar to the Power of the Pen program that she leads with local students. Ultimately deciding against it because “creative writing is not common” in Rwanda, she ended up facilitating a three day workshop for teachers from all over the country. The workshop, sponsored by the government and organized by the literacy-promoting Isaro Foundation, brought together 35 teachers and trained them in how to teach creative writing. Blake reviewed the experience in an interview after her return.

“I learned that I speak too fast and have a funny accent,” she said, adding that the experience was extremely rewarding.

In addition to teacher training, Blake spent time at The National University of Rwanda, conducting creative writing workshops for middle schoolers and young women who were preparing to enter the university. One exercise combining the written word with visual expression involved participants using concrete and abstract words as prompts for photography. For the word “love,” Blake recalled, one boy photographed a man dressed in his Sunday best, sitting down and holding a piece of paper in his hand.

“It’s beautiful because you don’t know this man’s story. Is he holding a Dear John letter? Is he waiting for his love? You don’t know,” she said.

Since English was the students’ second language, the visual component of the assignments made the work more accessible and gave the students a place to start in expressing their creativity.

Project Jericho funded the trip, and this fall Blake will repeat the process with students in Project Jericho’s programs in Springfield. Her goal is to “make a book with photography and writing from both places…to see how youth see their world.” She plans to calls it “As Seen Under One Sun.”

To Blake, Rwanda is “a different reality” that she hopes to experience again — with a goal that is still literary, but slightly different.

“They have a gorgeous public library in Kigali that was built by the Rotary Club, but it’s empty,” she said. Blake hopes to organize a book drive in Yellow Springs and bring the collected books to Rwanda when she returns next summer.
Villager Steve Conn had a similar experience this summer when he went to China with his family to teach his version of American history to the Chinese academics who are teaching their version in the city of Xi’an. Staying at a university hotel and eating there three times a day gave both the family and the participants a unique opportunity for cultural exchange.

“We went to meals and chatted with participants in the program…We functioned as exhibit A for American studies,” said Conn’s wife Angela Brintlinger. “I had a lot of conversations, especially with women, about things like balancing work and home life.”

Their children Olivia and Zachary played soccer with graduate students who were excited about the chance to practice their English.

Built in the 13th and 14th centuries, the city itself was also a memorable cultural and historical experience, the family said. Xi’an is home to the famous Terra Cotta Warriors and was the eastern terminus of the Silk Route.

“The western edge points you out to the Silk Road, where all that trade was happening — to me that is thrilling,” Conn said. One of the family’s fondest memories is renting bikes and riding on top of the old city wall, 18 meters wide and 10 kilometers in circumference.

“In the dark it was beautiful with all the lights. It was just huge,” Brintlinger said.

“China has a lot of history, it’s not like the U.S.,” she said, illustrating the point with a conversation they had with fellow academic Liu Haiping. “He asked us: when you own a condo, who owns what’s underneath the building? I told him I don’t think it really matters. But in China it matters a lot because you could find a cache of something valuable down there.”

Learning about China’s more recent history through their conversations with Liu became one of their most meaningful experiences. A professor from the University of Nanjing and the “top American studies” expert in China, he shared stories about his life and his family’s life during the Cultural Revolution.

“He’s a remarkable human being with a remarkable story,” Conn said. “He’s very sophisticated and well-traveled, and he lost 10 years of his life because of the Cultural Revolution.”

Ultimately, it was being able to interact with locals and fellow academics that made the trip so valuable for the family. As Conn put it, “The tourist stuff is magnificent, but we had the opportunity to not be tourists.”

Interestingly, the converse was true for Kaethi Seidl and Bob Brecha, who took their two daughters on a trip to the Baltic States from late July to mid-August. For work and family reasons, the Brechas travel to Germany almost every summer. As their older daughter Regina noted, “Germany’s home — it’s not touristy.” Since the whole family speaks German, they found it novel to travel to countries “where there’s a language barrier” and do mostly tourist things like “sightseeing, churches and museums.” Indeed, the family chose the Baltic States largely on a whim after younger sister Francesca said she wanted to go to Lithuania because she didn’t know anything about it. Along the way they also visited Poland, Latvia, Estonia and Finland, spending time both in major cities and in the surrounding countryside in each place.

Discussing their favorite places, Regina mentioned a hostel in Tallinn, Estonia, which she described as “Yellow Springs condensed into one building.” She enjoyed the friendly people, “the common room” where everyone gathered once in the morning and again in the evening to play music together. Francesca thought Warsaw “was really cool because they rebuilt their whole city after World War II,” she said.

The family also remarked on the differences between the places. “In my mind I had them all lumped together, but each city had its own specialty,” Brecha said. Regina noticed, for instance, that in Tallinn, everyone was young, in their 20s and 30s. In Latvia it was mostly an older crowd of people, and Lithuania it was younger people again, she said.
Likewise, in Tallinn Brecha spotted a great number of Russian tourists, which reminded him of the affect politics can have on people’s lives.

“These are countries that are sandwiched between Russia and the former Austro-Hungarian Empire. They have been used as pawns for centuries,” he said.

While not always obvious, the unique and tragic history of these countries was evident in small ways throughout their trip. After visiting the Occupation Museum in Riga, Latvia, the family stayed at an historic countryside inn whose guestbook described the Nazi occupation chronicled in the museum, Seidl said. Similarly, they visited a modern looking church in Kaunus, which had been used as a Nazi storeroom during World War II, was later turned into a radio factory, and then with independence, had become a church again.

Meanwhile, in a totally different and somewhat warmer hemisphere, Linda Sykes and Kim Rohmann visited Panama, where they planned to live with a host family, take Spanish classes and snorkel on the beaches. Their first destination was Bocas del Toro, on the country’s Caribbean coast, which they found to be “extremely hot” and the beaches not particularly nice. So they quickly relocated to the Spanish school’s other site in Boquete, a quieter and cooler town located in the mountain region.

In Boquete, where the weather was “great,” they enjoyed horseback riding, shopping, river rafting and the kindness of the local people, according to Rohmann. Boquete is also a popular retirement destination for North Americans, and thus has many of the amenities North Americans are used to. “They have recycling, a beautiful library,” Sikes said. “When you go there, you feel right at home.”

Indeed, while both Sikes and Rohmann struggled with what Sikes termed “the challenge of Bocas,” on the whole they felt safe and comfortable in the country. Like Blake in Rwanda, the women noticed the vibrant street culture, where you can see “people out on the streets with their families at 10 p.m.,” and cross-country bus-travel is safe and relatively comfortable. Despite the initial culture shock, Rohmann and Sikes described the Panamanians as “generous, open, [and] amazingly kind.” And when asked what they enjoyed most about their trip, both women had the same answer: the people.

* Anisa Kline is a freelance writer for the Yellow Springs News.