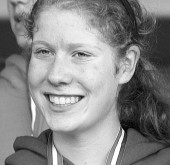 Yellow Springs High School cross-country star Lois Miller will toe the line at the state finals for the second time on Saturday. The senior qualified for states after a fifth-place run at regionals last week. As a team, the Lady Bulldogs took 13th. (Submitted photo by Vince Peters)

For YSHS runner Lois Miller, the only thing sweeter than qualifying for the state cross-country race for the second time in her high school career was having her team behind her. In fact, en route to a fifth-place regional run on Saturday, that extra encouragement may have made all the difference.

“Mentally it definitely helped me,” Miller said this week. “I’ve always had support, but it’s not the same as having your team at the starting line.”

Miller, a senior, has competed at the regional meet in downtown Troy for all four years, but has always been alone. This year, her teammates ran with her after all five ran personal bests at districts to qualify as team out of districts for only the second time in YSHS school history.

And while the girls cross-country team didn’t make it out of regionals (they finished 13th), they’ll be cheering Miller on this Saturday at National Trail Raceway in Hebron as she hopes to improve upon her 43rd-place finish at the 2010 state finals. The race starts at 1:30 p.m.

The second-fastest runner in YSHS history, Miller blasted off from the starting line at the regional finals. According to Coach Vince Peters in a recent email:

“She drafted like a NASCAR champ, as the lead pack flew thru the first mile in 5:56. Then she strategically controlled the pace of her chase pack, surging and dropping one challenger after another as she sped past two miles in 12:28. Never further back than sixth herself, she averaged 6:21 per mile for the 3.1-mile long race. She made her final push starting from 600 meters out, dropping Jasmine Smith from West Liberty Salem, to claim fifth.”

Miller’s time of 19:44 was short of her personal record of 19:33, which she earned the previous week at districts. But on a slow course in windy conditions, it was a good time, Peters said. Following an intense workout the previous Monday, Miller said she felt like she was in the best shape of her life.

“The workout helped me with my confidence and made me feel good,” Miller said. “I just felt really good from the beginning [of the race.]”

For finishing among the top eight at regionals out of 129 runners, Miller received the all-regional first team award. Though as a team, the girls didn’t move onto states, as individual competitors they ended their season with strong runs.

After Miller’s final high school race, she hopes to run at whatever Division III college she chooses, even though academics is her top priority, she said. This year, Miller received the prestigious academic all-Ohio cross-country award for her outstanding performance in the classroom, an award that Peters said “goes hand-in-hand with her accomplishments in the muddier environments she competes in.”

But Miller learned more from running than how to go fast, she said. She learned discipline and dedication, because the sport requires a lot. For her success Miller gives some credit to her supportive teammates, to boys cross-country runner Connor Gravley-Novello, who challenged Miller on their 10-mile runs every Sunday to Clifton and back, and to Peters, her running coach since age 8, when she joined the Miami Valley Track Club.

“It’s been great having a coach to discuss everything with — from training to race strategy,” she said. Peters was equally complimentary of Miller’s skills as a runner.

“You have to have the physical, but more important is what goes on between the ears,” Peter said. “She has that mental strength…and confidence in herself to be able to handle the pressure of the race.”

As Miller looks back on her season, it’s the team memories she’ll cherish most, she said, especially the celebration after the district team results were announced.

“Usually after the race I can relax, but it was nerve-wracking [at districts],” Miller said. “It just made it all better that we made it together.”