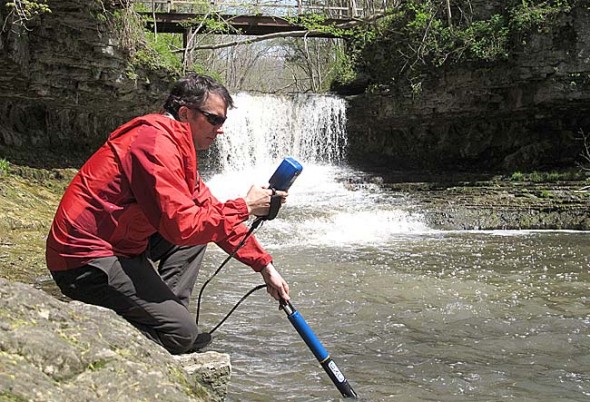 In its first year as a division of Xylem, YSI launched Exo, a new line of advanced water quality monitoring sonde systems. Here Rob Ellison, Director of Research and Development at YSI, tests an Exo sonde along Birch Creek in the Glen Helen Nature Preserve. YSI has continued double-digit growth since being acquired last year. (Submitted photo courtesy of Xylem)

One year later, YSI is set to grow

Both YSI and Xylem are benefiting from last year’s acquisition, according to YSI General Manager and Vice President of Analytics Ron Geis. And the plan for the village’s largest employer is to continue to grow locally, he said.

“YSI is one of the more profitable businesses in Xylem,” Geis said in a recent interview. “They are our biggest business in Analytics, which is the growth engine for Xylem.”

In September 2011, ITT Corporation purchased YSI, a 63-year-old local company that develops and manufactures sensors, instruments, software and data collection platforms for environmental water quality monitoring. The purchase price was $310 million. Later in 2011 ITT spun off its water-related businesses into a new company, Xylem (XYL), now a publicly traded firm. After the acquisition, Rick Omlor, former president and CEO of YSI, stayed on as the company’s executive advisor.

In 2011, YSI’s annual revenue rose to $110 million, a 10 percent increase over the previous year, with the growth trend continuing into 2012, according to Geis. Locally, 21 jobs were added over the year in operations, product development, management and sales to bring the number of local employees to 189. Worldwide, YSI now has 406 employees, including 60 new hires in the last year. YSI remains the village’s largest employer and tax contributor. According to Regional Income Tax Agency figures, YSI contributed about $215,000 to Village coffers in 2010.

Some of YSI’s annual growth came from consolidating operations from other facilities. As an example, a wastewater treatment sensor now ships from Yellow Springs instead of Texas and accounting personnel moved from another Xylem location to Yellow Springs. Another growth engine has been so-called “synergy products,” according to Geis. For instance, water distribution systems manufactured by another Xylem brand are now equipped with YSI instrumentation.

“It was a push to get them out,” Geis said. “I think that what Xylem did was focus on these products. YSI was known to take on too much. We set some priorities.”

“We’ve traditionally had a very big appetite,” said Abel, YSI’s director of quality and corporate responsibility. “It’s been difficult to get done everything we wanted to … With a public company you have to meet your commitments and move faster.”

In addition to driving progress in R&D, Xylem is investing in Yellow Springs’ campus with the goal of increasing local manufacturing and service operations, according to Geis. New equipment, updated safety measures, a new roof and new AC units were installed at the manufacturing facility and new space cleared to make way for expansion. And with 13 acres of property, Xylem has plenty of room to grow locally, Geis said.

“Once the capacity is filled, we do have land and we prefer to stay on this land,” Geis said. “It’s convenient to have it all in one place and not lots of satellites.”

For the foreseeable future, Xylem is looking at Yellow Springs as a center of growth as it makes new acquisitions and consolidates operations over the next year.

“YSI was a large business in North America that we could leverage,” Geis said. “There’s no benefit, there’s no value, in leaving. If anything, there would be more consolidation here.”

So far, the transition for both Xylem and YSI has been smooth. Xylem has benefited from a strong local talent pool at YSI, and has in turn promoted many local people, according to Geis. A handful of YSI employees retired over the course of the year, but not more than were expected, Abel said. For others, work continues much as before, albeit with more corporate reporting and policies, she added.

Part of the reason for the easy transition, according to Geis, is that both companies are customer-focused, and both value honesty and integrity and address problems as soon as they arise.

“It really was a good fit and it still is today,” Geis said. “It’s surprising how aligned we were. It’s really easy to merge a business with the commonalities.”

Abel said she recognized an immediate similarity with some of the other dozen or so businesses that make up Xylem’s Analytics division. Many had a similar history to YSI in that they were founded by a group of “engineers tinkering,” she said.

The biggest change, to Abel, is that the company is no longer employee-owned, so employees benefit differently from its growth. She added that because employee-owned stock ownership benefits accrued from the sale to ITT can only be reaped by current employees when they retire (or else face tax penalties), many employees have an incentive to keep working at the company. But overall, working for Xylem is not too different from her time at YSI.

“The YSI culture is pretty entrenched here,” Abel said. “And Xylem is focused on water, not making widgets or military products.”

In September, Xylem was added to the Dow Jones Sustainability Index, one of 140 North American companies recognized as sustainability-driven.

Another consequence of acquisition, the YSI Foundation was closed several months ago and its assets were spent down. Started in 1990, the YSI Foundation gave out $2.8 million to Yellow Springs and Dayton area organizations through 2010 and matched an additional $73,000 in employee giving since 2004.

Xylem has its own company foundation, Watermark, which matches employee gifts, but its main focus has been global water issues. Watermark has made grants to international nonprofits aimed at providing safe water and hygiene education, securing water in vulnerable areas, and delivering water in the aftermath of emergencies. In 2010, ITT pledged $10.5 million over three years to serve one million people in the world with such services.

But Geis said because employees like to see donations spent in their local community, Xylem is looking for ways to support local efforts. Earlier this month, Xylem gave an unspecified amount of money to University of Dayton’s Rivers Institute Rivermobile, a mobile classroom with interactive, museum-quality exhibits that will be used starting next month at area schools and community events to educate children and adults about the history of Dayton’s rivers and aquifers. Xylem also donated some of its water quality testing equipment to the project.

“We’ll continue to donate — that’s part of our company,” Geis said, adding that some successor to the YSI Foundation will eventually be created so local giving can take place in communities where Xylem branches are located.

There are plenty of reasons for optimism at Xylem/YSI, even though several trends in 2012 may have slowed growth, according to Geis. One reason was Europe’s dismal economy, since European sales account for about 25 percent of Xylem’s revenue.

“We’re having a good year, and if the economy in Europe doesn’t slow down, we could have a banner year,” Geis said.

The U.S. election also curbed sales, since many government agencies — prime YSI customers — held off equipment purchasing until their future budgets became clear. But agency customers, such as the United States Geological Survey, will have more money next year to spend on new equipment, such as that manufactured by YSI in Yellow Springs, Geis said. Plus spending on research equipment in colleges and universities is up, particularly in the growing Asia-Pacific market.

Finally, Geis said, the massive East Coast flooding caused by hurricane Sandy could provide a business opportunity for Xylem and YSI. Xylem’s large-scale water pumps, which are not manufactured locally, were used extensively after the storm. In fact, some 200 Xylem pumps were on the ground within a day of the hurricane’s landfall.

But YSI instruments could also be used in clean-up efforts. With the capacity to measure raw sewage and other toxins that may have been released, YSI could see some growth in 2012 related to the storm, Geis said.

And looking beyond 2012, Geis sees more growth for YSI with its strong local capacity. “YSI’s a stable, growing business that’s here to stay,” he said.