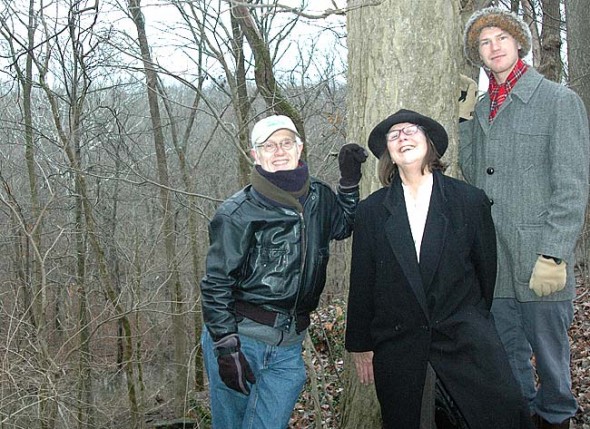 Glen Helen will be celebrated through poetry this Friday, Dec. 14, at 7 p.m. at the Vernet Ecological Center, formerly the Glen Helen Building. Shown above are organizers Ed Davis, left, and Krista Magaw of Tecumseh Land Trust, with Jack Whitacre, who will all read poetry, along with other local and regional writers. The event is sponsored by TLT and the Glen. (Photo by Diane Chiddister(

Glen both source, subject for poets

The majestic trees of the Pine Forest. Water falling over rocks at the Cascades. The exquisite beauty of the season’s first snow in the woods.

All of these experiences of the natural world are, for those who live in the village, right down the street at Glen Helen. For many Yellow Springers, the Glen is a destination for beauty and inspiration, a natural stress reliever and, for some, a place to experience the sacred.

This Friday, Dec. 14, the Yellow Springs community is invited to celebrate the Glen at “In the Spirit of the Glen: A night of nature-inspired poetry.” The event, co-sponsored by the Glen and the Tecumseh Land Trust, or TLT, will take place from 7–9 p.m. at the Vernet Ecological Center (formerly the Glen Helen Building). Eighteen poets will share their original nature-inspired work, and an open mic will also be available. Following the poetry, wine and cheese will be served.

The purpose of the free event is not so much to raise funds as to raise friends, according to TLT Executive Director Krista Magaw.

“It’s a good time for people to get together who share a love of the land,” Magaw said, stating that she hopes that some of those attending might become TLT members.

Organizers also hope to offer a peaceful alternative to the holiday season’s frenzy, according to local writer and organizer Ed Davis.

Both Davis and Magaw are regular walkers in the Glen who love poetry, and it seemed timely, during the holiday season, to offer others a chance to share both their love of words and of the woods, Davis said.

A former assistant director of the Antioch Writers’ Workshop, Davis knows a host of poets. When he began rounding them up, not a single one of the 18 poets he called said no.

Due to their number, the evening’s poets will be limited to between three and five minutes, in order to leave time for an open mic for audience members to join in.

“It will be a buffet rather than a four-course feast,” Davis said of the event’s bite-size poetry presentations.

It’s appropriate that the local land trust will sponsor the event, as that organization is currently deeply involved in helping to ensure the Glen stays green for generations to come. While many have assumed over the years that Glen Helen had been protected from development by conservation easements, that was not the case. So for the past several years, TLT has worked with Glen leaders to do so.

“It’s by far the biggest and most complicated thing we’ve ever done,” Magaw said.

All that work is beginning to pay off. This month, TLT hopes to close on funding for the first part of a two-step process to preserve the Glen. The total cost for the preservation effort is about $2 million, which is expected to come from a variety of state, federal and regional sources.

The first stage of the preservation effort, which will preserve the Glen’s waterways, would be financed by $1.2 million from the Environmental Protection Agency, or EPA, along with funds from the Dayton Foundation, the Village of Yellow Springs and the Upper River Fund.

TLT will find out this month if it has won funding for the final phase of the effort, from the state Clean Ohio program and the federal Farm and Ranch Protection. If the hoped-for funds don’t come through, TLT will seek other sources of funding, Magaw said.

The Glen and TLT have worked for six years on the preservation effort, according to Glen Director Nick Boutis, who said that efforts by Glen and Antioch College leaders to protect the Glen began with Arthur Morgan in the 1920s.

“We are inches away from establishing a leap forward in that 90-year fight,” Boutis said.