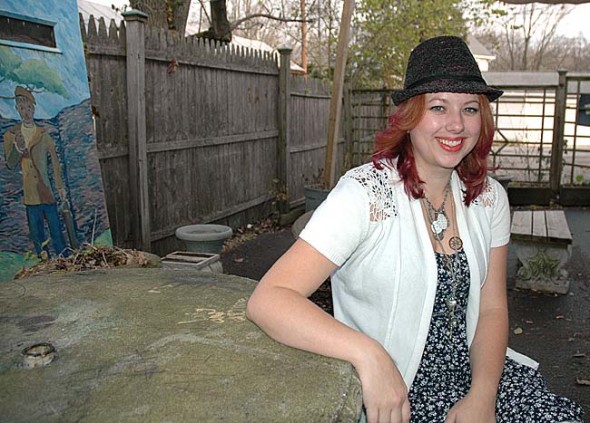 Area author S.J. Drum published four works of fiction this year, including Surprisingly Supernatural, a paranormal romance set in Yellow Springs. Drum is pictured at Dino’s Cappuccinos, where she pens most of her books. (Photo by Megan Bachman)

New resident Eliana Mathews realized that there’s something strange about the town of Yellow Springs and its residents. From the clan of pixies taking up residence in her backyard to the sexy male elves prowling the Glen Helen Nature Preserve, to the House of Hallow-wood, a mystical downtown shop that’s really a front for the sale of spells and curses, Yellow Springs turned out to be full of mystery.

Area author S.J. Drum re-imagines the village as a place for the paranormal in her book, Surprisingly Supernatural, published by Eternal Press in August. And the depiction is not too far off, says the 29-year-old author, who spent her childhood expecting to see faeries on hikes in the Glen.

“I think there is something extra there if you are open to it,” Drum said of local forest’s magic. “I took so many hikes as a child waiting for something to happen.”

Not only was Yellow Springs the inspiration for Drum’s work of fiction, she also penned most of the novel in Dino’s Cappuccino’s, fueled by countless cups of chai tea latte with extra sugar. Drum, who grew up in Rosewood, Ohio, lives on Fairfield Pike just north of the village with her husband, Beau, and two children, Owen, 3, and Avaleigh, 1.

Surprisingly Supernatural, an urban fantasy/paranormal romance about a new girl in town thrust into a supernatural war, is available in paperback locally at Dark Star Books, from Barnes & Noble, Amazon and as an e-book online. Early sales of the book have been strong, according to Drum, who sold out in three hours at this fall’s Yellow Springs Street Fair.

Drum is also raking in royalties from three other books published this year. In February, her debut novel, Life Beyond Yesterday, was published by Eternal under the pen name Clara LaVeaux. That story explores how a young widow with a seven-year-old child re-invents her life. Then, in July, came Sinful Southern Ink, published by Ellora’s Cave, the first in a series of erotic fiction about the liaisons of a group of tattooed young adults in the Louisiana heat. And in October a work of LGBT young adult fiction, Caged in Myth, was self-published under the pen name J.T. Fairfield. Steeped in mythology and set in a magical zoo in the Bayoo, Caged in Myth is a coming of age story about a young boy struggling with his sexuality.

Her books may run the genre gamut, but all of them delve into difficult subject matter, Drum said.

“I don’t shy away from touchy subjects,” Drum said. “There’s a lot about overcoming abuse — physical and mental — and a lot of romance.” And, in the case of Sinful Southern Ink, some kinky sex, she added.

Though most of her material is imagined, Drum does also draw somewhat from her own life experience. Eliana, the lead character in Surprisingly Supernatural, has a hair-coloring habit she gets from Drum, and Eliana’s mother turns out to have a similar Wiccan streak as her real life mom. Drum said she has been in an abusive relationship; she did work at a Baton Rouge zoo as an elephant handler, and she’s been tattooed and pierced since age 16.

“I was a wild child and had lots of adventures,” Drum admits. “I’ve lived a lot of lives.” Drum also worked on a dive boat in the Virgin Islands for a time, and, when she was 19, sold everything she owned on eBay — including, lastly, the very laptop she used to post her life’s possessions online.

The stories themselves come from an overactive imagination, a reader’s mind (she reads about 200 books per year), and insomnia, Drum said. As a mother of two young children, a lot of ideas, and writing, takes place at night.

“All [of the stories] usually come to me before I fall asleep,” Drum explained. “I see it in my head like a movie projector and hours will go by.”

Drum said knew she would be a writer from the second grade. She was assigned to write a simple story, but ended up writing, illustrating and binding an entire book, with “a convoluted plot about a promiscuous lady cat, a randy tom cat, and the offspring they sired,” in Drum’s words. As a teenager she wrote the typical “terrible, emo poetry” she said, and as an adult, found herself with a drawer filled with unfinished stories. It wasn’t until Drum, pregnant with her first child, was on prescribed bed rest that she spent three solid months filling in and finishing her story scraps. Looking back, the evolution seems natural, she said.

While the writing came easy, getting her work published proved to be harder. She worked closely with a critique partner who helped hone her material. Then it took six months and more than 100 query letters before she got her first deal. Now that she’s published, the pressure is on to improve on her catalogue.

“I used to think the hardest part would be getting negative feedback, but now I think it’s to write better than you’ve already done,” Drum said.

That work has already begun. Drum is working on three sequels — Sinful Southern Hero, Caged in Myth: Book 2 and Supernaturally Challenged. The next installment of the local paranormal book starts off during the annual Yellow Springs Zombie Walk, which Eliana mistakes as a real zombie apocalypse. The three books will be published in 2013.

As a successful author, Drum has learned what sells — “people want to read about people having sex,” she said — but she also wants to write books that make a difference.

“We all have altruistic plans,” Drum said. “Sinful Southern Ink is what sells, but I try to balance it with things I feel passionate about.”

As for the sudden appearance of real faeries and elves in the Glen, Drum is not counting anything out.

“I think it could happen,” she said. “I wouldn’t be completely surprised.”