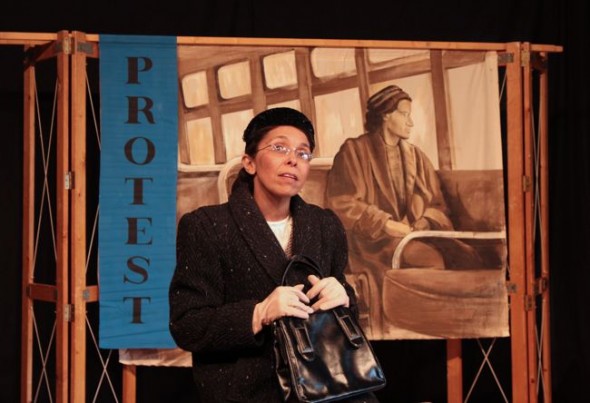 What most people know about Rosa Parks begins and ends with what happened on a Montgomery, Ala., bus in December 1955, when Parks refused to give up her seat to a white passenger.

Few know that Parks was already a civil rights activist, that later in life she worked on the staff of a Michigan congressman, and that her widely-reported response when asked to relinquish her bus seat — “feet tired” — is a myth.

Mills Lawn music teacher Jo Frannye Reichert, who will play the role of Parks in an upcoming theatrical production, hopes the show clears some of these misconceptions and gives the audience a greater appreciation for Parks’ life.

“A lot of people think of Rosa Parks in conjunction with Martin Luther King, Jr. and don’t know a lot about Rosa Parks herself,” said Reichert. “When we were kids, we were told that she said ‘feet tired,’ but she was a very proper, well-spoken and educated person. I think she told them that she would not move.”

Reichert plays Rosa Parks in “Walk On: The Rosa Parks Story,” a traveling musical developed by Mad River Theater Works. The company begins a six-week national tour with a performance at Mills Lawn Elementary School at 7 p.m. Saturday, Jan. 12. Tickets are $5 per person and $20 for families, with part of the proceeds benefitting art programming at Mills Lawn.

“For those who already know the story this will fill information in, for those who don’t it’s a great introduction,” Reichert said.

See the Jan. 10 issue of the News for the full story.