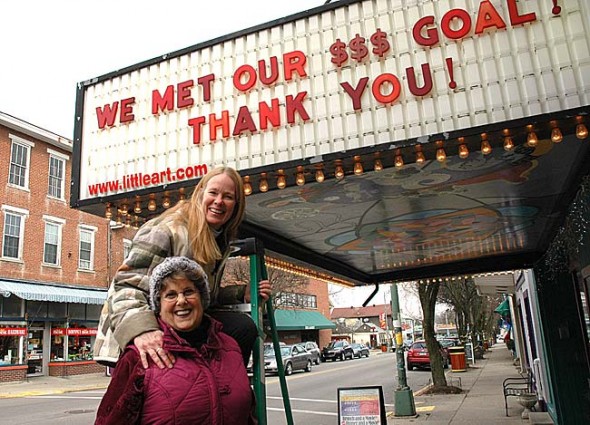 The local community helped the Little Art Theatre to reach its fundraising goal of $475,000 to complete a total renovation of the facility. Little Art Director Jenny Cowperthwaite and capital campaign co-chair Dorothy Scott spelled out the good news on the marquee this week. (Photo by Lauren Heaton)

Village pulls through for Little Art

When the red seats that currently occupy the Little Art Theatre were first installed in 1987, they were already 12 years old. That was new compared to the projector from the 1940s and the pre-1929 concrete floor. But cosmetics never fazed the local theater, which has carried on for nearly 90 years because stewards such as Jenny Cowperthwaite have been willing to “make do” with the mimimum necessary to keep bringing back the art films no one else was showing.

So it comes as quite a shock to Cowperthwaite that she won’t have to make do anymore. This year’s Campaign to Renovate the Little Art Theatre reached its goal of $475,000 to bring the theater into the 21st century. Hundreds of donors from the village as well as the region contributed to the biggest fundraising event in the theater’s history. For Cowperthwaite, who first started working at the theater when she was 15, the support is hardly believable.

“When you’ve nurtured something this disabled for so long — I call this my disabled child — it really is a dream come true,” she said this week. “Actually this kind of renovation is beyond my dreams…but the Little Art has long deserved this.”

The community apparently felt the same way, according to campaign co-chairs Kipra Heermann and Dorothy O. Scott. Though the economy is still tough and the fundraising goal was a big one, Scott never doubted that the campaign would reach its goal.

“For one thing, after fundraising here for 40 years I know, this town is inordinately generous,” she said. “In addition, the Little Art has always been central geographically and culturally, and the Little Art has always paid attention to being relevant,” she said, referring to the community events and programs the theater hosts, in addition to matinee and children’s screenings.

And behind the scenes making the decisions to use the theater for the community’s interests has been Cowperthwaite.

“This has probably been the most gratifying fundraising effort I’ve ever been involved with because people genuinely love this theater, and, they love Jenny,” Heermann said. “One person I spoke to said, ‘You know, I like the theater, but I’m giving you this money because Jenny is such a good person.’”

Cowperthwaite has been part of the theater for nearly 40 years, initially as an employee, then starting in 1986 as the manager. She worked with previous owner the Art Theater Guild until Antioch College bought the business in 1987, followed by John Saari, who sold it to her in 1997.

Cowperthwaite doesn’t think of herself as a movie buff, but she has been handling the minutiae of the daily operations for so long, she just has a feel for what will work with her audiences and what won’t — especially regarding the films she chooses. She still uses reviews such as the New York Times, Variety and Indiewire, but mostly she relies on gut feeling.

“Part of it is all the time I’ve been here — you know. You have a sense of what’s going to do well,” she said.

And the community has come to trust that sense.

“People sometimes come to the Little Art asking, ‘So what’s playing tonight? Is it a comedy? Is it a drama? Are there subtitles,’” she said. “It’s sort of like going to your favorite restaurant — you eat whatever they’re serving.”

But the Little Art was no exception when theaters around the country started falling on hard times. And after several years of pondering the arguments for and against becoming a nonprofit, in 2009 Cowperthwaite took the leap of becoming a 501(c)(3). She hasn’t regretted it for a moment.

Membership doubled to about 550 members, and fundraising also doubled to about $50,000 a year, thanks to the theater’s working board of trustees. And now, the capital campaign promises to breathe new life into the charming, old theater.

The campaign received an initial $30,000 from the Yellow Springs Community Foundation, followed by $250,000 from the Morgan Family Foundation, $75,000 from Friends of the Little Art, and another $65,000 from the board, plus contributions from all the staff members. The Yellow Springs and surrounding community donated the rest, including purchasing all 130 seats, the stage, the lobby, the restrooms, and more, to be named after the donors (including the popcorn machine, named after Carol Cottom and Bruce Bradtmiller, and the ticket booth, named after Cowperthwaite’s father, Gordon Cowperthwaite.)

The entire renovation, scheduled to start in early spring and take about two to three months, will include the switch from 35-millimeter film prints to digital projection, the fate which precipitated the whole project. Other major upgrades will include all new seating and a floor with a steeper rake, for all the short people who have suffered decades of neck craning. The theater will also get new handicapped accessible restrooms and other infrastructure, as well as a Dolby digital sound system.

“What we really want to say is ‘thank you!’” Heermann said. “And from Dorothy O., who said to me, ‘I love this community — it always comes through!’”

2 Responses to “Village pulls through for Little Art”