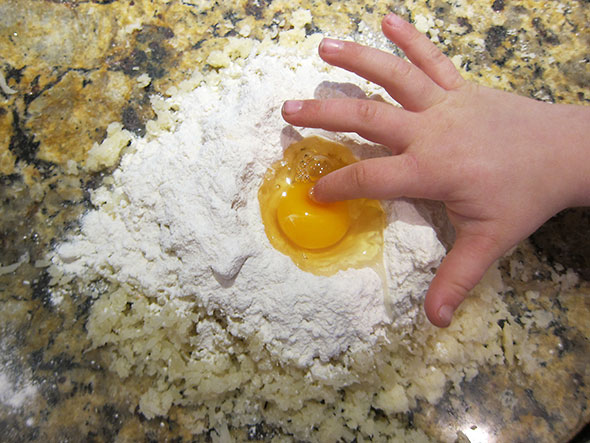 Ice. The one sure thing to close school. Growing up, my school district dragged us over snow banks and sand bags doggedly persevering to hold classes through heavy snows and high water even as the other school districts in the five counties around us kept their kids at home. But the unforgiving perils of an ice storm were always respected. 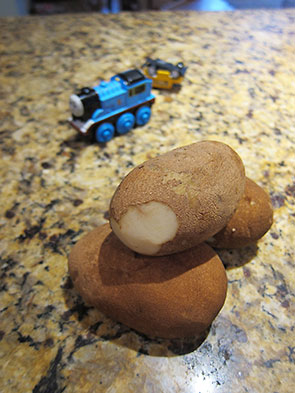 Friday morning’s ice storm was a mixed blessing. Allied by the announced delays and closures, our family enjoyed a much appreciated lie-in until 8am. However, once up, our movements were frustrated by the hazard outside. After a hearty breakfast prepared by all hands, I pressed my husband to take our all-wheel drive vehicle to work. His departure left the rest of us cabin bound until the roads improved.

Really, I hadn’t planned to venture out. I had hoped to use the morning to catch up around the house. The thing is that I have yet to negotiate much progress on the family to-do list when the kids are unexpectedly at home. They are explorers, and my chores are nothing to their schemes of discovery. Sorting laundry has long lost its appeal; the vacuum’s draw is waning. Often, the best I can do is to hatch something completely new and enthrall them into accompanying me. Today’s adventure was kitchen patrol. 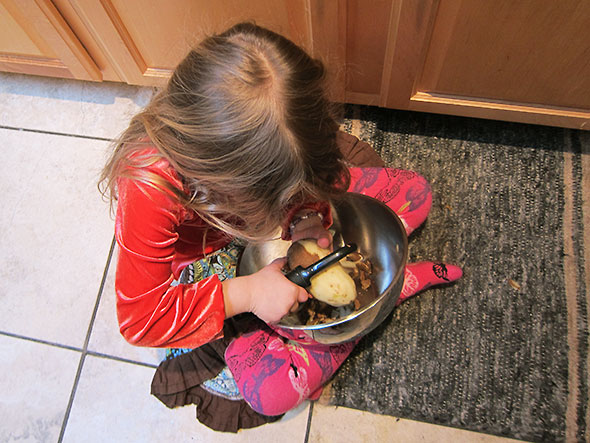 I had managed to tick off a few to-do’s when the kids caught me checking the New York Times webpage. They literally piled over my shoulder as I read the highlights. I clicked off the page’s video feed in a foolish attempt to distract them and got drawn in myself. The lead video featured Mark Bittman. Lately, he has been demonstrating simple recipes in Haven’s Kitchen, a recreational cooking school in New York City (Aside: Yellow Springs needs a school like this!). Friday’s video was a special treat: Mario Batali joined him to demonstrate a recipe for gnocchi with butternut squash. I broke into our stash of summer potatoes directly. 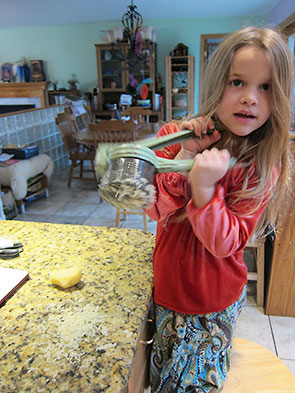 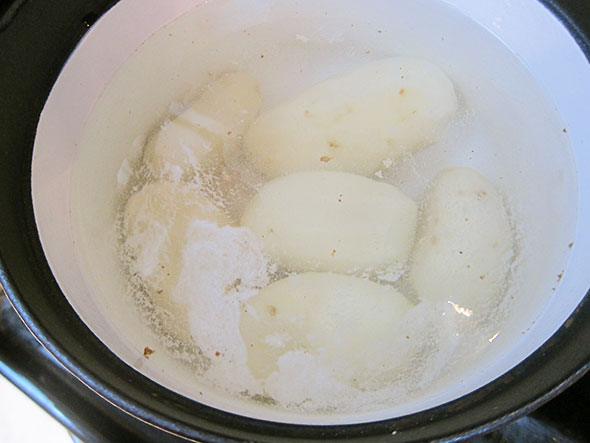 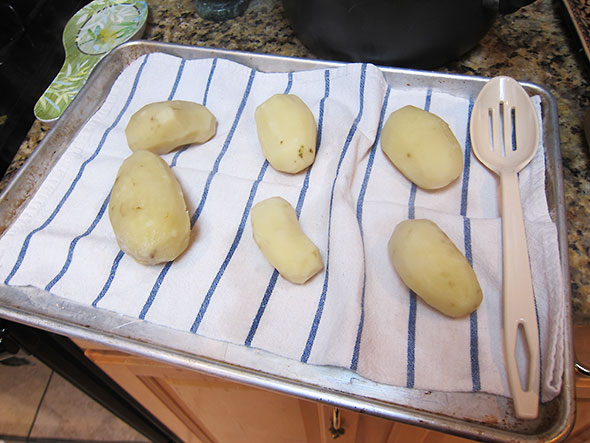 We watched the video a couple of times through to appreciate Mr Batali’s strategy. He managed two pots like child’s play but I had heard enough about gnocchi to know this was no small undertaking. Mr Batali put a pound of well boiled, starchy potatoes—still warm from boiling—through a ricer. He formed the riced potato in a volcano-like well, coated it with about 100 grams of flour, and cracked an egg into the center. With practiced wisdom of his grandmother to know what was “just enough”, he formed a light pasta dough for the gnocchi. 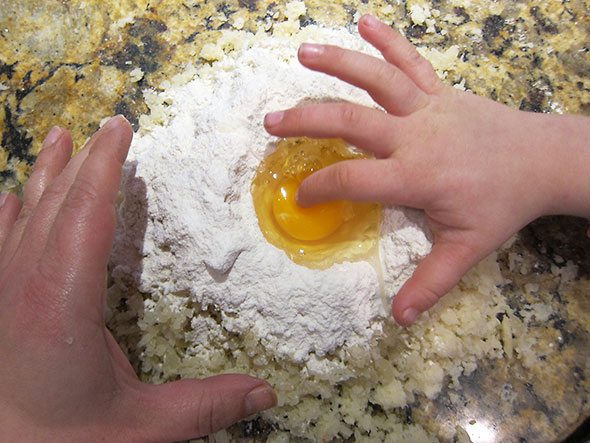 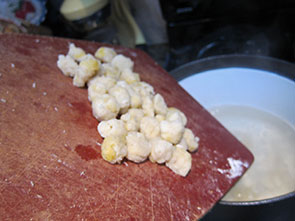 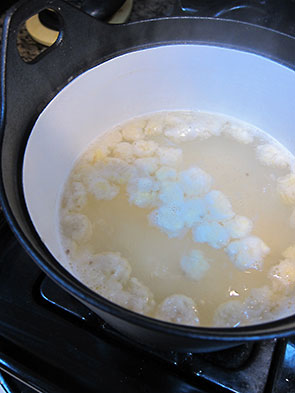 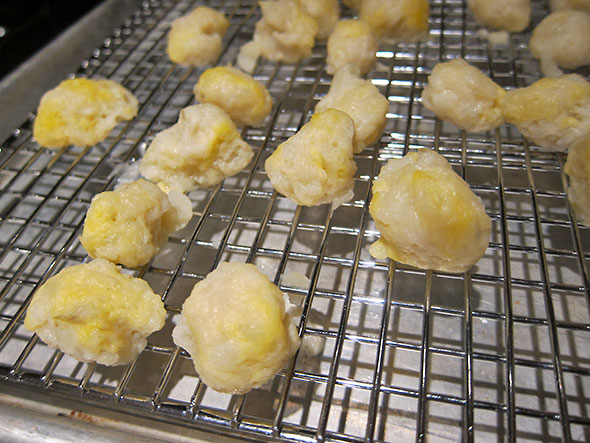 Briefly setting aside the dough to rest, Mr Batali pan-fried diced squash in olive oil adding a jalapeno and onion as the diced squash crisped and caramelized. Returning to the pasta dough, he formed snakelike tubes and cut the gnocchi cubes so that each was a couple of centimeters in thickness. Next, he slipped the gnocchi cubes in boiling water to cook. Here, he paused to spoon off pasta water to add to the frying squash; the pasta water added to the super hot pan slowed down the frying squash and spreading vegetable’s caramelized flavor more evenly. I loved the play between the two pots on the stove and wondered at the timing of it all. In the dish’s final stages, Mr Batali added tomato sauce to the squash and gently folded in the gnocchi at the last. Dividing up the pasta on two plates he sprinkled parmesan cheese on top, splashed the plates with olive oil, and together he and Mr Bittman tasted the dish with apparent satisfaction.

Unmistakably inspired, my daughter and I set about peeling our potatoes. This occasion marked the first time I entrusted her with a kitchen sharp—the time-honored kitchen patrol standard potato peeler. I gave her the biggest potato, and she determinedly set about shaving its skin while I tackled the others. She did a fine job in this new skill and soon we set our naked potatoes in a pot to boil. I set about skinning the squash while my daughter spread out its seeds to dry for planting in March. She restarted the New York Times video and vetoed the hot jalapeno pepper, a decision I could easily respect.

The potatoes came out to cool for handling, and soon we started the ricing. A couple of years ago, I had found an old ricer at a local antique shop. It did ok service, but a pound of tubers is a lot to go through and I hadn’t boiled them quite soft enough. We tried grating the potato with a zester and were happier with the results, but it proved a timely process either way. Having no place to go, we stuck to it.

Forming gnocchi is a family process. I’d say four people is about perfect. Two to rice the potatoes, two to roll the dough and cut the cubes. The latter job is the perfect for a five year old. As soon as we had our first batch of gnocchi dumplings ready to boil, I reused the water we used to boil the potatoes thinking it might make them tastier. We followed Mr Batali lead ducking them in the water, giving them a stir, and then forgetting about them as we turned to the pan fry. 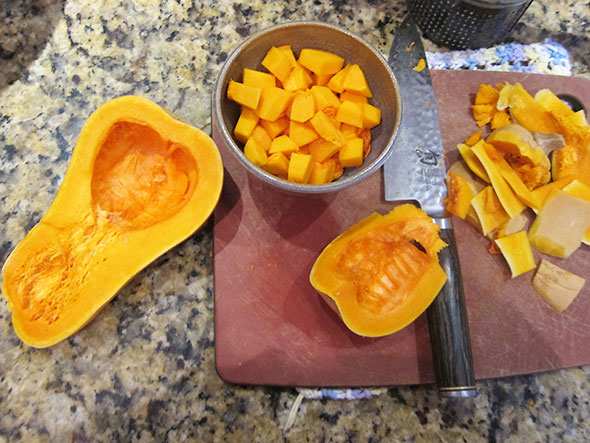 The squash we cut open gave us a pleasant surprise with its bright orange flesh. I choose walnut oil for the pan fry and started the squash cubes in a hot skillet set to medium flame. I added a pinch of powdered garlic and skipped the jalapeño and onions all together acknowledging that the children would indeed appreciate a simpler dish. 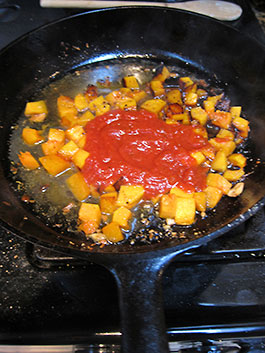 Along with the pound of potatoes, I used one squash and about one cup of sauce. Then I made the dish in three batches so not to not crowd the vegetables in the pan. The dish was really marvelous. We made enough for four servings. We ate some immediately and some later in the day. The excellent flavors improved further with the extra time for mingling. 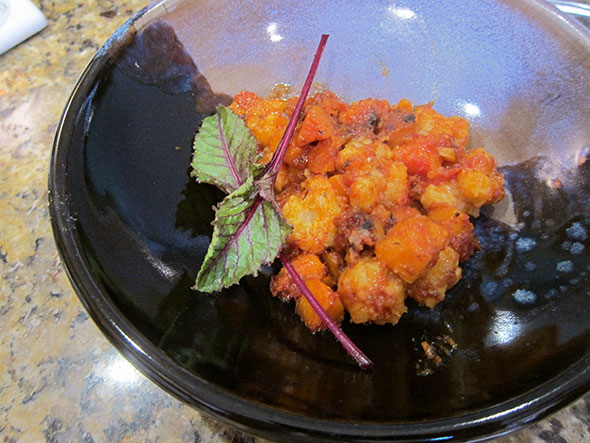 Mark Bittman provides more ideas for gnocchi and alternative methods for preparing the potatoes in his article Gnocchi of a Different Color. I suspect next I’ll be adding beet and carrot for a colorful medley of gnocchi clouds. My children will definitely enjoy rolling out the different colored pasta like play dough…especially if the weather keeps us close inside.