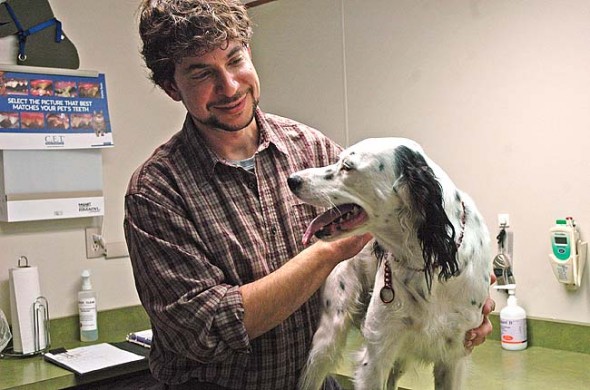 From cats to cows, answers on air

For three years now, Brett Ellis has been hosting a call-in radio show on Joe Mullins’ radio station, WBZI. During his 15-minute segment on Thursdays, Brett “the Vet” answers people’s questions and concerns about their domestic animals, be they pets or livestock.

In a segment last December, one person was concerned about his dog, which had begun having seizures. Another was considering giving a pet as a Christmas gift. Brett’s advice? Don’t do it. A new animal is always stressful and that stress, together with the activity and demands of the holiday season, can be an overwhelming combination.

In a recent interview, Ellis shared that, in addition to answering people’s specific questions, he tries to provide helpful general information, talk about current issues in veterinary medicine and focus on how we relate to animals in our lives.

“Animals are part of our lives now” he said, and so problems with pets “are frequently related to stress and changes in the household.”

This connection can make the show difficult, since he is unable to see the pet or gain more background information before providing assistance. That’s why, among other things, Ellis always recommends that people take their animals to the vet, regardless of the opinion he gives on the show.

While the distance of a radio show can be challenging, it also has its advantages.

“It is easier to do radio than television,” Ellis observed, recalling a particularly challenging TV appearance when he tried to perform acupuncture on an uncooperative dog.

Radio also gives him greater freedom of movement, allowing him to call in from wherever he happens to be working. Indeed, such mobility is one of the things he enjoys most about the project. Describing his most memorable and favorite moments on the show, he said, “Sometimes I’m working on cows and I call in on the cell phone…It’s a beautiful day and you can hear the cows mooing in the background.”

Ellis also appreciates the opportunity to work with Joe Mullins and his unique brand of radio. Independently owned, the station still does live commercials and can be considered “old school” in the best sense of the term. Described on its website as “home of the finest home-cooked country music,” the station has widespread appeal and draws listeners from all over the world. According to Ellis, listeners from Ireland have even visited Ohio with the express purpose of going on a kind of self-guided “Joe Mullins’ Ohio” tour.

“I like being a part of this small-town thing,” and tying people back to their agricultural roots, Ellis said, and the audience of Mullins’ radio station is particularly appreciative of the kind of information he has to offer.

Indeed, it was his experience with livestock that created the idea for the show in the first place. After being featured on the station as a kind of guest expert during an outbreak of Mad Cow Disease, Mullins approached Ellis about starting a call-in vet show. For Ellis, who appreciates both the human and non-human connections he makes through his work, the show seemed like a natural fit.

“I enjoy the science [of veterinary medicine] but I also enjoy seeing how people interact with their animals and the radio show helps extend that,” he said.

Although Ellis is an associate in the practice founded by his father, it seems unlikely the family profession will be continued by the next generation. After watching her father deliver twin calves in a parking lot, during which he had to pull the baby out by chain and ended up covered in birthing fluids and matter, Ellis’s daughter told him, “I never want to do what you do.”

But she could eventually change her mind, since becoming a vet was not Ellis’s intention either. He was originally more drawn to curing human ills and had plans to become a doctor. But he changed plans after he worked as a phlebotomist and realized he didn’t like spending so much time in the hospital. A family friend told him, “If you really want to practice medicine, you should be a vet,” and Ellis hasn’t looked back since.

“I like the variation” he said of his profession. Working with large, livestock animals gives him plenty of time outside, while small, domestic pets are generally easier to manage, and being in the office can be a welcome relief from the elements. The range of veterinary work also provides him with a variety of rewards. Working with large animals can bring with it an adrenaline rush and an unpredictability that requires improvisation. “Once I did a c-section on a cow at the bottom of a cliff,” Ellis said.“The cow must have gotten scared and run over the cliff, so I had to climb down to the bottom…We used ropes to hoist the calf up.”

Although less dramatic, the emotional support pets provide their owners can be equally memorable.

“When a little old lady who has no family brings her cat in, and the cat loves her unconditionally, it’s what’s keeping her going.” Ellis shared when reflecting on what he finds most meaningful about his work.

In addition to the radio show, Ellis has expanded the variety of his work by becoming trained in animal acupuncture. Ellis, who sees acupuncture as complementary to western medicine, added it to his repertoire in 2004 and now uses it to treat problems such as pain, mobility and some diseases. He finds it is particularly helpful for older dogs, since it can frequently be used to improve their mobility, and thus their quality of life, in the last stage of their lives.

While in some ways being a vet is more challenging than he expected it to be, it’s that challenge that Ellis finds most fulfilling. “When you realize how important people’s pets are to them, you have to look at each animal as an individual case and treat the animal how the owner would want them to be treated. It gets more rewarding when you put yourself in their position,” he said.