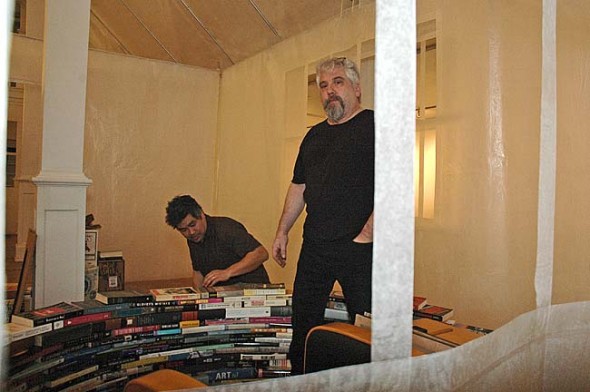 Kurt Miyazaki and Michael Casselli installed their work in the new exhibit, Appetite: An American Pastime, at the Herndon Gallery this week. The show, which includes four additional artists, opens this weekend and continues through May 24. (photo by Lauren Heaton)

Our big appetite for consumption

We humans hunger for many things, from food to knowledge to comfort. As Americans, by virtue of economics, we have been feeding those hungers since the post-war era. What effect that sustained and frenzied consumption has had on cultures across the globe is the subject of the new art exhibit, Appetite: An American Pastime, going up at Herndon Gallery this week.

The six-inch wide white paper walls and pitched A-line roof of the typical suburban home that has taken over the gallery space speak immediately of American comfort. And the house makes a cozy refuge for the four rooms inside, each created by the four other artists participating in the show. One room includes a towering wall of books, while another includes a table set for six with rotating images of food projecting onto the plates from above. A barbeque in the AstroTurf “yard” smells of burritos cooking to the familiar sounds of zippers and potato chip crunching.

Michael Casselli doesn’t want to say too much about the installation he conceived of and is curating. But the fragility of the two miles of wax paper he used to build his iconic American home says a lot about the capitalism under which millions like it flourished — until recently.

“Americans have always pushed the ethic of hard work, never taking breaks, starting with the assembly line of the automotive industry,” Casselli said. “It was supposed to be the American Dream, but now a lot of people work hard and they’ve lost everything.”

Such commentary can be gleaned through the multi-sensory experience of the exhibit, which opens this weekend. An opening reception takes place Saturday, March 16, 7–9 p.m. at the gallery in South Hall on the Antioch College campus. On Sunday, March 17, at 1 p.m. participating artist Stefanie Koseff will present Lunch on the Lawn, a conversation and lunch event.

Casselli is an adjunct faculty member of media arts at Antioch College who credits his political orientation to his years as a student at Antioch in the 1980s. He chose to curate this exhibit democratically, bringing in artists he met working as a theater technician in New York and Chicago, as well as political/cultural theorist Kurt Miyazaki, who owns the Emporium.

For his part in Appetite, Miyazaki focuses on his own unbridled consumption of knowledge and books. The wall of books within which he will be nearly imprisoned for periods throughout the duration of the two-month exhibition is a symbol of the tension between “the immense pleasure” he gets from reading and the consumption aspect of his book collecting. Miyazaki has also observed that since quitting his job as a professor of political science at Wittenberg in order to run a cafe (which he fell in love with largely because it’s a good place to read), the ultimate injustice is that he can never find time to sit down and enjoy it. Now he plans to feed his desire to read as part of the exhibit.

“It’s very selfish, but I’m really happy to have a chance to do this,” he said.

Artist Stefanie Koseff is a Brooklyn-based video artist who has worked with installation, theater and performance projects. The table she set for Appetite invites viewers to sit down to a meal projected onto one of six plates with the images rotating from above. The images of a steak or roast chicken, a spoonful of oatmeal, some dry cornmeal, or sometimes nothing at all, illustrate the extreme discrepancies in the world’s food consumption.

“Each plate is served, and then the video-plates spin…and the viewer is served something else: you never know what you’re going to get,” Koseff wrote in an email this week. “In my mind, it was a kind of Russian roulette. I was lucky enough to be born in a place to a family where we had enough to eat, for example, but there are so many who aren’t so lucky.”

Eric Dyer and Maggie Hoffman are co-artistic directors of Radiohole, the performance collaborative that created “Inflatable Frankenstein,” which ran at The Kitchen in January and will premiere in Europe at Festival Temps d’Images in Paris this year. For Appetite, they created an interactive dining experience inviting visitors to feed a hollow dummy and observe the (un)digestion process.

Media artist Raul Vincent Enriquez wanted to say even less than Casselli about his installation for Appetite, but revealed that his work “amplifies the power dynamics of hospitality. Since I can remember, I’ve always found the role of either host or guest to be a deliciously awkward situation.”
Now that the American cultural and economic model is being adopted by many others around the world, rampant consumption is not just an American phenomenon, Casselli said. While other countries’ workers are working harder and harder to produce cheaper goods, it’s not just things that are becoming disposable, but the workers themselves, he said. According to Miyazaki, it boils down to resources.

“We’re not saying it, but it’s the logic of capitalism,” he said. “And the key to desire and consumption is it’s never fulfilled.”

Appetite will continue through May 24. Gallery hours are Tuesday through Saturday, 1–4 p.m. For more information, contact Dennie Eagleson, creative director of the Herndon Gallery at deagleson@antiochcollege.org or 937-768-6462.