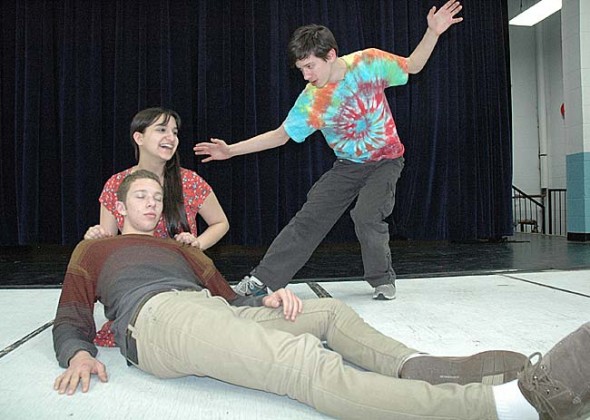 Yellow Springs High School/McKinney School will present its spring musical, “Once on this Island,” on April 12–14, and 19–21 at the Mills Lawn gym. Shown above are, from left in back, Anna Knippling and Joshua Seitz, and in front, Ben Green. (Photo by Anisa Kline)

If you’re interested in the Caribbean, calypso music or star-crossed lovers, this year’s high school musical should appeal to you. The musical, Once on this Island, will be performed at Mills Lawn on April 12, 13, 14, 19, 20 and 21, with Friday and Saturday showings beginning at 8 p.m. and Sunday matinees at 2 p.m.

Set in the Caribbean and drawing on the history of Haiti, the story concerns two lovers divided by questions of race and class. After Haiti’s revolution in 1791, the French colonizers were thrown out, leaving behind what director Phyllis Allen calls “long, simmering prejudices between the French descendants and the poorer black population.”

“It’s basically a happy tragedy,” said Ben Green, who plays the romantic lead and describes his character, Daniel, as a “rich mulatto man [who’s] a good guy and…loves the girl, but isn’t really willing to change” for her.

The “girl” is the peasant Ti Moune, played by sophomore Anna Knippling.

“She’s a young girl, who’s determined and believes that the gods have led her to this boy…The story is basically her struggle against everyone,” said Knippling in a recent pre-rehearsal interview.

Ti Moune is both aided and thwarted in her struggle by a variety of gods, including Asaka (Ali Solomon), the earth mother, and Papa Ge (Josh Seitz), the god of death. Like Green, who feels that “I’m basically myself as a character,” Solomon was drawn to Asaka because “I felt like of all the characters in the play, she’s the most like me. She’s sassy, but motherly at the same time.”

For Seitz, Papa Ge’s character was attractive because he is something of a trickster.

“He has a personality different from most deaths. I think of him laughing it all out as opposed to being an oppressive death,” he said.

For director Phyllis Allen, the play as a whole appeals to her.

“I’ve loved the play since I saw it 15 years ago,” she said. “I’ve thought about it for 15 years…It’s a very touching musical.”

It was her enthusiasm that got the Yellow Springs High School Theater Arts Board interested as well.

“When we hire the director, they bring a proposal of what they really want to do,” said board member Danielle Norman. “Phyllis sold us on Once on this Island because it sounded like the costumes would be very colorful, there was lots of dancing and it was an ensemble show with interesting roles.”

After contracting with Allen, Norman and other board members learned that the high school had in fact performed Once on this Island in the late ‘90s.

“Most of us hadn’t heard of the show, so it was surprising to hear that we’d actually done it in Yellow Springs,” said Norman. The addition of Valerie Blackwell-Truitt as the dance director has provided some continuity between the two productions, since she also choreographed the first Yellow Springs performance.

“It’s amazing that we have Valerie as our choreographer,” said Allen.

Although Blackwell-Truitt worked with the first production, the choreography for this year’s play has been much more extensive.

“This year is a lot more challenging because I’m choreographing the entire thing,” she said. “It’s a huge responsibility but one that I have definitely welcomed and appreciated.”

Because choreographing for such a large group can be difficult, she has frequently had to experiment during the rehearsals, noting that she is “very proud of the students and their patience” with the sometimes lengthy process such an undertaking requires. Characterizing the musical as “awesome,” Blackwell-Truitt has also enjoyed listening to the students perform the songs.

“I don’t think they realized how beautiful they sounded,” she said of a particular rehearsal.

First performed on Broadway in 1990, the cast has traditionally been all African-American — something which initially made the high schoolers a little uncomfortable.

“It was hard going into it at first,” said Solomon. “The show is about our race and ethnicity — I think we were all a little confused.”

With the drama of the story revolving around the racial and class legacy that slavery and colonialism left imprinted on Haitian society, such challenges are impossible to avoid and have been faced by various casts of the play over the years. Indeed, according to Green, “there are optional lines” that can be used which shift the emphasis away from race if the cast is not predominately African-American. “But we’re not doing that. We’re sticking close to being Caribbean storytellers on this island,” added Allen.

Allen has, however, adapted some of the roles to accommodate the large cast size.

“In the original play, there are 11 storytellers” she explained. “I’ve changed it to 22.”

Such adaptions can be necessary, since the high school musical strives to be very inclusive.

“Typically, the fall play is a smaller production reserved for high schoolers only, and the spring is a whole school musical depending on the interest of the kids and the needs of the cast,” said Norman. Solomon summed up the process by saying, “Generally, if you audition, you get in.”

This is Allen’s first time directing in town and, in her opinion, such an approach is somewhat unique to Yellow Springs.

“In Yellow Springs, the process is very important, how you learn to become a performer. Process is important as well as product,” she said. Allen also noted that the high school does not currently offer a theater class, which means students learn about acting almost exclusively through the school’s theater productions and community organizations like the Yellow Springs Kids Playhouse. Nonetheless, “The guest directing has worked because the kids have a variety of talents and discipline. They know what it takes to put on a play.”

What it takes, according to both Allen and Norman, is an interested student body combined with a dedicated corps of parents, volunteers and local professionals who offer their services. With 24 actors and seven students on tech crew, the musical also requires costumes, by Ali Thomas and Judy Parker, concessions, rehearsal space and coordination, a pit orchestra, music direction by Cindy Lincoln and dance direction by Blackwell-Truitt — not to mention supportive and interested audiences.

The board is hosting its annual curtain warmer fundraiser, with tickets at $25, at the Arthur Morgan House before the first Saturday performance, which will include beverages, sparkling wine, hors d’oeuvres and desserts, as well as admission with preferred reserved seating.

For Norman, it’s a way to show appreciation for “ the community members who keep coming even though their kids are long gone — something which is unusual, I think. And they’re not sitting through it, they’re coming to enjoy it.”

“It’s a huge undertaking, but it’s worth it, because it has the potential to bring the community together,” she said.