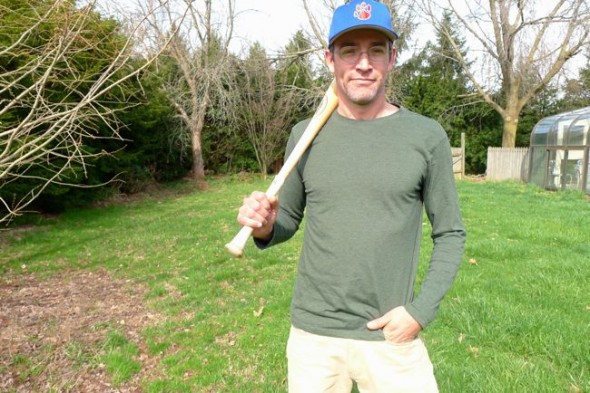 Ben Cooper, a local carpenter and musician, is the new head coach of the YSHS baseball team. (Photo by Megan Bachman)

New coach steps up to the plate

Local carpenter and musician Ben Cooper stepped up to the plate to coach this year’s Yellow Springs High School baseball team. He hopes to lead the 12-player team through its first complete season in three years.

“That’s the trouble they had with the baseball team — interest wanes, especially toward the end of the school year,” Cooper said this week. “We try to make practice fun and we keep it light. We aren’t out there making them do wind sprints, working them to the bone. There are lots of scrimmages, batting practice …”

Last year the YSHS baseball team went 0–9 before canceling the rest of its games. In 2011 the team got one game in, a 30–1 loss, after which academic ineligibility, injury and low turnout ended its season. The year prior the team went 1–15 with the help of two female players to fill out the roster. You have to go back to 2008 to find a winning Bulldogs baseball team. That year the team finished 9–8.

Cooper plans to turn around the ailing program by finishing this season, developing local talent and raising money to pay for equipment and, eventually, a new ball field, he said. To donate to the team, which hopes to offset equipment costs and fund a team outing to a Cincinnati Reds game, email Cooperbencooper619@yahoo.com.

With an eye towards the future, Cooper is focusing on this team and its talent. Team members include Jones, the catcher, pitchers Jonathan Clark, Ethan DeWine and Liam Weigand, outfielders Sam Holman-Smith, Sam Crawford and Thomas Amrhein, and Chase Barclay, Ian Chick, JT Clark, Pedro Cussioli, Yaakov Himes, Fielding Lewis and Isaiah Taylor. Cooper is impressed with all of them.

“Every player has progressed, every player has done a great job and progressed by leaps and bounds throughout the season,” Cooper said. And he said he couldn’t have done it without assistant coach Matthew Collins and pitching coach Mitch Clark.

The Bulldogs play their next game at Ponitz Career Center at 5 p.m. on Tuesday, April 23.

Read the full story in the April 18 issue of the News.