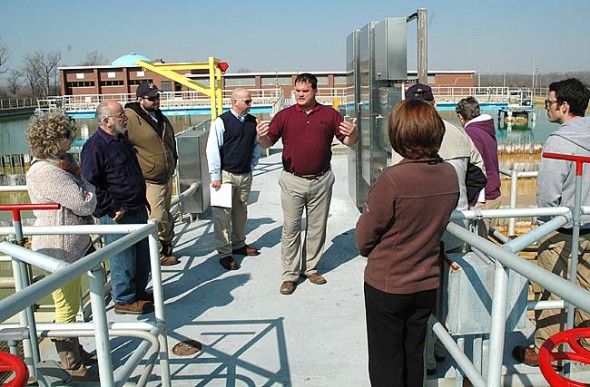 Springfield Water Treatment Plant Superintendent Allen Jones explained the treatment process that yields high quality, softened water at the plant on a recent tour by Yellow Springs residents, local elected officials and Village water treatment plant staff. Village Council plans to decide by the end of May whether to purchase water from Springfield or upgrade its own facilities. Photo by Megan Bachman

This is the first in a series of two articles comparing Yellow Springs and Springfield water.

Like Yellow Springs, Springfield was named by early settlers for its abundant underground water resources, which on the surface manifest as gushing springs. The groundwater aquifers tapped for drinking water by both communities remain highly productive today. But the similarities end there. Yellow Springs suffers from naturally hard water (high in mineral content), driving many villagers to use home water softeners. Springfield, meanwhile, softens its water at the plant. Springfield’s well field sits among working farms, houses, roads and manufacturing facilities, while the village’s wells are recharged from a mostly natural area that includes Glen Helen and John Bryan State Park. And Springfield’s water is currently about half the cost of Yellow Springs water.

On tours of both plants last week, Village officials and residents weighed the relative merits of Springfield and Yellow Springs water ahead of a Village Council decision to rehabilitate its deteriorating water plant, replace it, or source water from Springfield. Council member Karen Wintrow, for one, was impressed by the facility and had her fears of water contamination allayed.
“My feeling is that we don’t have any environmental concerns with Springfield water,” she said. “To me it’s going to come down to rates and the debate about local control.”

However, after the tour resident Vickie Hennessy wasn’t convinced that Springfield water is as safe as Yellow Springs water.

“I was surprised that they knew as little as they did about contamination threats,” Hennessy said. “They have a nice facility, I just don’t think that they are that aware of what’s out there.”

Quality and cost
“Excellent water quality at a good price” is how Leslie McDermott, assistant to the Springfield city manager, described the city’s water. Customers are happy with their product, according to City Service Director Chris Moore, who said he has yet to field a water quality complaint in his eight years and hasn’t heard of anyone in Springfield using either a water softener or whole house filter. Reiter Dairy even bottles and sells Springfield tap water without additional treatment.

In a 2013 Oakwood study of 66 area jurisdictions, Springfield had the third lowest water rate, at $60.15 for a three-month period. Yellow Springs ranked 45th at $117.20. One way costs have been kept down at the Springfield plant has been through preventative maintenance, according to Moore. Built in 1958, the plant appears to be in remarkable condition. Its water filters, which are meticulously cleaned, are original to the plant (Yellow Springs’ original water filters from 1962 were replaced after 37 years). And Springfield’s sweltering filter room has been kept clean by constantly running dehumidifiers, preventing the black mold that coats the ceiling of the Yellow Springs plant.

“Our water is only as good as the plant looks,” Moore said. “If it’s not pleasing to the eyes the water’s not going to taste good.”

Recent technology upgrades at the Springfield plant have included potent new water pumps capable of delivering 10,000 gallons/minute and an emergency backup 2-megawatt diesel generator, which will be built later this year at a cost of $800,000.

The difference in scale between the Springfield and Yellow Springs water plants is dramatic and may account for some of the cost difference. The Springfield plant provides some 27,000 households and businesses with 12 million gallons of water each day, 30 times more than Yellow Springs, which serves 1,800 connections with about 400,000 gallons/day. Annually, Springfield spends $2.9 million to operate its plant while the Village’s budget is $200,000. Springfield’s plant was built to accommodate up to 36 million gallons of water per day, so it would not have a problem adding Yellow Springs to its capacity, according to Springfield Water Plant Superintendent Allen Jones.

Springfield has quoted the Village a rate of $1.86 for 1,000 gallons of water, which in one scenario it would deliver to the southern edge of Clark County line along U.S. 68 via a newly-constructed pipe. (Springfield already delivers water as far south as Airpark Ohio industrial park on U.S. 68.) The Village would then pay for the rest of the pipe and deliver the water to Yellow Springs customers with an added surcharge, keeping its own distribution and billing systems. While the Village is currently working on full financial estimates, the cost of purchasing water from Springfield is still projected to be cheaper than treating it in Yellow Springs, according to Village Manager Laura Curliss.

“It simply comes down to how few people are supporting our water plant,” Curliss said this week, adding that costs are especially high here because there are few industrial users. “[Springfield] is likely the option that keeps the rates stable and low over the longest period of time.”

Lime-softened water
The biggest difference between the two plants is that Springfield dedicates a major portion of its plant to soften its hard water. Otherwise, both Springfield and Yellow Springs chlorinate their water to disinfect it and use a similar sand filter media to remove impurities. Neither adds fluoride. The Village uses aeration to get rid of iron, while Springfield uses a ferric solution for the same purpose (Springfield’s ferric solution additionally removes manganese, the culprit behind brown water episodes in the Village water system.)

Springfield uses a lime softening process that is a more ecologically-sound and healthy alternative to conventional sodium ion softening since it doesn’t increase the water’s salt content, according to Jones. Much of the lime used in the process can be recycled, he said. Dayton, Troy and Sydney use a similar method.

“Lime softening is a tried and true way to soften the water,” Jones said. “You don’t have the salt brine going to the wastewater plant and we’re not adding sodium to the water.”

Springfield brings its water down from a hardness of about 350 milligrams per liter to 150 mg/l, a level that keep pipes from caking with limescale and doesn’t corrode its distribution pipes. By comparison, household water softeners bring the hardness down to 0 mg/l because they don’t have to worry about long-distance water transport. But the level of softness in Springfield is sufficient, Jones said. He doesn’t know anyone with a water softener in Springfield and has not heard of any customers having to change elements in their hot water heaters from limescale build-up. By comparison, Yellow Springs’ unsoftened water has a hardness around 500 mg/l, encrusting pipes and appliances throughout town.

Lime softening, however, may not be practical on a small scale, since it is relatively expensive and produces a lot of solid waste, according to Village Water and Wastewater Plant Superintendent Joe Bates, who is currently researching water softening options.

Pollution-prone or protected?
But there is some concern that before the water enters the Springfield water treatment plant it may pick up industrial contaminants that the system cannot remedy. That’s because the Springfield well field is in a far more developed area than the Yellow Springs well field and its wells are within a few hundred feet of a degraded Mad River. A former salt pile that leaked sodium chloride into the groundwater, a landfill of barrels filled with toxic chemicals and an underground plume of volatile organic chemicals from a Urbana manufacturing facility also threaten Springfield’s water, according to village resident Vickie Hennessy.

Comparatively, the Yellow Springs water supply is relatively protected by natural areas to the north and is situated along the ecologically-healthy Little Miami River. As a watershed, the Upper Little Miami River is relatively pristine. The Little Miami was designated as Ohio’s first National Wild and Scenic River in 1968 and as the state’s first State Scenic River in 1969 because of its value to wildlife and recreation. Many creeks in the Yellow Springs area and segments of the Little Miami have been designed “exceptional warm-water habitat,” the Ohio Environmetnal Protection Agency’s highest aquatic life designation with 97 percent of the main stem achieving full or partial attainment of healthy warm-water habitat goals. Meanwhile, the Mad River is at about 79 percent attainment. The Mad River watershed includes nine mobile home parks, 10 industrial facilities and eight wastewater treatment plants, which are all permitted to release a certain amount of untreated water into the Mad River. The Yellow Springs and Clifton wastewater treatment plants and a confined animal feedlot operation are the only concerns upstream of the Yellow Springs well field.

Springfield uses 12 water wells, all around 100 feet deep, roughly the same depth as the Village’s four principal wells. But according to local hydrogeologist Peter Townsend, the geology in the Village’s well field is superior since there’s a layer of glacial till in the aquifer that filters some pollutants. Comparatively, Springfield’s aquifer is continuous sand and gravel and is generally less protected, he said. Citing a U.S. Geological Survey study, Townsend said that about 60 to 80 percent of Springfield’s well field is recharged by a carbonate aquifer that provides far less filtration and can transfer water from long distances in cracks.

Because of the aquifer’s qualities and the fact that Springfield’s water wells are located within a few hundred feet of the Mad River in its immediate floodplain, Townsend suspects that there is some surface water infiltrating the groundwater. This raises contamination concerns, since surface water is far more polluted.

According to a 2005 report from the Clark County Soil and Water Conservation District, “Lower Mad River Watershed Protection Project,” ground and surface water interact in the Springfield well field due to large amounts of sand and gravel deposits. The report additionally states that sewer overflows, stormwater run-off, urban construction and poorly-managed septic systems challenge the quality of water in the area of the Springfield well field. Since the Villages of Enon, Tremont City and Donnelsville are condensed unsewered communities, they “contribute greatly to the degradation of the Mad River,” according to the report. There are an estimated 15,000 on-site septic systems releasing discharge into the Lower Mad River.

Springfield officials argue that the well field area is protected from pollution. The City of Springfield owns a 684-acre tract that encompasses nearly the entire one-year time-of-travel zone to the well field. Most of that land is rented to farmers with restrictions on the amount of chemical pesticides and fertilizers they can apply. The actual water treatment plant site was designated a
Groundwater Guardian Green Site by the Groundwater Foundation in 2013 for good environmental stewardship, including a five-acre tract of native grass. Within the five-year time-of-travel are residential and industrial areas, U.S. 68 and State Route 72 and a railroad line. But with a Wellhead Protection Plan in place governing what can and cannot happen in the area and extensive water monitoring, Springfield officials are not concerned about contaminants entering their drinking water, they said.

“Everything that I see and know is in place, I have no concerns about the future of the water,” Jones said. “Springfield is taking a proactive approach.”

An article next week will cover point-source pollution threats to Springfield water, including the Tremont City Barrel Fill landfill, the Convey-It salt pile and the Grimes Aerospace VOC plume.