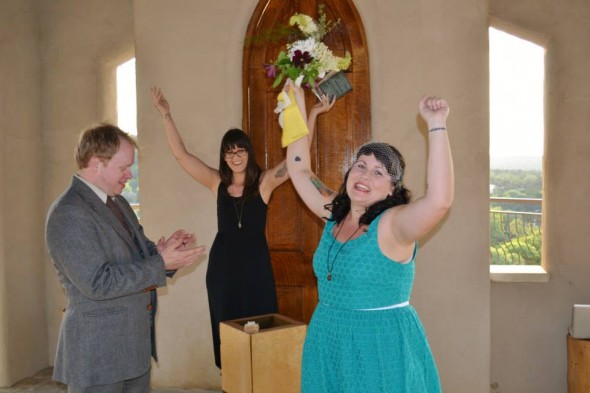 Anthony, Cherie and me, livin' it up.

Several weeks ago, I went to a screening of Le Fabeleux Destin d’Amelie Poulain, or Amelie, as it’s known, at the Little Art’s “Last Reel Film Festival.” Amelie is a film I loved unconditionally in college, watching it over and over on a discarded Blockbuster VHS that still had the “Be Kind, Rewind” sticker attached. Everything about the film still enchants me: the saturated color, Yann Tiersen’s accordion-laden soundtrack, the eccentric hijinks of every character, the title heroine’s pixie bangs.

After the screening, as I walked home along Winter Street, I called my best friend and former college roommate, Cherie, with whom I had watched the movie time and again when we lived together. I reminisced with her about one of my favorite parts. Amelie, having found the man of her proverbial dreams, leaves him a series of photos of herself in a mask and cape, which spell out the words, “Souhaitez vous me recontrer? (Do you want to meet me?)” The aforementioned dream-man, Nino Quincompoix, leaves his answer posted to photo booths around Montmartres: a Xerox of one of her photos, stating, “Où et quand? (Where and when?)”

In 2005, I was living in Ft. Myers, Florida, working with Americorps and Habitat for Humanity, building homes for low-income families in the area. It was, naturally, hard work, and I had joined Americorps after two years of college, leaving behind my friends and family before I really had time to assess what that would mean. I was perpetually homesick, and would call Cherie almost every day, longing selfishly to be sure that, even though I was gone, I wasn’t forgotten.

One day, as I was climbing out of the work van at the end of another long day, Cherie called me, and we talked much as we normally did. We talked as I hung up tools in the warehouse, and as I walked to my one-bedroom apartment on the grounds of the Habitat for Humanity property (which I shared with my amazing, tough-as-nails new roommate, Carrie.) I walked to the screened-in porch, still talking away, and opened the door, to find this attached to the handle: 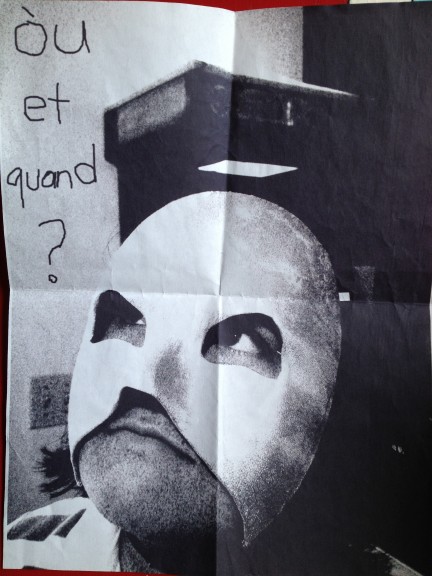 That, unfortunately, is my face.

I paused, then erupted into confused babbling: “What is this? How…what…who…? WHO LEFT THIS HERE?!”

I turned and looked to my right, toward the parking lot across the street, and saw Cherie barreling toward me, from where she’d been hiding. She ran, with her phone still in her hand, her arms outstretched, yelling, “IT WAS ME!”

If I could have married her then, I would have.

Over the years, Cherie has repeated her habit of showing up at my door when I need her most, like in 2008 in Lexington, when she surprised me on my birthday, which I had sullenly accepted I would be spending alone. Or after the birth of my child, when I was overwhelmed by the very idea of parenthood, and she spent her whole trip sitting inside with me and Anthony, watching episodes of Studio 60 on Netflix while we tried to figure out what we were supposed to be doing with this new baby. She’s visited me a dozen times since college, no matter how far away she lives.

A few weeks ago, I was finally able to return the favor. Anthony and I loaded ourselves, our daughter Lucy and two weeks worth of essentials into our car, and headed out to Austin, Texas, where Cherie is in the process of obtaining her Master of Global Policy Studies at the University of Texas’ LBJ School of Public Affairs. (I know, right? It sounds super impressive.) We were going there to spend time with Cherie, but we also had another, secret agenda.

I met Anthony when we were both working toward our MFA’s in writing at Spalding University in Louisville. He was instantly hilarious and engaging, and though we were both somewhat socially awkward and lived two-and-a-half hours away from each other, the inevitable courtship began. It was the perfect romance, in my opinion: laden with humor and rife with letters in my mailbox. He was, in fact, as good a pen pal (with benefits) as Cherie had always been (without benefits). It was like my own version of Amelie: silly, but endlessly sincere. These things, and others, of course, sealed the ol’ deal: I came to Yellow Springs and, in short order, moved in with Anthony, got a job at the illustrious Yellow Springs News and had a baby. We were, before I even realized it, a supremely happy family. Thus, when he asked me, driving to Ft. Walton, Florida this past Christmas, with Lucy snoozing in the back seat, to marry him, the answer was an unabashed: “Oú et quand?” 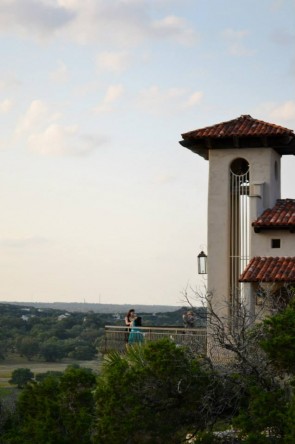 Chapel Dulcinea, on the campus of Wizard Academy, which is not what it sounds like. (Photo by Genevieve Saulter)

So, as we were making plans for our annual vacation, this year to Austin to see Cherie, we added one teensy detail to our itinerary: a quiet elopement in a little chapel on a hillside. There at the wedding, there were only a few of us: Anthony and myself, vaguely dressed for the occasion; Cherie’s brother and sister-in-law, Robert and Genevieve, as witnesses and post-ceremony donut-buyers; Lucy, who played in the dirt for the entirety of the event; and Cherie, who I would have married, no joke, that day in Ft. Myers when she showed my at my door, the best surprise of all time. As semantics would have it, she did, in fact, “marry” me, and Anthony: as an officially (online) ordained minister of the Universal Life Church, she officiated our wedding, bravely presiding over a ridiculous, but heartfelt, ceremony, which Anthony and I had penned the night before.

When you’re younger, just barely out of high school and blundering your way through your first attempts at adulthood, you can’t really believe that things will ever be different form the way they are. Your best friends will always be at arm’s length. They will always be the first ones to share your troubles. And they will forever be up for joining you at the mic on a Thursday night at karaoke, to belt the verses of Toto’s “Africa,” with little thought to their own dignity.

As it happens, right now, Cherie is on a plane to Africa. Specifically, she’s spending the summer at an internship in Uganda (seriously, impressive, I know). I will spend my summer here, thousands of miles away, trying to convince my toddler to please, please poop in the potty, and not in her bed, with Anthony, my newly-legal partner-for-life, cleaning up after our joint efforts.

Things are decidedly not the same as they were in college, and friendships change and augment and become something different. But there are myriad reasons that Cherie has been, is, and will always be listed as “Life Partner” in my phone: because she let my family come and stay in her apartment in Austin without a second thought, buying cereal for my daughter and letting that same daughter sleep in her bed. Because she painstakingly planned every restaurant we would visit during our trip, just like we did together in college. And because, simply, just like my daughter and my husband, I will love Cherie for the rest of my friggin’ life. How could you not love someone who would perform a spin-move as they presided over a wedding ceremony, just because you asked for it?

For that matter, how could I not be in love with every single one of my friends and family, who allowed, accepted and celebrated this marriage of two buffoons in love, which they could not attend? My friends Leah, Jennifer and Dayle, to whom I spilled the news, my sisters Hayley and Madison, and my own parents (and soon-to-be-in-laws), who said, “We get it, we love you, have a great time?” Nobody gets away with this stuff, except in the movies.

Amelie had a bitchin’ soundtrack, but I’ve come to realize that my own “fabuleux destin” is just as bitchin’. Maybe more. 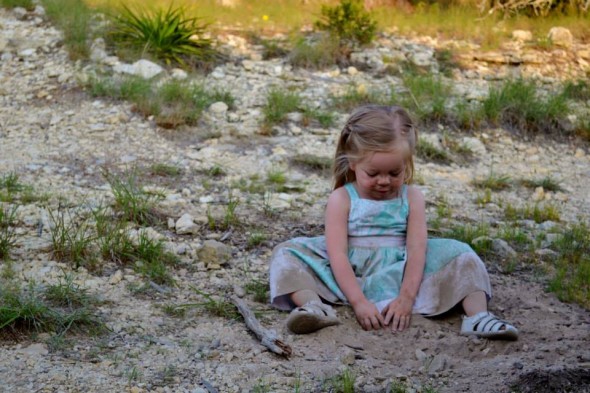 The kid knows how to celebrate. (Photo by Genevieve Saulter)