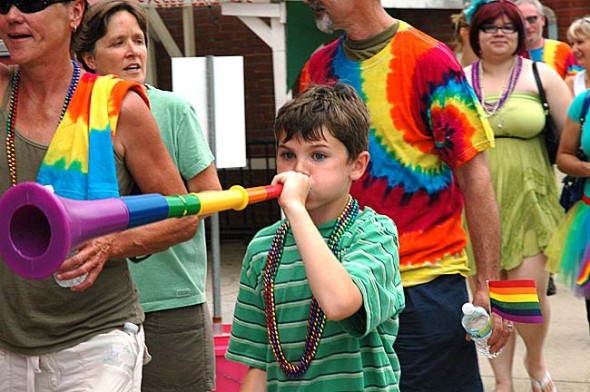 Pride weekend for all, take two

The largest gay pride event in the world takes place in São Paulo, Brazil, where annually more than 3 million people attend, while the smallest is in an Irish coastal village of 250 people. Yellow Springs Pride Weekend, in its second year, will likely fall somewhere in between. But as the only town in Ohio outside of a big city to host a Pride event and as a village known for its acceptance of different lifestyles, Yellow Springs has a lot to be proud about.

Even though “it’s Pride everyday in Yellow Springs,” according to Melissa Heston, an organizer, putting on a village-wide event each year is important.

“We have such an incredibly embracing community but there are times that these things are taken for granted, so it’s good to celebrate our diversity and inclusivity with this kind of event,” said Heston, who lives in the village with her female partner and their three children.

According to organizers, the weekend celebrates the diversity of sexual orientations and gender identities, promotes equal rights for the LGBTQ (lesbian, gay, bisexual, transgender, queer and questioning) community, raises awareness of anti-gay hate crime, bullying, HIV/AIDS and other relevant issues and honors the steps villagers have taken to advance the LGBTQ cause.

And while Yellow Springs is considered more open to LGBTQ people than other towns, intolerance can still be found within individual families, in the local schools, where anti-gay bullying remains an issue, and in Ohio laws that treat those in same-sex couples as “second class citizens,” organizers said.

“It’s a pretty important reminder that we need to stay vigilant and continue to educate people about treating everyone like humans,” said Holly Simpson, another organizer.

The Pride organizing committee is made up of local residents and Antioch College students.

Pride Weekend begins with a cocktail party at The Winds Cafe on Friday, June 14, from 11 p.m. to 2 a.m. featuring the music of DJ Juju. According to Heston, The Winds that night will have a “club feel.”

Pride continues on Saturday, June 15, at 4 p.m. at the John Bryan Community Center with speakers and educational booths. Among the speakers are Greene County Combined Health District on HIV/AIDS and the Buckeye Regional Anti-Violence Organization on violence targeting the LGBTQ community.

Villagers and Antioch College students will also give personal testimonials. Jay Rue, a first-year Antioch student who identifies as gender queer — neither as male or female — will speak on the gender-neutral pronouns, among other issues. Having come from a highly conservative town where being gay, lesbian or bisexual is disapproved of and being transgender is completely unacknowledged, Jay Rue chose Antioch in part because of Yellow Springs’ tolerance. Jay Rue feels Pride is a good fit for the village.

“At Street Fairs everyone is flying their freak flag so might as well put a rainbow up there as well,” Jay Rue said.

Following the talks the Flaggots, a GLBT color guard from Columbus, will perform. Then at 5 p.m. the Pride Walk Sidewalk parade leaves from the Bryan Center. At 6 p.m. Mayor Dave Foubert will present this year’s honorary parade marshals — members of the 2009 Human Relations Commission who urged Council to pass legislation creating a domestic partner registry in the Village.

At 6:30 p.m. the Dayton Gay Men’s Chorus will perform, followed by a full set from Tracy Walker, a Cincinnati-based neo-folk singer-songwriter who grew up in Yellow Springs. The evening ends with a Pride Drag Ball, a no-cover 18 and over party at Peach’s Bar & Grill featuring the Rubi Girls, a Dayton drag troupe, and the music of DJ Nordique from Columbus.

The final event, on Sunday, June 16, is a “We Are Family” potluck picnic from 11 a.m. to 2 p.m. at the lower shelter house at John Bryan State Park. Attendees are encouraged to bring their family and a dish to share. The purpose of the picnic is to celebrate and connect the many families of same-sex parents who live in the village, organizers said.

But Pride weekend is not just for those who are a part of the LGBTQ community; allies who stand in support of the cause are encouraged to attend as well. Pride organizer and queer resident Judith “Juju” Wolert-Maldonado said she found the high turnout of straight allies at last year’s event “encouraging and empowering.”

Johanna Smith is one such ally. She is once again busy “crocheting her little fingers off” to make the colorful bands of yarn that will decorate downtown trees and light posts Pride weekend, she said. Last year Smith helped yarn bomb before an unknown vandal systematically tore the rainbow decorations down. Smith said she is not discouraged by that “nasty” act and will again show support for a cause that is dear to her.

“I don’t know why this one [issue] touched me so deeply — I don’t have immediate family that is LGBT,” Smith said. “It somehow really resonates deeply with me and my sense of justice.”

While Pride events will also take place in Columbus, Toledo Cincinnati and Youngstown (Dayton had an event last weekend), organizers said it was important for the village to have its own event. Local queer resident Rachel Steiger-Meister agrees.

“It’s important to have it in your own community so your non-queer friends and family can show their love and support,” Steiger-Meister said, adding that a Pride event here can take advantage of Yellow Springs’ atmosphere of safety. Steiger-Meister, who teaches LGBTQ literature at the University of Cincinnati, sees that Pride can be especially valuable for the youth.

Last year’s Pride Weekend was thrown together in about two weeks but attracted more than 200 people. This year’s event is far more ambitious and hopes to bring in more of an outside audience, organizers say.

“Last year was more of a village event,” said Heston, who led last year’s efforts. “But we’re trying to open that up because so many people come to our village to be themselves — to walk up and down the street and not be harassed for holding hands or looking a certain way.”

The Village’s stand for LGBTQ rights dates back to 1975, when Council passed its first ordinance to prohibit discrimination based upon sexual orientation and personal appearance. In 2005 Yellow Springs became the first community in Ohio to pass a resolution opposing Ohio’s new constitutional amendment that defined marriage as between one man and one woman.

Then in 2009 a domestic partnership registry was created at the behest of Human Relations Commission members John Booth, Joan Chappelle, Ona Harshaw and the late Don Wallis, who are being honored as this year’s Pride parade marshals. So far two couples have used the registry. The HRC also proposed that new language be added to village ordinances to prohibit discrimination based upon sexual orientation to those selling or renting property locally.

“These were villagers who took the initiative to make our community more inclusive and less discriminatory,” said Wolert-Maldonado.