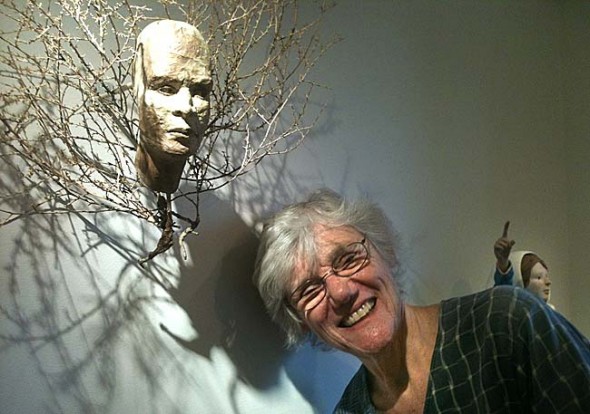 Local sculptor Alive Robrish’s new show, “Who are We?” will open at the Yellow Springs Arts Council Gallery on Corry Street on Friday, June 14. (Photo by Anisa Kline)

On June 14, Alice Robrish’s show, “Who Are We?,” will open at the Yellow Springs Arts Council Gallery on Corry Street. Combining ceramics, papier-mâché and a variety of natural and found materials such as wood, tumbleweed and old metal fencing, the figurative pieces explore the themes of identity and belonging implicit in the title of the show.

“The question encompasses who is the ‘we,’” says Robrish “Is the ‘we’ people who are as similar to me as possible? Or does it include people of different nationalities, ethnicities, sexual orientation and educational backgrounds? Does it expand to include our interdependence with the earth?”

In one work, a couple faces each other with angry expressions inside a box, the opening of which is covered by remnants of an old fence. Such pieces reflect that, for Robrish, the title also addresses emotional and psychological states in individuals.

Although Robrish has been a ceramics sculptor for decades, a workshop at the YSAC gallery last year introduced her to papier-mâché, and she has spent much of the past year experimenting with the new medium.

“It’s been really, really, fun to work with a new material” she said, explaining how the plaster molds she has crafted for her ceramic work can be adapted to create papier-mâché faces that she then sculpts to achieve variety and nuance in each piece.

“It’s the culmination of a year-long experiment” said Robrish of the 10 new papier mâché pieces that will be included in the show.

Robrish’s attraction to clay and natural materials was sparked during her childhood, when she spent a great deal of time exploring the natural world around her home.

When a neighbor who worked with ceramics invited Robrish to her studio to play with the materials, this tactile experience expanded to include clay. Although it was a single experience, it made a lasting impression on her.

“I really loved it and remembered it,” she said, and so, after the birth of her daughter, “I thought, ‘I’d love to do something with clay.”

What began as classes at a community college ended in Robrish completing a second degree in studio art at the University of Maryland. Robrish began to teach informally while also creating her own work and, by the early 1990s, was making a living as a ceramics teacher.

As much as she enjoyed teaching, Robrish found that the high cost of living outside of Washington, D.C. made it difficult for her to support herself financially while also finding time to create her own work. After coming to Yellow Springs to visit a friend in 2004, she began to consider moving here, drawn to the lower cost of living, close community and natural setting.

“As a child, I loved skunk cabbage,” she said. “I remember waiting in the spring for it to emerge. When I came to the Glen for the first time, I saw the skunk cabbage and thought “Yeah, this is it.”

“My friends thought I was crazy moving out here,” she said, “but given the difference in the cost of living, I could really focus on my own work.”

The relative affordability of Yellow Springs has allowed Robrish, over the years, to focus almost exclusively on creating her own pieces and to sell much of her work out of her studio — a practice that keeps prices lower and allows for more of a connection between the artist and her customers.

Nonetheless, like many shows at the YSAC gallery, Robrish will be offering a workshop in conjunction with the exhibit. During the workshop, called “Mask It,” participants will spend two Thursday evenings working with self-hardening clay to create a mask.

“It can be as realistic or as fanciful as a person would like,” she said about the workshop, which will be offered on June 20 and 27 at 6:30 p.m.

Although Robrish has lived and created art in the community for many years now, this show will be her first with the Yellow Springs Arts Council, an organization which she feels has done much for the artists in the community.

According to Robrish, the quality of the gallery, with good lighting, staff, a good location and a space for classes, plus the organization’s extensive internet presence “is a terrific service to the art community and the wider community. They nourish the connections between the artists in town. It enriches all of us.”

Robrish is particularly pleased that the opening of her show coincides with both the gay pride weekend in Yellow Springs and a visit from her daughter and grandchildren.

“Gay rights is an issue that is important to me,” she said. “My daughter is a lesbian, and she, her partner and their children will be here to celebrate with me.”