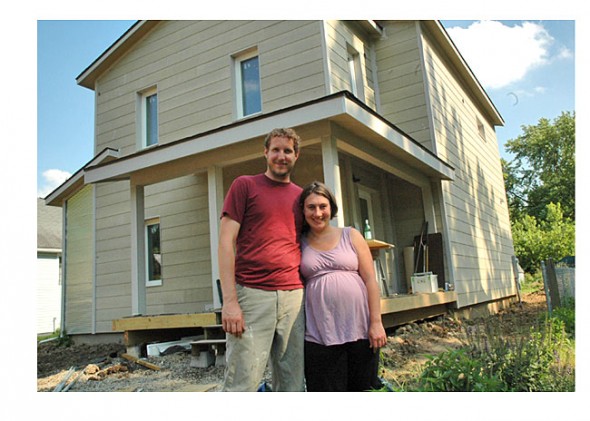 Andrew and Anisa Kline in front of their home on West Davis Street.

Green Generation Building will open its second passive house in the village on Saturday, June 22, to showcase its energy efficient building practices. The open house at 324 W. Davis St. runs from 1 to 4 p.m.
The residence is the home of Green Generation’s owners Andrew and Anisa Kline, who were encouraged to build again because of the success and comfort of their first project at 515 Dayton Street.
“Our first passive house went so well that we were excited and confident to build our own space that was just as comfortable and allowed us to live out our values to reduce our impact on the environment,” Andrew Kline said this week.
The idea of the passive house is to construct an envelope so well sealed and insulated that it uses 10 percent or less of the energy that a conventional home uses to heat and cool the interior space. Indeed, as with the Dayton Street house, the Kline’s own home is built rather like a picnic cooler, with the insulation values exceeding that of a conventional home by about 300 percent. The Kline’s home features Swedish-built casement windows that open and close like freezer doors, two feet of fiberglass insulation in the attic and 15 inches in the walls, bringing the insulation value to R 65 for the walls and R 78 for the roof. The house is so well insulated that for heating and cooling needs the Klines have just one small air to air heat pump to serve the whole house.
In addition to a tight envelope, the Klines also opted for another environmentally friendly attribute: a relatively small house. Their home is 1,700 square feet with three bedrooms and one and a half baths — though the cork floors, open floor plan and modern, neutral-colored finishes make the space feel large and warm.
The Kline’s home (not including the land) would be around $240,000 to build new, largely due to the increased insulation materials. But the savings on heating and cooling costs will offset its initial pricetag, and the active and embodied energy the house will use over its lifetime is significantly less than that of a conventional home, Kline said.
Both Anisa and Andrew grew up in Yellow Springs and are looking forward to raising their family in their home in the village.
“We’re happy to have permanently settled here and started a business whose aim is to build as comfortably and energy efficiently as possible.”