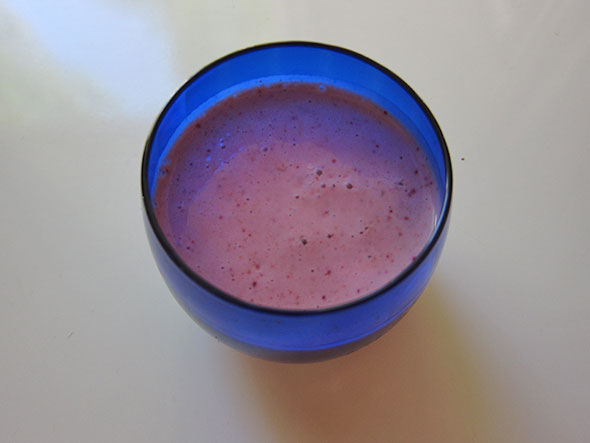 Somewhere in the spring, my daughter discovered the joy of getting the mail. Her discovery brought up sweet memories of trips across my childhood rural road to mailbox numbered 44D. My parents rewarded my efforts with my own mail: a subscription to Cricket Magazine. Among the amusing short stories and poems, wonderful illustrations, crafts, and cartoons, the magazine would included the occasional recipe which I nearly always tried.

Just about the time my daughter started carrying a stool out to the front porch to rescue armloads of bills, notices, and periodicals, a congratulatory message popped up on my Instagram feed. The James Beard Foundation awarded Publication of the Year to a children’s magazine called ChopChop. I visited their website, checked out a couple of back issues from the Yellow Springs Community Library, and—sincerely impressed—placed an order for a two year subscription. I thought, “What a fun magazine…just the thing to greet my children at the mailbox.” 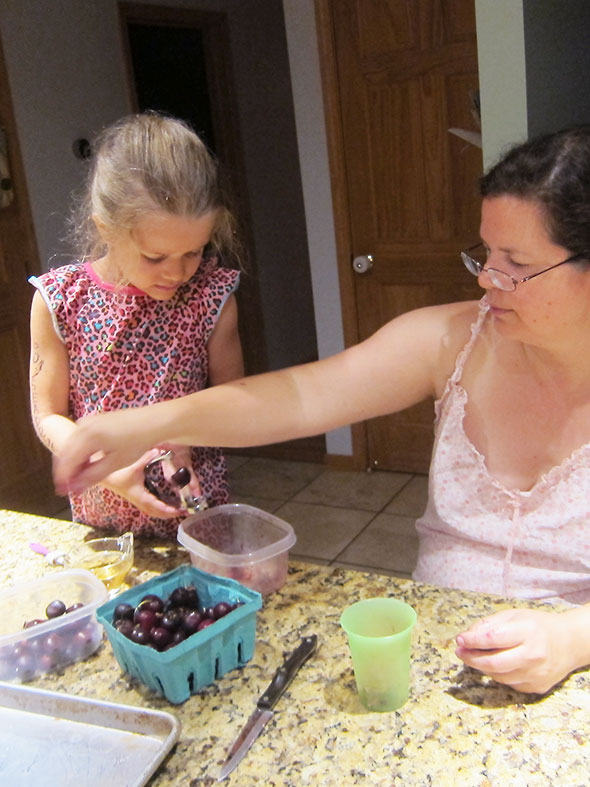 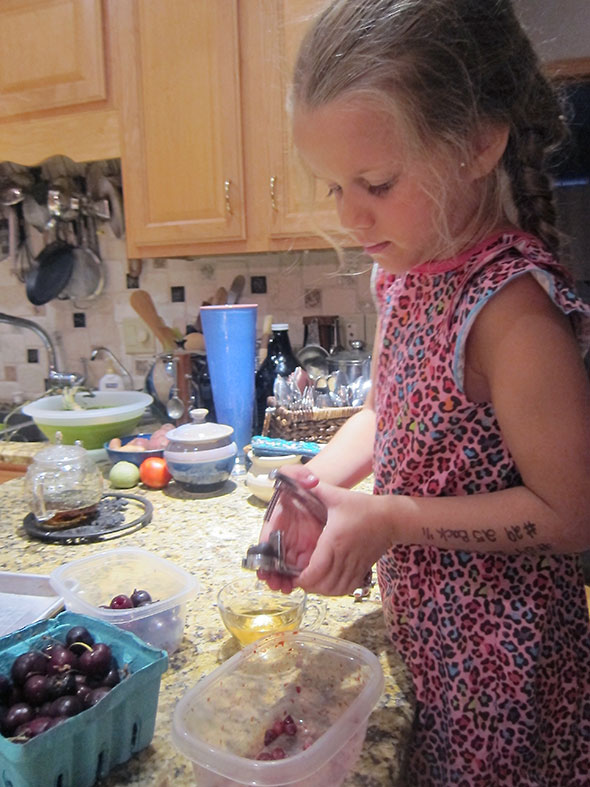 Their first issue arrived two weeks ago. We started to flip through the recipes and stopped on the second one: Cherry Berry Smoothie. Oooooo. That looked like a tasty beverage, and we just happened to have a quart of fresh cherries. The next morning we set about pitting a pint to freeze for the recipe. 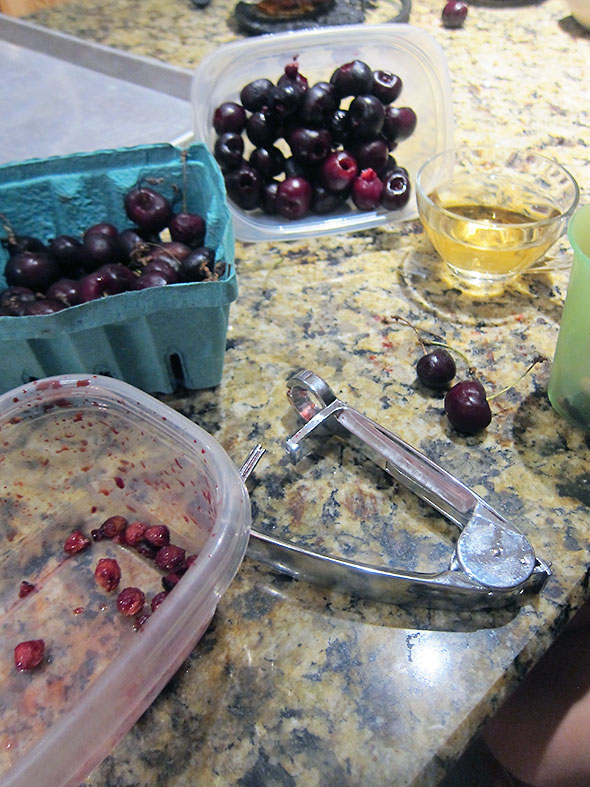 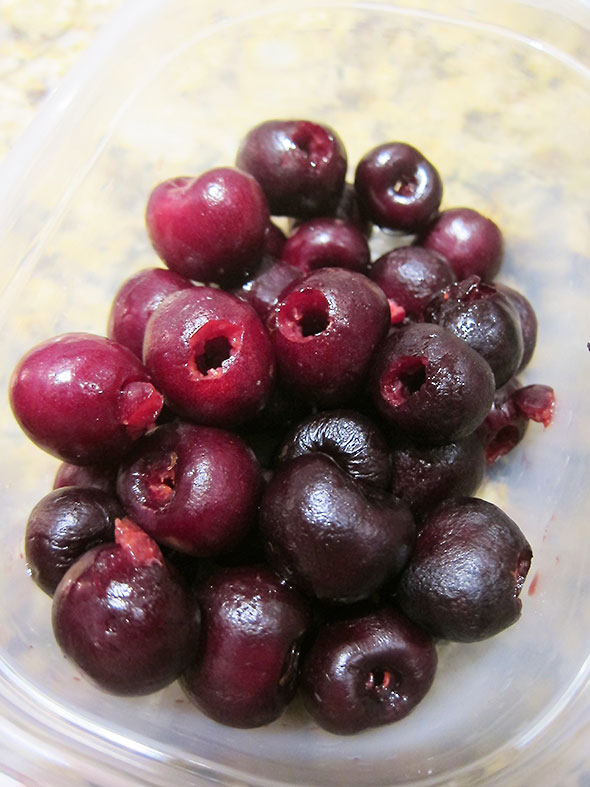 Pitting cherries is a messy task. It might even be tedious but for excellent companionship. As it was, we had a good time releasing the hard seed from the firm, juicy, burgundy fruit. In the division of labor, my daughter took command of the cherry pitter, fitting really since it belongs to her. We bought the pitter for her when she was one years old. We carried it in her diaper bag for dinners at the Winds Cafe in case she plowed into their complimentary olive plate which was often enough and until she could be trusted to not swallow the pits. 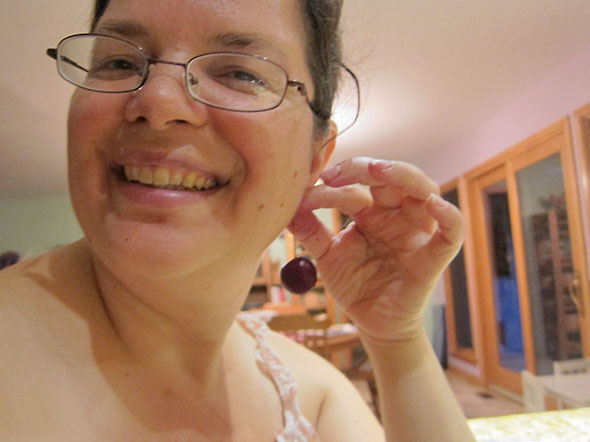 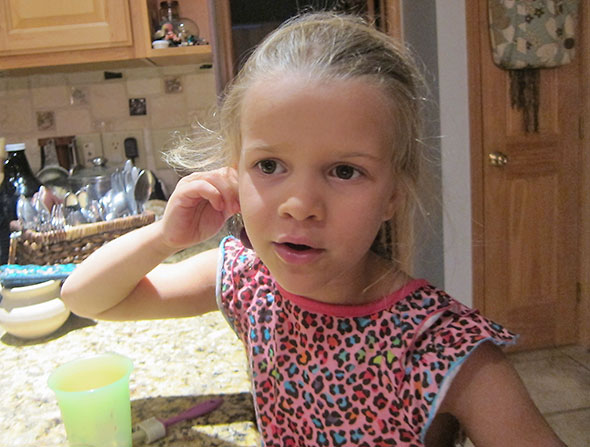 We moved through the pint of cherries in a cheery mood. I removed the stems occasionally imagining mine as earring. She imagined herself as an announcer confidently publicizing to stay tuned, EVERYBODY, for exciting CHERRY POPSICLES! At the last, she was a magician making cherries disappear. “Where’d they go?” 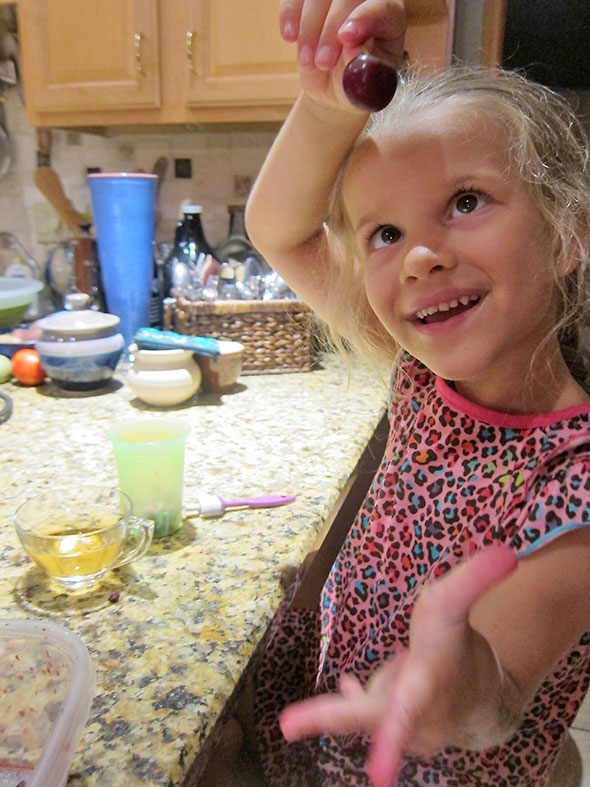 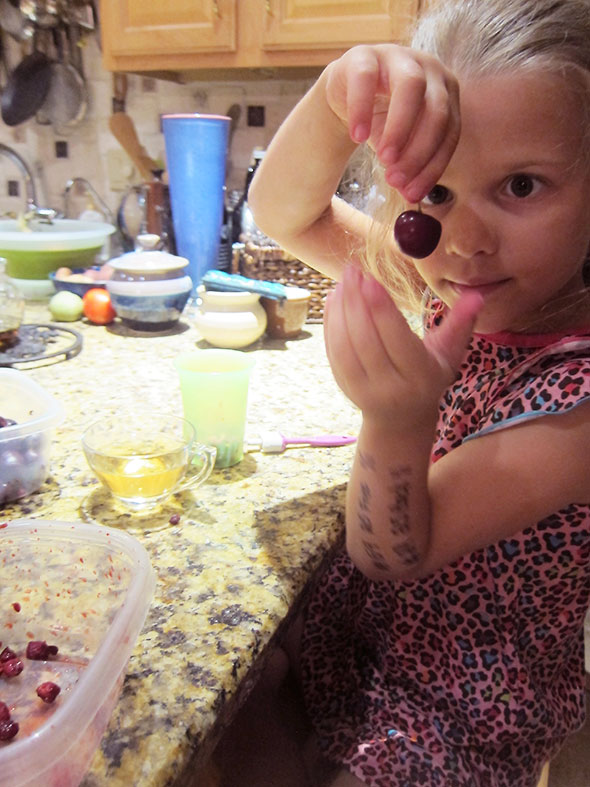 I suspect her tummy. The rest made it into the freezer along side some local strawberries also destined for a future smoothie. 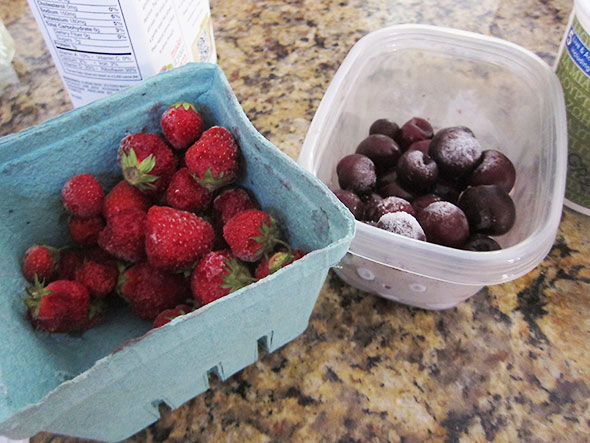 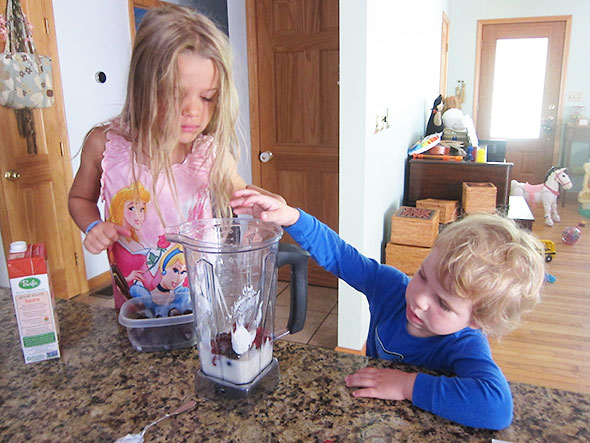 Yesterday, we broke into our store of frozen fruit to make the cherry berry smoothies. 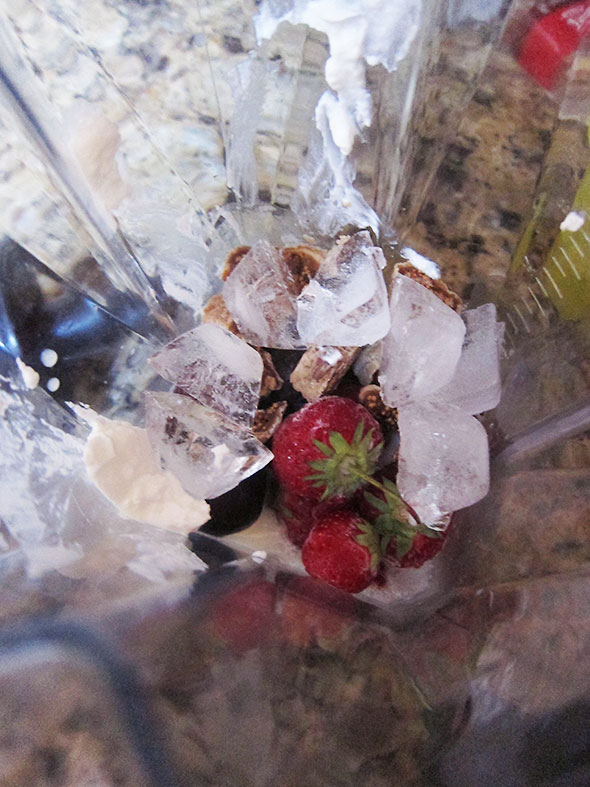 For our morning treat, we substituted almond milk for the 1/2 cup of milk and figs for the dates. I measured the 1/2 cup of almond milk first and then added the yogurt until the milk drew level with 1 cup. The kids added the frozen fruit and pushed the buttons on the blender. If the noise of the blender isn’t enough to wake a person up, the bright, foamy smoothie is just the thing.

Previously we’ve used bananas to sweeten smoothies. Figs make a lovely alternative which I’ll now use regularly. Along with the yogurt, adding the figs results in a smoothie that tastes more Indian lassi than anything else and, praise be, I love lassi!!! 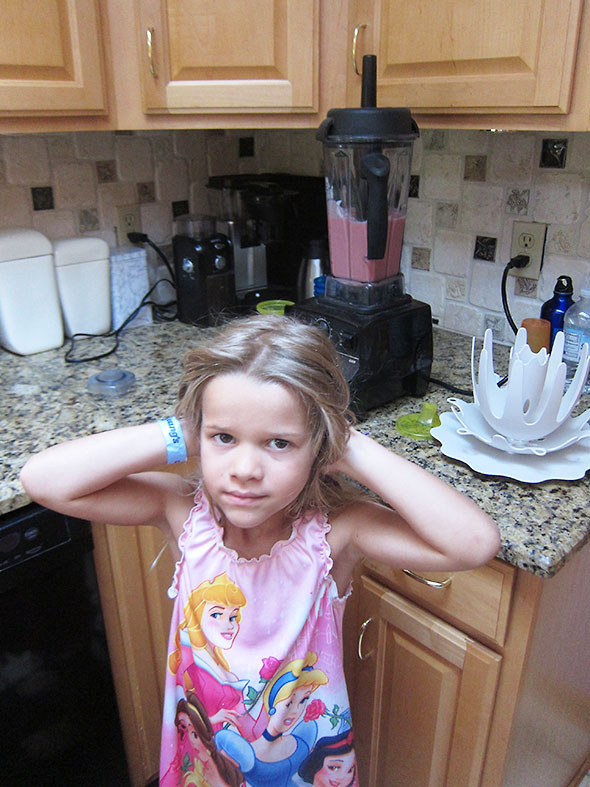 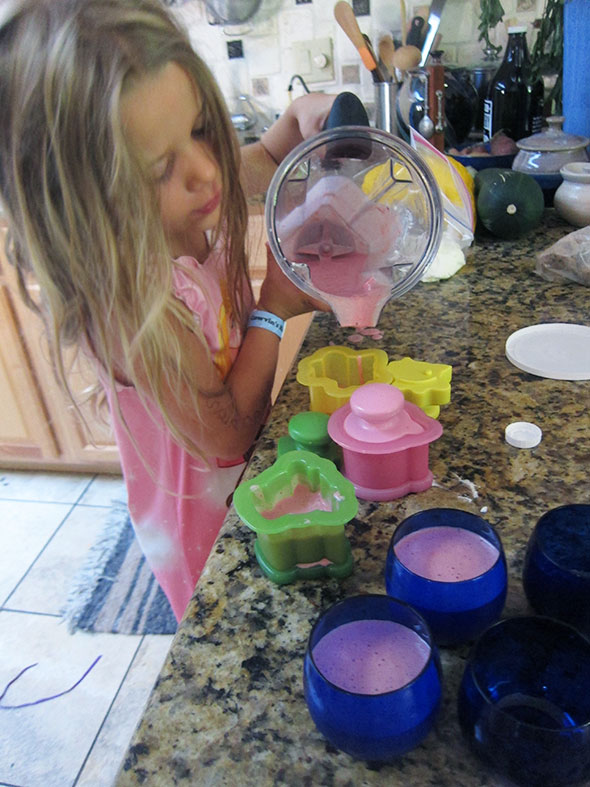 In the days between prepping the cherries and making the smoothies, my daughter had not forgotten what she was about. She got out our popsicle molds—in the shapes of a cow, a chicken, and a pig—and loaded them half full with about half the smoothie mixture. Next we popped them into the freezer to chill over night. 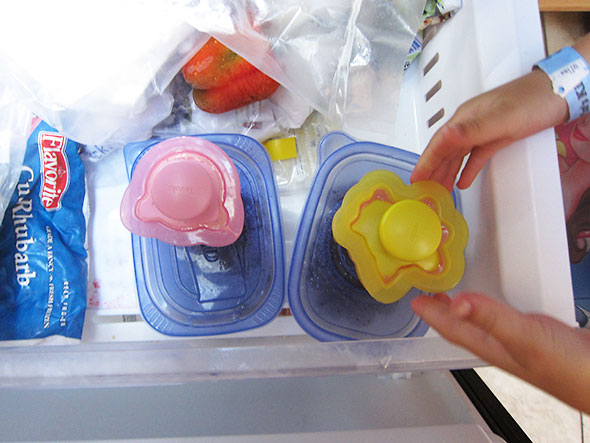