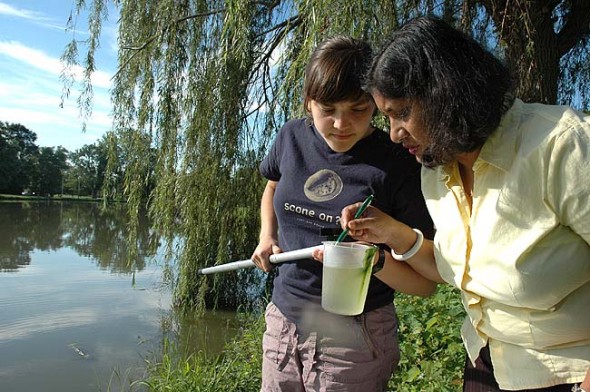 Assistant professor of biomedical science Savitha Krishna, right, and Antioch student Diana Harvey sampled the water at Ellis Pond this week in search of the larvae and pupae of mosquitoes that may carry the West Nile Virus. The Antioch biology class is working with the Green Environmental Coalition and Greene County Combined Health District to monitor and control the spread of mosquitoes in the village to prevent the potentially-dangerous illness. (Photo by Megan Bachman)

At a house along Livermore Street last week, the mosquitoes were so dense that the Aedes species — typically only active in the evenings — were out during the day in search of a blood meal. The Antioch College students looking for mosquito breeding sites at the residence left covered in bites.

The students, part of an Antioch biology class project working locally to eradicate the mosquitoes known to carry the West Nile Virus, are working in conjunction with the Greene County Combined Health District and the Green Environmental Coalition (GEC) this summer to prevent West Nile, a disease with usually mild symptoms that can, in rare cases, lead to inflammation of the brain and death.

After a rainy week, local mosquitoes are starting to multiply as they breed in unchecked standing water around town, bringing the threat of West Nile closer, said Vickie Hennessy of GEC this week.

“I’m really afraid that with all the rain we’ve had we’re going to have a lot of mosquitoes,” Hennessy said. “I was thinking earlier that we were doing well. People were telling me they hadn’t had many mosquitoes. Now it’s a whole other story.”

Because mosquitoes can breed in standing water in as little as 7–10 days, water should not be allow to collect anywhere on a property, according to Antioch assistant professor of biomedical science Savitha Krishna, whose students are helping to monitor mosquitoes locally. Krishna, who previously worked as a government entomologist in India fighting the spread of dengue fever and malaria, said West Nile is not as serious as those mosquito-borne diseases, which annually infect some 300 million people around the world, but is dangerous enough to warrant some attention.

“[West Nile] is one of the emerging diseases and it has to be controlled before it becomes out of hand,” Krishna said.

Residents are urged to get rid of standing water on their properties by draining gutters and downspouts, emptying flowerpots and other containers and covering up holes in trees, Hennessy said. And they should prevent mosquito bites by wearing insect repellant and donning long sleeves and pants outdoors, especially during dawn and dusk when mosquitoes are most active.

According to the Ohio Department of Health, while four out of five people infected with West Nile Virus will show no symptoms, about one-fifth develop a mild fever, headache and muscle aches and about 1 in 150 get a severe illness requiring hospitalization. These few may experience a high fever, stiff neck, disorientation, coma, tremors, paralysis and may die. Adults over 50, children under 16 and those with existing health problems are at a higher risk for developing the severe illness.

So far in 2013 there have been no human cases of West Nile Virus reported in Ohio and only 31 nationwide, according to the Centers for Disease Control. Last year there were 121 reported cases in Ohio resulting in seven deaths — nationwide there were 5,674 cases and 286 deaths. But spraying is beginning in some Ohio counties where mosquitoes carrying the virus have been found. Last week Montgomery County sprayed insecticides at Wegerzyn Gardens in Dayton after the virus was detected in mosquitoes there.

While GEC is getting the word out about prevention, Krishna is working with her students to find where in the village there are high concentrations of Aedes and Culex mosquitoes, the two species that carry West Nile Virus, as well as where they’re breeding.

“We have divided the village into quadrants and I’m hoping to continue the survey to identify where they breed more so we can focus our efforts,” Krishna said. Once an adult, a mosquito can fly up to three miles in search of food, so an unchecked source of water can affect the entire community, she added.

Those who need help identifying and eliminating mosquito breeding sites on their property can email Krishna at snkrishna@antiochcollege.org or call GEC at 937-767-2109. Villagers can also call the Greene County Combined Health District at 937-374-5600 to report a potential breeding site and request the use of larvicide.

At the Livermore Street property, Krishna’s students found larvae in tree holes and gutter downspout catches. They also figured out that a nearby pond by the Friends Care Independent Living Units was a major breeding ground for mosquitoes. After taking larvae samples for educational purposes, Krishna called in the county health district to apply larvicide at the pond to halt the lifecycle of mosquitoes there. The larvicides used by the county, Bacillus sp., do not harm wildlife, the environment or human health according to a GEC handout.

Last year when West Nile was detected in local mosquitoes on Southgate Avenue, the county health district sprayed aerial insecticides in a neighborhood on the south end of town. This year the Village has contracted with the county health district to only monitor mosquito havens, collect samples and apply larvicide when needed. At the request of the Village, the county will not spray aerial insecticides this year to kill mosquitoes, which Hennessy said is a toxic and inefficient way to control West Nile. Krishna agreed.

“Spraying, or fogging, should be a last resort,” Krishna said. “Here it’s not needed because you are throwing so much insecticide to the environment for so minimal an effect. Just using larvicide is more effective and safer for the environment.”

While local mosquitoes were frequently tested for West Nile Virus last year, this year the county will not test mosquitoes for the virus because a state program was cancelled when federal funds were cut, according to Mark Isaacson, program manager for the county health district. Counties must choose whether to pay for testing on their own — at an initial cost of $2,000 to $3,000 — or to opt out and this year Greene County has decided to forgo testing, Isaacson said. Krishna said that local mosquitoes can’t be tested for West Nile at Antioch because that testing requires a highly sophisticated lab and Antioch does not have the proper equipment or biosafety standards in its labs.

But, Isaacson said, by collecting and counting the number of mosquitoes in a given area, they can determine where West Nile is likely to strike. Towards that end, the county regularly monitors a handful of areas in the village, including near Southgate Avenue, and also has responded to complaints this year on Wright Street and Livermore Street.

Krishna and her Antioch students are hoping to sample the entire village with the exception of Glen Helen, which mostly hosts various forest species of mosquito that don’t carry West Nile Virus. This week they tested Ellis Pond and DeWine Pond on the north end of the village. Preliminary results showed minimal mosquito breeding activity at Ellis Pond, likely because of the presence of fish that eat mosquito larvae.

But residents are still on the hook to help prevent West Nile, Hennessy said. In addition to emptying any containers, flower pots, old tires, clogged gutters, buckets or tarps that contain standing water, villagers should replace the water in bird baths every few days, stock permanent ponds with fish that eat mosquito larvae and pupae, treat home ponds with Mosquito Dunks, which can be bought at local garden stores, and fill grassy areas that regularly hold water with dirt, she said.

“It’s really important for people to stay on it and make sure their yard is clear of any possible breeding grounds,” Hennessy said.

As for the threat this year, the summer breeding season — when female mosquitoes bite humans in search of a blood meal — lasts through September. But, she said, the eggs of the Aedes mosquito can survive for up to one year, so areas that can have standing water should be kept dry for at least that long.